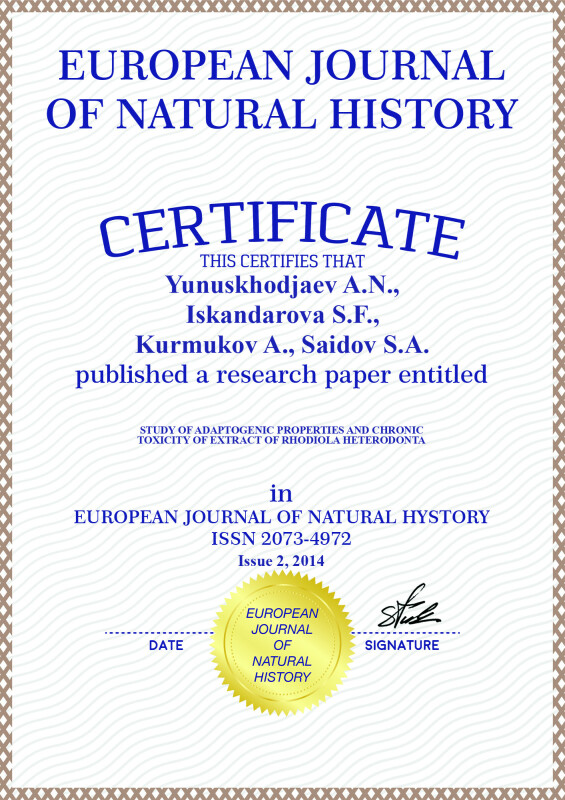 Daily life of contemporary human, especially the ones living in big cities and megapolises, is full of distressing situations and conditions related, in particular, to environment, nutrition, work and rest conditions, bad habits, low physical activity. All these reduces compensatory capacity of organism and leads initially to functional and then to organic changes of various organs and systems [8, 9]. Abovementioned factors has major effect on young organism of teenagers, at times resulting in irreversible health damage of younger generation and to a certain degree of gene pool of the nation.

Thereby in prevention of diseases significance of adaptogens and dietary supplements of various brands is increasing [1, 9]. Elaboration of preparation of this group produced from local raw materials and determination of the most effective one is an actual task [3, 8]. An example of plant which can be used as raw material for effective dietary supplement is Rhodiola heterodenta – perennial plant growing in Uzbekistan and seen in most mountainous regions of Central Asia. Roots and rootstocks of this plant contain polyphenols and in particular proantocyanidines [5, 6]. The research showed that extracts obtained from roots of Rhodiola heterodenta demonstrate adaptogenic effect and increase resistance of organism to stress-factors. The research also indicated low toxicity of preparations obtained from this raw material [7].

There are other types of allied species showing tonic, adaptogenic and other valuable properties. The most common type is Rhodiola Rosa [7, 10]. Unfortunately, significant side effects and contraindications limit its application. The extract of Rhodiola heterodenta may be an alternative to a certain degree [2, 6].

Aim of the research is the study of adaptogenic properties and chronic toxicity of extract of Rhodiola heterodonta.

To study the properties of Rhodiola heterodonta 75 % ethanol has been used. This is a dry powder with pleasant odor.

Analgesic activity was studied – method of tail compression with air bulb until squeal appears during pressure measurement in mm Hg.

Hypothermic effect of Rhodiola heterodonta on mice weighing 18–22 gm was studied by measuring body temperature in 30, 60, 120, 180 min and in 24 hours after introducing 50 mg/kg of the extract. In control group a simple distilled water in equal amount has been used orally (group 1), whereas comparison group was given oral acetylsalicylic acid 50 mg/kg (group 2). Experimental group was given the extract of Rhodiola heterodonta 50 mg/kg also orally (group 3).

Study of change of body weight under the influence of Rhodiola heterodonta: experiments were performed on 30 rats of both sexes with initial body weight being 175–195 g. The rats were divided into four equal groups: group 1 (control) were administered equal amount of distilled water; group 2 were administered 20 mg/kg dry extract orally obtained from the roots of Rhodiola heterodonta. Group 3 – 50 mg/kg and group 4 – 200 mg/kg. The preparation has been administered for 90 days. During the experiment body weight of the animals was measured 4 times: control measurement, day 9, 30 and 60 [3].

Chronic toxicity was studied on white outbred mice (does and bucks) weighing 18–22 grams. For experiment Rhodiola heterodonta was used in the form of 1–4 % spirit solution (15 % spirit) or in the form of 1-4 % water emulsion (elulsifier – apricot resin).

Influence of the Rhodiola heterodonta preparation (chronic toxicity) was studied on white outbred rats of both sexes weighing 160–180 grams. The animals were divided into 4 groups. Group 1 was administered 20 mg/kg; group 2 – 50 mg/kg and group 3 – 200 mg/kg. Group 4 was administered water in equal amount. The preparation was administered daily during one month orally. At the end of experiment the rats were killed under ether anesthesia by decapitation. Samples of organs such as stomach, small and large intestine, liver, kidneys, adrenals, spleen, lungs, heart, pancreas, aorta and brain were extracted [1]. At the end of administration period (preparation in experimental group and distilled water in control group) 3 rats of each group were killed on the next day. The organs and tissues of these rats were taken and placed into formalin. The remaining rats (3 in each group) were killed in 7 days after administration of the preparation was stopped – period required for regeneration of reversible (functional) changes caused by the preparation. All the organs and tissues in formalin were further investigated histomorphologically.

Tissue samples were processed with conventional histological methods, the sections were stained with hemotoxiline-eosine and examined under the “Leica-Biomed” microscope.

In control group pain sensation expressed as a squeal appeared in 30 min after administration of the preparation when pressure reached 93 mmHg; in 90 min with pressure 253 mmHg (P = 0,000), i.e. pain sensation became 126 and 153 % less respectively.

The group taking 200 mg/kg of the preparation did not demonstrate any weight gain which is probably related to early toxicity at this dose. Taking into account equal conditions of breed and nutrition, the reason for weight loss of the rats in the control group is related to stress caused by the daily process of introduction through the catheter to stomach. The rats taking 20 and 50 mg/kg revealed significant antisressor effect of these dosages. Weight gain lag in the rats taking 200 mg/kg may be related to early toxic effect of the preparation at this dose.

Comparative analysis of morphology of internal organs of all the groups having taken the Rhodiola heterodonta preparation at 20; 50 and 200 mg/kg dose indicates that the histological structure of internal organs is similar to the control group.

Stomach mucosa is well preserved, glandular cells are without specific changes. The section shows all the layers of stomach being well preserved. The mucosa is well defined due to numerous prolonged tubelike structures – fundal glands of stomach. The integumentary epithelium is formed by a single layer of glandular epithelium. This epithelium forms stomach pits which close up with glands. At the cellular level the body and fundus of stomach is composed of numerous parietal cells. Hysitomorphological analysis of stomach of experimental animals that were administered 20–50 and 200 mg/kg of the preparation shows that the tissues are comparable morphologically to control animals, and that Rhodiola heterodonta preparation does not cause any dystrophic changes.

Small intestine has pronounced villi and crypts, and enterocytes with a rim. The crypts of large intestine are deep, layered with mucoid cells, rift of the crypts is distended and filled with mucoid secretion. Enterocytes have cylindrical form and bright pink cytoplasm, enlongated nuclei located basally. Comparative study of histomorphology of small intestine of experimental animals that recieved Rhodiola heterodonta preparation at the 20–50 mg/kg and 200 mg/kg dose and of control animals revealed that they have common structure and we did not detect any significant variations.

Influence of extract of Rhodiola heterodonta on body temperature of mice (M ± m).

Liver of experimental animals did not show any noticeable morphological changes, hepatic plate and hepatocytes are well preserved, many binucleated hepatocytes, sinusoid hemocapillaries are moderately distended, stellate reticuloendotheliocytes have usual structure. Renal corpuscule, proximal and distal parts of Henle’s loop did not have any change.

Thereby the results of the research indicated that the extract of Rhodiola heterodonta has hypothermic and analgesic effect which may suggest presence of adaptogenic properties.

The results of chronic toxicity study also show that prolonged administration of the preparation of Rhodiola heterodonta does not adversely affect body weight of animals which may suggest presence of antistressor influence. Moreover, chronic toxicity study did not reveal significant morphological changes of structure in the studied organs. Based on the research results and on the fact that low toxicity is confirmed by other publications, suggested preparation may be considered safe therapeutic measure and be recommended for clinical application.

1. The extract of Rhodiola heterodonta show moderate adaptogenic influence and may be used as adaptogen.