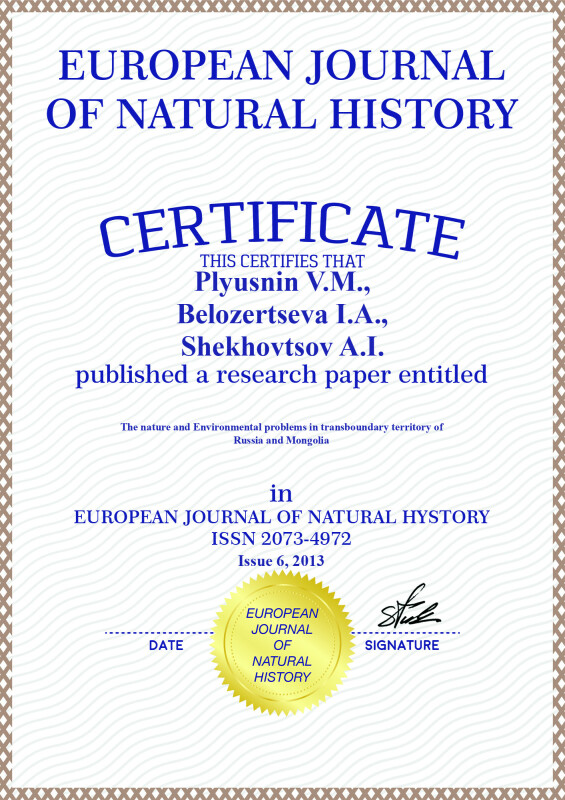 We examine the characteristic features of the relief, surface waters, soils, vegetation and landscapes within the Onon river basin. An assessment is made of the present status of natural environment. Environmental problems faced by the region are revealed.

The Onon river is 1032 km in length (with 298 km corresponding to the territory of Mongolia), and the area of its drainage basin is 96 200 km². The river originates in Mongolia at the eastern slope of the Khentii Mountains at the junction of the Khentiin-Nuruu and Ikh-Khentii mountain ranges on the territory of the Khan-Khentii-Nuruu National park; it flows on the Khentii-Chikoi Plateau (with islands in its channel); its lower reaches are between the Mogotui and Borshchovochny mountain ranges. At the confluence with the Ingoda, it produces the Shilka river. Within Zabaikalsky krai there is a broad floodplain of the Onon river. Its main tributaries are the Khurkh, Borzya and Unda (right), and the Baldzh-Gol, Agutsa, Kyra, Ilya and Aga (left). The main distinguishing feature of the climate across the territory is its sharp sentimentality. The unfavorable phenomena that cause damage to agriculture include frosts, draught, snowfall, dry wind, hail, floods, strong winds, and low and high temperatures.

In the physical-geographical regionalization scheme, the territory of the Onon river basin is at the junction of the two subcontitnents of Northern and Central Asia. The southern and middle parts of the basin refer to the Onon-Khentii depression-mountain taiga province of the Southern-Siberian mountainous region, the northeastern part belongs in the Upper-Amur steppizated-mountain taiga province of the Baikal-Dzhugdzha mountain-taiga region of the North-Asian continent, and the eastern part refers to the Onon-Argun (Eastern-Mongolian) mountain-steppe and elevated plains of the Central-Asian subcontinent. The relief and climate of the territory, and the specific character of their combinations predetermined the characteristic features of the region’s landscape structure. It is typified by a rich landscape diversity produced by a unique combination of mountain-taiga, mountain-steppe and steppe geosystems of the North-Asian and Central-Asian types.

A part of the territory of the Onon river basin is included in the Sokhondinsky State Nature Biosphere Reserve (Zapovednik). The protected drainage basin of the Onon river is given the name Onon Dauria in order to distinguish it from Argun Dauria and Ingoda Dauria. Three portions of the Khentii-Chikoi Plateau form part of Onon Dauria, Ingoda Dauria and Selenga Dauria. The plant kingdom of Onon Dauria is typified by a great diversity. The zapovednik’s territory includes the goletz belt and the forest belt of the Khentii Mountains. There are neither mountain steppe-prairies nor Daurian chaparral in the Sokhondinsky State Nature Biosphere Reserve. The Daurian prairie is a peculiar kind of forb and forb-grass Mongolian steppes which are grouped with a special type of vegetation. Kharganat (Daurian chaparral) is a highly peculiar kind of tree-shrub vegetation comprising xeryphytic (dry-loving) tree and shrub species of plants with the inclusion of steppe grasses.

The subalpine belt begins at altitudes higher than 2100 m above the sea level, in which open stands of Siberian stone pine and larch alternate with dwarf mountain pine overgrowth and luxuriant nival meadows in small areas. In the vicinities to the southeastern limit of the geographical distribution of dwarf mountain pine there occur Siberian spruce, Siberian fir and bilberries which inhabit the subalpine belt and the upper part of the forest belt. In the forest-steppe belt (the belt of exposed steppe) there occur many plant species characterized here by the western limit of distribution. They include Siberian apricot, elms, lily of the valley species (Convallaria keiskei), and others. The northern and northwestern slopes of the mountains at the outcrops of granites and granite gneisses are most often clad in pine forests, whereas larch forests cover the areas at the outcrops of clay shales on the slopes of the same aspect.

At altitudes of 1500–2000 m above the sea level, the upper forest belt is formed by Siberian stone pine together with Daurian larch; Siberian stone pine disappears at lower altitudes. At 700–1500 m above the sea level, the near-northern slopes of the mountains are most often clad in larch, pine, birch, aspen and mixed forests, often with undergrowth of Daurian rhododendron. True feather-grass steppes occur rarely in Onon Dauria. They tend to occur at high sandy above-floodplain terraces of the Onon. They do not form part of the territory of the zapovednik.

A part of the tract of the Onon river valley was plowed up for cultivation of grain crops, but this area is abandoned today and used as pasture. Traditionally, pastoral livestock husbandry includes sheep, horses and cows. Pasture lands are represented by areas with a moderate and strong degree of disturbance of steppe landscapes because of their low resistance. Steppes are comprised of feather-grass-fescue-wormwood vegetation. The sol cover of pasture lands is largely represented by chernozem (about 33 %) and chestnut soils (37 %). Chestnut soils occur more widely in the Aginsky district (63 %). The thickest layers of characteristic chernozems occur in the Mogotuisky district, more than 60 %. The region’s soils are highly sensitive to anthropogenic impact because of their shallow layers, detrital character, light granulometric composition and shallow occurrence of permafrost. Unregulated utilization of grasslands as pastures with an excessive pasture load (more than 4 head/ha) may well lead to dramatic disturbances to the structure and productivity of plant communities, mechanical destruction of sod cover, erosion and compaction of the upper horizon of soils, and microterracing of slopes to the extent of the formation of barren sand soils.

The Onon river basin is home to relict, endemic and narrow-areal, directly threatened species of vegetation in small populations, such as an onion species, namely Allium neriniflorum. This species is in need of the protection of its habitats. Overgrazing must be excluded, and gathering of this species must be prohibited.

According to data of the regional Ministry of Agriculture of Transbaikalian edge from 2010, from last 13 years nine were droughty. Day time temperatures reached up to +40 °С, and the soils got warm up to +61 °С. Atmospheric and soil drought became the reason of decrease in a level of subsoil waters. Sites oppressed and completely destroyed forest stands owing to long-term droughts and forest fires are revealed. On positive forms of a relief we marked the dried out birch forests. In 2011, forest fires affected most of the forested territory within the Onon river basin. In 2010 has burned down 62 thousand hectare of a forest, and in 2011 – 185 thousand hectare. With a multiple recurrence of forest fires, when forest litter and the humus horizon are heavily burnt, there are taking place an enhancement in soil turfness, a lowering of the level of frozen ground, and an intensification of erosion processes. Destruction of the canopy layer leads to swamping. Steppization processes are observed in forest-steppe landscapes following complete burning of woody vegetation. Under the effect of forest fires there occurs a decrease in acidity of the upper horizons of soils due to the fact that they are enriched with alkaline-earth and alkaline elements arriving from ash of the burnt biota. Humans are the primary source of forest fires in Transbaikalia. The fire-hazardous situation is aggravated by strong winds during the spring-summer period, and by the predominance of forests with readily inflammable undergrowth and forest litter.

From Russia, the Ashinga river (the left tributary of the Onon-Gol river) transports to the territory of Mongolia turbid flows of drainage waters produced by the activity of the «Baldzha» artel specializing in gold mining (Kyrinsky district of Transbaikalia). Extraction of gold is conducted by the open hydromechanized way. Nowadays, the artel members are tripping and grinding tens of kilometers of river valleys leave behind them in the place of a living spring «rock gardens», with heaps of gravels many meters long, and the rivers are becoming separated into a network of ditches. Officially, the artel’s annual output of gold amounts to 500 kg. For 20 years of the artel’s operation, 70 % of the rivers in the Kyrinsky district have been transformed beyond recognition.

During the last two years, 70–80 % of licenses have already been withdrawn from the ore mining and processing enterprises. However, turbid flows of drainage waters continued to flow toward on the Arshinga and from the mine in the upper reaches of the Baldzha river (Baldzh-Gol river) (Figure). The artels were granted for development and exploitation the territory of the plain of the Kirkun river (the left tributary of the Baldzh-Gol), one of the major rivers within the Onon basin, flowing to Mongolia. Water of muddy drainage drains in the upper reaches of the Baldzha concern to a sulphatic class of group of calcium II of type and have a mineralization of 670 mg/dm3. Also the increased mineralization water of the Kirkun river differs (420 mg/dm3). She though concerns to a class hydrocarbonate waters of group of calcium II of type, but has higher contents of sulfates – ions concerning other rivers.