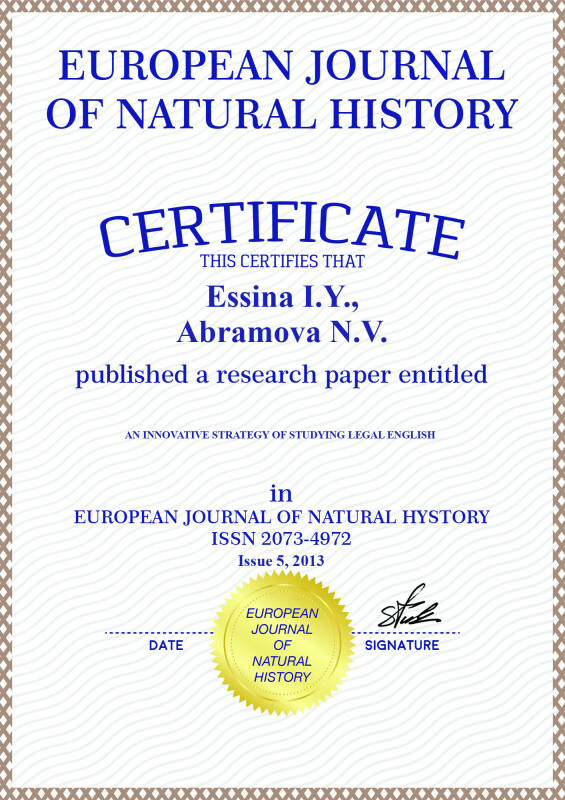 This article describes a technique for helping teachers impose students’ activity and make the ideas presented in this article instructive. The problem of studying legal English effective strategy can be illustrated by case study projects through Russian fairy tales, folk-tales of the British Isles and American funny stories.

The method «case study» was first applied to Harvard Business School in 1924. Its essence is that the students are offered to understand the real or fictional life situation. This situation reflects not only any practical legal problem, but actualizes a certain knowledge to be learned in the solution by means of a foreign language. The purpose is to teach students, both individually and in a group: to analyze the information given in a foreign language, to sort it out for solving a given problem, to identify key issues, to generate alternative solutions and to evaluate them, to choose the best solution and form a program of action etc.

As a specific method of teaching, the case study project is used to solve educational problems. The main problems of the case study project are technologization and optimization, methodological training in the use of various types and forms. Being an interactive method of teaching, it won a positive student attitude. The students see it as a game that provides development of theory and practical application of the legal foreign language material. The important fact is that the analysis of situations impacts rather strong on the professionalization of students. The case study project helps to their growing up, creates interest and positive motivation towards learning a foreign language in the aspect of the upcoming professional lawyer.

Case study project is a role-playing system. This system combines the technology of the game with a fine intellectual development and total system control. But in any case, a Case study project is an effective means of building professional skills of learners. It has its source as an intellectual product: the real daily life, the situation relating to various aspects of the legal profession and the results of scientific research, etc.

Cases study project can be classified as follows:

The teacher can take easily the position of «consultant», and an «expert» depending on the type of interaction with the audience.

The work of case study project includes: planning, carrying out a project, and reviewing. It directs students for research and discovery learning. The students work out a wide range of initiatives: receiving stories and making from them a legal document, using their own strategies, explanations and proposals and develop their communicative competence. As students dive into a real situation the teacher must give them creative freedom and a sense of importance of their work from start to finish. Such activities create an atmosphere of trust and help students to escape the boring and routines during the process and make innovation easy. Moreover, the effective way in studying legal English is to put together interaction and collaboration among students. It requires the teacher to stimulate working towards his or her objectives.

Russian fairy tales and Americans funny stories are full of conflicts. Some of them are external or internal. It is a conflict that impressed students most and they make a great deal of efforts to make up legal documents (claims, brief, drafting memos, applications contract and so on) basing on the plot of the given material.

At the beginning of each task appropriate instructions are given. The first stage is explanation of the nature of the activity. The second stage is writing a legal document. Students have a story either a fairy tale or a funny story. They use cognitive strategies, and make a plan of the project. Having studied the problem, the students begin face to face communication, creating a stimulating polylogue and then producing case study project. The remarkable feature of the project is to use idioms, proverbs, sayings and idiomatic expressions. The idiom decorates student’s oral and writing speech, accumulating mentality in changed forms. Using idioms the students get into English imagery world and improve metaphoric representation of reality.

Thus, the key words on which the idiom is built up help students to recreate the native speaker’s mental picture. It will inspire them to think and find out specific connotations and associations. At the final stage, students present factual case study project, formulating arguments and justifying their opinions.

The following example is based on «Moral speculation» after O. Henry Step 1. The students are to read the story and to give its summary: After a long search, a man (Jeff) who wanted to have a partner in business found a fellow. His name was Ruff. He was famous for pig stealing. As the man wanted to have an obedient servant, the fact of stealing pigs did not worry him. Jeff preferred fraud to honesty. Ruff had to come and help Jeff to trick people, by playing cards with some casual passers-by. Everything seemed to be going well, but Jeff could feel in his bones that something was wrong. As it turned out Ruff had not come and did not keep his promise. Ruff showed his true colours. He stole the pig. The stealing had become a habit for him. He brought the pig home. But the pig was squealing all night, disturbing people. Moreover, Ruff tried to sell Jeff the stolen pig, putting in the advertisement. And Jeff took it by this device and got into a mess. As the matter of fact, Jeff ran the Wall Street principles: buy low and sell high. However, he wanted to have a large fee too, buying this pig. He did it. But he couldn’t realize the following principle: «Light purse is heavy curse».

Step 2. The students are to compose a brief of a possible case:

Factual allegations’; Plaintiff Jeff, on December 19... at approximately 10 p.m. was at home. It was a black day for him. He was disturbed by the noise. He had just fallen asleep when a load squeal woke him, causing him to believe that something awful had happened. He knocked on the wall to keep the neighbour quiet, alleging that honest people couldn’t get their rest. As it turned out, the load squeal belonged to the pig that has been brought by the defendant. The plaintiff was greatly frustrated by this situation. Next morning he had a deal with the defendant. He bought the pig in order to return it to the circus. He couldn’t realize what was happening during the deal, because he was not in the least sleepy the night before the deal. The sum of the deal (800 dollars), which was like a bolt from the blue for him. He has his back to the wall.

Cause of action: Infliction of emotional distress.

As a proximate result of infliction of emotional distress sustained because of the defendant, the plaintiff had suffered mental distress. Although he was a person of ordinary sensibility, he was greatly frustrated by the situation in which he had been involved intentionally. The plaintiff was unable to work and was placed on a long term disability. The plaintiff alleged that all charges for medical services and damages he had sustained during the deal because of his mental state should be imposed on the defendant. By the reason of the defendant’s infliction of emotional distress, plaintiff has been damaged in sum of 800 dollars.

Total damages sustained: Plaintiff’s health was damaged in the sum of 400 dollars.

Step 3. Practical part of the research. Explain the idioms in the case mentioned above.

So, case study project is a natural component of legal language teaching. It is the ideal way of making students to enhance their legal language proficiency for growing practice in writing and speaking skills by engaging them into legal language environment.

The work is submitted to the International Scientific Conference «Actual problems of science and education», Germany (Dusseldorf, Cologne), 1-8 November 2013, came to the editorial office оn 17.09.2013.