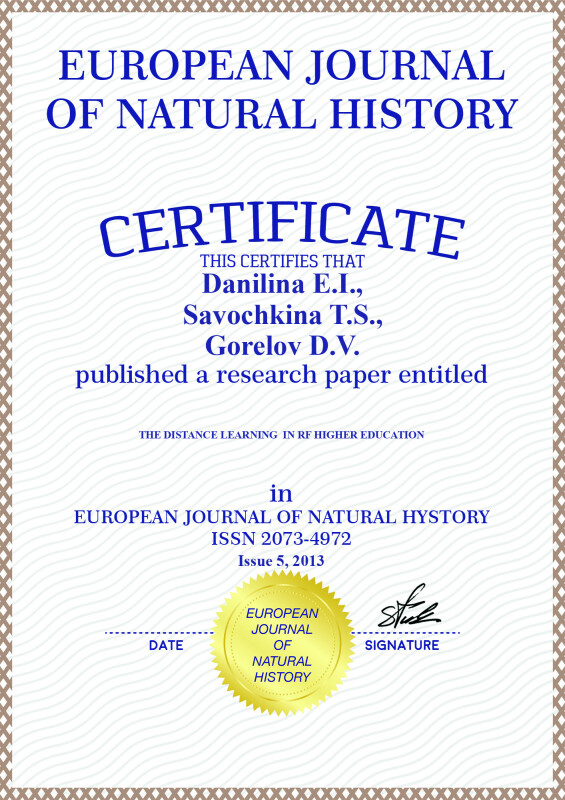 The strategic goal has been set by the state program of the RF education modernization – to be developed the necessary measures and the corresponding arrangements for the further higher education development in Russia up to the best world standards level, with the subsequent its integration into the international scientific, research and education community.

The urgency of this indicated challenge solution has been laid in the fact, that the higher education system is being directly involved in the participation of the intellectual capital creation, the role of which is being constantly increased under the market economy. At the same time, the education expenditure is not regarded, as the deduction from the national income, but, as rather investments, having brought their return in the future.

This challenge statement is supposed the basic directions rethinking of the higher education development, which is, practically, included in itself the assessment of the previous gained experience in this sphere of the human activity, the rationale, which are applied to the current realities of the studied disciplines list, in the context of the current trends and their directions, and as well as also the professional skills enhance of the teaching faculty staff, at the forms and the teaching methods improvement. In the light of the foregoing, it can be stated, that the modernization has its own the peculiarities and the specific features. This is explained by the fact, that, under the errors assumption, the consequences are borne the long – termed, the heavy, and also the destructive character in the sphere of the higher education. If to be recalled the recent past, then, it is undeniably obvious, that it had been gained the considerable intellectual potential, the strong infrastructure of the higher education, which had no analogues in the world, in terms of the development level and by the obtained results, in the years of the Soviet power. But, at present, the available resource has already been limited and exhausted, in this sphere, to that is put forward the solution of this considered challenge in the priority ones number.

In the light of the foregoing, the distance education organization and its further implementation cannot be carried out without taking into account the modernization overall directions of the higher education. Though, at their determination, it must be based on the goals and the tasks, which are set before the higher education, and that are determined by the needs of the national economy and the society, as a whole. The task had been set the reproduction provision of the qualified and skilled labor force before the reforms conducting for the higher education, which was due to the need to be more fully met the ever – growing material and cultural needs of the population. At present, this challenge is urgent and actual in the industrially advanced countries and the developed powers, but, at the same time, it is related to the intermediate stage in the development and the further improvement of the modern society. The primary purpose of the higher education in the XXI-st century – is the all – round development ensuring of the personality, his and her spiritual, moral, physical improvement and their further perfection, which, in aggregate, will be created the intellectual and the scientific potential of the society. That is exactly, it will be the main and the decisive production factor, which will be acted, as the measure of the social wealth and the society further development, as a whole. In this connection, the education humanization has already been become in the number of the most priority objectives in the industrially advanced countries and the developed powers, and for the socio – economic sciences and the humanities reading is allotted up to 20 % of the training and the study time. So, the distance teaching introduction can be made the significant contribution to the solution in this challenge, due to the computerization of the teaching process.

At the same time, the separately taken challenges will be solved quite difficult at the distance education introduction and the further implementation. This is the extra expenditures for the technical facilities, and the getting access to the information sources, the telecommunications infrastructure, that is, the challenge of the rational use of the funds is being arisen, having allocated to the education, in general, and to the higher education, in particular. Therefore, at this time, the independent branch development of the economic science, namely, the economics of the higher education is especially important and actual. So, it is seemed to us, that the object of this science should be the effective use provision of the allocated the material, the financial, and the human and labor resources, and which are directed into the sphere of the education, under conditions of their deficit and the scarcity to be achieved the objectives and the targets, which have been set before it. This is due to the fact, that the educational services provision is the specific final product item, under the market conditions. Thus, the main attention is practically paid to the optimal combination challenge of the paid and the free higher education. This is connected with the inability of the higher education financing only at the expense of the state and the public funds, as it has been evidenced by the experience of the industrially advanced foreign countries and the developed foreign powers. It is seemed appropriate to the presence of the state order for the specialists training, at the expense of the state and the local budgets, which is based on the personnel marketing, under conditions of the market economy, which is involved the production forecast of the demand for the specialists of the given profile.

In accordance with the foregoing, the higher education modernization must be accompanied by the theoretical foundation development of the educational administration. As the formation – is the specific final product under the market conditions, then it should be subjected to the laws of the market economy and the economic management methods. In our turn, we support the position of those scientists – economists, who are considered, that the added value is being increasingly created in the service sector, including the impact upon the education system, under the current conditions. Thus, there should be overcome the viewpoint on the non – production sector of the national economy, as well as the scope of the minor one, in which the national income is not being created, and, which should be financed just from the budget. For all this, the residual method of the education financing was, practically, subjected to its removal and the further elimination, according, to which, first of all, the funds had been allocated for the manufacturing sector. So, it is advisable to be recalled the Academician’s works of S.G. Strumilin, who still in the twenties of the last century, has been studied the dependence of the national income growth on the education level [2]. The further development S.G. Strumilin’s ideas have already been got in the works of the national researches. Under the current conditions, the investing into the human factor and its capital are being considered the most promising, efficient, and effective ones in the industrially advanced countries and the developed powers.

As the national economy further development is, practically, followed and subjected to the general laws and its regulations, under the market economy conditions, then, its production and non – production spheres and the sectors management improvement should be conducted on the basis of the common principles. In particular, the management in the manufacturing sector and its sphere has been passed on the way of its decentralization, its significant functions change of the Ministry, the further their relationships reviewing with their subordinate enterprises. In this regard, it is presented quite appropriate to be expanded the higher education Institutes’ and the local authorities’ rights, the school boards and councils creation, which have been largely transferred the financing functions, including, on the basis, of their active in the entrepreneurship further development. So, the Ministry of Education and Science activities is being focused on the standards development, its implementation constant monitoring, the labor force market study, the functions performance, having had the nation – wide significance.

1. The Creation and Development Concept of the Distance Education Single System in Russia: It Has Been Approved by the Resolution of the State Committee of the Russian Federation (RF) on the Higher Education dated from May, 31. –
1995. – № 6.