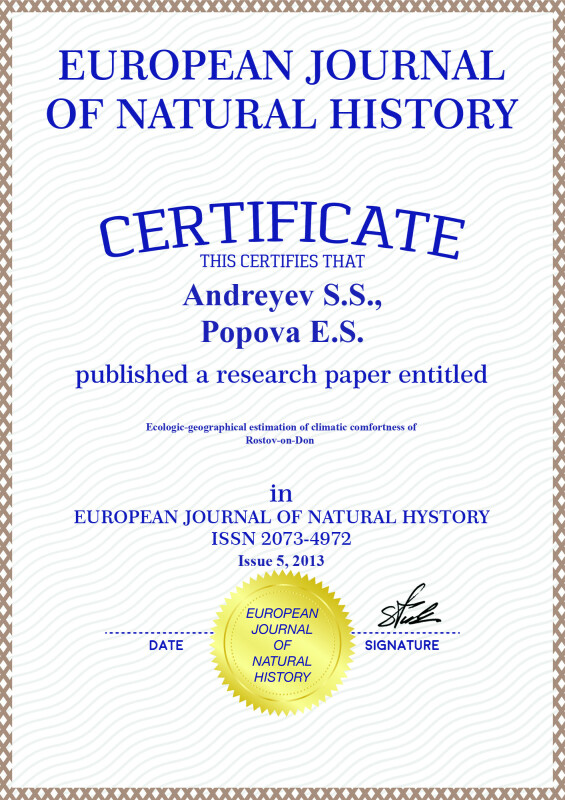 Climatic comfortness of a territory plays a prior part in establishing preservation of health, conditions of people’s life and activity, therefore, it should necessarily be considered while estimating natural-resource potential of a region.

Our environment is exposed to simultaneous impact of a number of factors, and their influence cannot be estimated by simple addition. Optimal conditions of life environment for any person are individual and they are limited by stress areas and limits of survival, set by each single factor of the environment and their cumulative influence.

Special features of geoecological estimation of natural environment that also include climatic comfortness, are studied from different points of view: thus, E. Odum [4] considered that the main goal of ecological estimation of natural environment is to answer the question: how many organisms inhabit a given area, where they can be noticed, and why.

According to N.F. Raymers [5], ecological estimation of natural environment is a process of defining condition of life environment and the degree of its exposure to the impact of various factors (considering an impact dynamics).

Works of V.V. Dmitriyev [6] contain the following concept of the procedure of ecological estimation of natural environment:

1. Defining aptitude of natural complexes and their components for organisms’ life.

2. Parametric definition of conditions of natural environment that provide for existence of living organisms’ communities.

3. Receiving an «ecosystem portrait» according to multi-criterion basis, and comparing it to a «perfect portrait» of the same ecosystem.

4. Subject-objective criterion estimation of the condition of natural object from the position of stable function of biocenosis.

Besides, each of the provided definitions contains its special feature that is significant for different specialists (a geographer, biologist, ecologist, mathematician, etc.) that create «portraits of natural ecolsystems».

The concept of climatic comfortness, suggested by S.S. Andreyev [1, 2, 3, 7], includes the following definitions:

1. «Comfort» (an optimal psychophysiological condition of a person the provides for his normal vital activity in places of permanent or temporal living).

Methodic of estimating climatic comfortness of a territory, suggested by the authors, implies realization of six stages:

a) analysis of physical-geographic conditions of a territory and creation of climatic database;

b) ranging and selecting the most informative indexes;

c) creation of bioclimatic database according to calculation of the selected indexes;

e) zoning the studies territory according to indexes of the most informative indexes.

Calculation of indexes for estimation of climatic comfortness of Rostov-on-Dos and Sochi has been put into the Table.

1. Andreyev S.S. Climatic comfortness of the territory of Southern Federal district and its zoning according to the calculated rates of pathogenicity index and coefficient of the atmosphere self-cleaning potential // Meteorology and hydrology. – 2009. – № 8. – Р. 100–105.

3. Andreyev S.S. Anthropocentric approach towards geo-ecological estimation of climatic comfortness of a territory at the example of Southern Federal district // Modern problems of science and education. – 2009. – № 6. – Р. 18–19.

6. Dmitriyev V.V. What is ecological estimation and how one can create an integral index of a natural ecosystem condition // Ecology. Safety. Life. Ecological experience of civil and social initiative. – Gatchina, 2001. – Р. 225–237.

The work is submitted to the International Scientific Conference «Prospects of development of the university education», Russia (Sochi), 26-30 September 2013, came to the editorial office оn 19.09.2013.