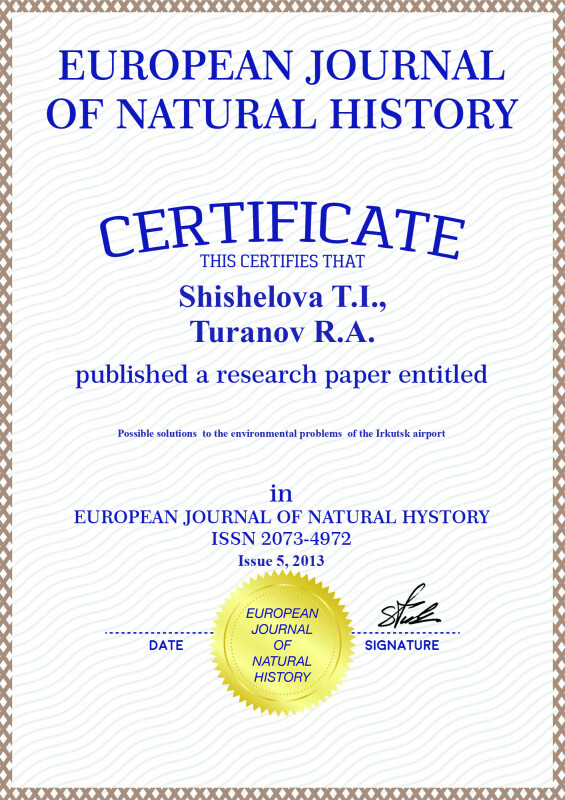 Possible solutions to the environmental problems of the Irkutsk airport

Nowadays a plane has become the fastest mean of transport for a modern person, it allows one to travel between continents in hours, and an airport is a «business card» of any country of city.

Along with the development of aerial transport many airport complexes have transformed into large enterprises and come close to city borders. Therefore, residential areas, districts of mass recreation, and suburban areas have been exposed to an intense impact of aviation noise.

Nowadays noise atmosphere around airports that are located in heavily inhabited districts, becomes an urgent problem not only in Europe, but also other parts of the world. A special anxiety among the population is defined by an increase in a number of flights and night sleep disturbance. The level of noise pressure in residential areas exceeds the allowed limit significantly under the impact of terraneous plane engine operation. Its maximum can have the same digital value as the amount of transport noise on main streets of a big city.

However, the problem of aviation noise is not solved for a number of Russian cities. It refers to the population of Irkutsk. Sources of noise can’t be eliminated, by they can be isolated. Regarding the Irkutsk airport we can say that re-locating the airport further from city borders would be the most efficient method considering the ecological side of the problem and measures of increasing safety. The problem of a new airport will be discussed closer to 2016. Limiting noise levels around airports is a condition of further aviation
development.

At the same time, modern airports operate round-the-clock and require a constant supply of high-quality illumination. Normal operation of an airport requires a complete adherence to strict international regulations. It also refers to illumination, as incorrespondence with certain requirements can lead to emergencies and death of people.

Incandescence lamps and luminescent lamps are generally used as the basic light sources. However, these sources of light affect a person’s health and the environment.

A significant part of an incandescence lamp radiation lies in a short-wave part of infrared spectrum, and such radiation, unlike its long-wave analogue, is hazardous for a person’s organism, especially for his eyes.

All luminescent lamps contain quicksilver, and, if any destructions take place a lamp body, organisms of people will be exposed to the affection of quicksilver fumes that are accumulated in an organism and damage a person’s health, therefore, special conditions of utilizing such lamps are required.

Besides, such lamps consume a significant amount of energy, produced by city heat power stations. All discharges that enter aerial pool from heat power stations are toxic substances that affect people’s organisms and environmental ecology.

An increase in requirements towards reliability of light-signal equipment complexes and omnipresent introduction of energy-saving technologies define a necessity to replace the used light sources with more efficient and ecological analogues. Light-illuminating diodes possess the highest characteristics, their service period reaches 100 000 hours, and their luminous efficacy equals 170 lumen/Vt. In comparison, incandescence lamps of general purpose have 100 hours of service period with a luminous efficacy of 8–17 lumen/Vt. Considering the provided information, light-illuminating diodes can be used in construction of a new airport of Irkutsk, as they aren’t only more ecological, but also energy-efficient and consume less energy from local heat power stations.

The work is submitted to the International Scientific Conference «Ecology of industrial regions of Russia», Great Britain (London), 19-26 October 2013, came to the editorial office оn 30.09.2013.