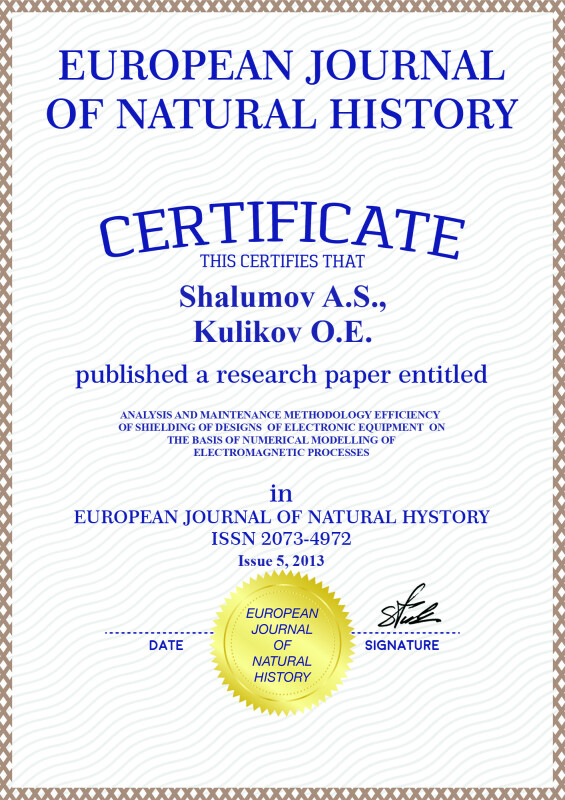 – the analysis of design EE;

– input of parametres of influences in subsystem ASONIKA-EMC;

– calculation of efficiency of shielding;

– depending on the received results, revealing of problem sites of a design and entering of necessary changes into a design [1–5].

Let’s consider each of the stages set forth above in more details.

Following stage in the developed methodology is project creation in subsystem ASONIKA-EMC. The project is understood as a directory of file system in which are stored:

– the file of the project created in subsystem ASONIKA-EMC also contains all data entered by the user necessary for carrying out of calculation;

– a file of the imported three-dimensional model of a design if import was spent;

– a file of the generated macro in language VBScript which is transferred to an input solver;

– files of results in a binary format solver;

– files of results in a text format which are read out and displayed in subsystem ASONIKA-EMC.

After project creation the three-dimensional model of the block is imported to subsystem ASONIKA-EMC, or the sizes of the typical block and the data necessary for calculation are entered.

The purpose of the preliminary analysis of a design is the choice of one of possible variants of representation of a design in subsystem
ASONIKA-EMC.

If the block has the non-standard form the model of the block created in the CAD-editor, it is necessary to optimise preliminary for carrying out of certainly-element modelling of electromagnetic processes.

After optimisation carrying out on the above described algorithm, from formats STEP or IGES import of three-dimensional model is spent to subsystem ASONIKA-EMC.

Then it is necessary to enter parametres of electromagnetic influence to which the design will be exposed. For this purpose in subsystem ASONIKA-EMC there is a special master of input of parametres
of influences.

With the help the master of input of parametres of influences the following data is entered: influence type;

– a format of the task of vectors;

– a position of a source of excitation (in system of co-ordinates of model);

– the data about a vector of polarisation of electric field;

– the data about a vector of distribution of an electromagnetic field.

Adjustment of a settlement kernel allows to define such parametres as frequency of calculation, an order of basic functions, to set a range of frequencies. Also at this stage adjustment of the adaptive analysis is spent.

Adaptive process of generating of a grid of final elements solver consists of following steps:

1) initial network which includes installations of approximation of a surface is generated;

2) if consolidation of a grid of splitting on the basis of length of a wave is required (lambda refinement), a settlement kernel carries out it, using the length of a wave calculated in a material;

3) splitting mode, and degree of consolidation of a grid is calculated;

4) using the received grid of splitting, the settlement kernel calculates a method of final elements electromagnetic fields which exist in structure when they are raised on frequency of the decision;

5) other decision, with use of the condensed grid is generated;

6) settlement kernel repeatedly calculates an error, and iterative process (the decision – the analysis of errors – adaptive improvement) repeats, while criteria of convergence are not satisfied or the maximum number of adaptive passes set in options solver is not executed;

7) if calculation in a range of frequencies settlement kernel Ansoft HFSS solves a problem on other frequencies without the further consolidation of a grid of splitting is set. The adaptive decision is carried out only on the specified frequency of the decision.

Following stage in a technique is calculation of efficiency of shielding on the basis of the data about intensity of a field in settlement area under the following formula [1]:

Essence of algorithm of revealing of problem sites of a design consists in the following. At first the material of which the case is made is analyzed. If it is not a conductor it is necessary to replace it with a material with good conductivity. If the case is made of a spending material a problem place are apertures and cracks in the case which influence is necessary for eliminating.

Apertures can be executed in the form of other-wordly wave guides, or to cover with a shielding grid, and instead of linings from dielectric rubber between case parts it is possible to use linings from spending rubber, or rubber in a metal braid.

After modification of a design, it is necessary to create anew model for calculation by a method of final elements and to carry out all technique set forth above until due efficiency of shielding will be provided.

Research is carried out within the limits of the Program of basic researches of National research university «Economy Higher School» in 2013, with financial support of the Ministry of Education and Science of the Russian Federation, the grant of the President of the Russian Federation for the state support of young Russian scientists
№ MK-7052.2012.8.

5. Semenenko A.N., Shalumov M.A., Malov A.V., Kuli-
kov O.E. Working out of a technique of identification of thermal parametres, methods of cooling and modelling of thermal processes in radio-electronic means of any design//Dynamics of difficult systems. – 2012. – № 3. – P. 106–110.