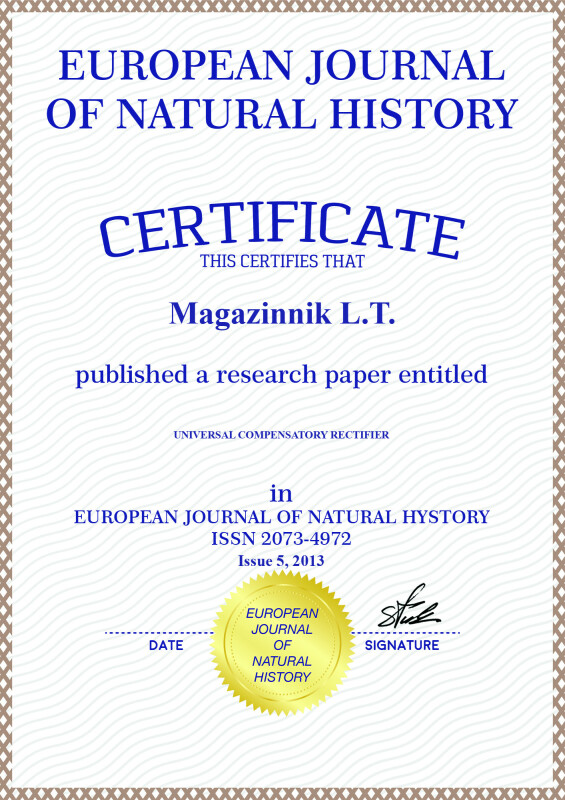 Article in PDF
416 KB
Thyristor rectifiers (TR) have found a wide use in electric drive, electric technology, electrochemistry, and other sectors of industry. Efficiency rate of powerful TR equal up to 97 %, However, consumption of reactive power Q under regulation of output power remains their negative side. A lot of various devices of artificial commutation (DAC), aimed to transit TR into the regime of generating Q into power network have been studied.
Analysis of their multiplicity allows one to conclude that only two of the known types of DAC provide for a free circulation of reactive commutation power between network, load, and commutative condensers [1, 2].

A tool that has been introduced in [2] is simpler than [1] and allows one to replace the function of transiting TR into the regime of regenerating Q into the network with the function of artificial commutation in load of current, autonomous inverter, direct frequency transformer, and other loads of active-inductive nature of frequency. Analysis and estimation of DAC elements, and also examples of coupling compensatory thyristor rectifier with the mentioned loads is the objective of this article.

In order to generalize and simplify the analysis, we provide a «classic» example of using compensatory TR for powering a current engine anchor (Fig. 1). Matching transformer (MT) is supplied with low-voltage voltage-adding winding W3 that is connected according to the secondary winding W2, therefore, voltage on the commuting condenser Cc is higher than the range of linear voltage at the clamps of winding W2 in the beginning of commutation.

At the moment of commutation start, for example, keys SW1 and SW2 close under leading angle β (Fig. 2), and current i1 from thyristors 1 and 6 (Fig. 1) transits to the corresponding diods of bridge WD2 and further to the load through SW1 and SW2. Current i1 decreases under the impact of voltage in condenser Cc, and all current of load Id goes through the condenser by the beginning of the first stage. At this moment keys SW1 and SW2 close, thyristors 2–6 turn on, and a part of electromagnetic energy of the motor is inverted into the network under the impact of self-induced electromotive load, voltage in the condenser increases, and current in thyristors 2–6 increases up to the load current Id.

A special feature of the studied FAC is its ability to lock and unlock thyristor rectifier under any angle of activation: 0 < β < 180oel, in other words, work with generation as well as with consumption of reactive power. Besides, presence of unipolar condenser of high capacity provides for a «gentle» commutation with overvoltage limitation at any defined level.

Traditional methods are used to calculate operation regimes and elements of DAC. They are characterized by forming and solving differential equations of commutation contour [4] that is relatively cumbrous and requires graphical constructions. Below we suggest the method of energetic balance that is based upon the equality of energies that flow from the network and return back within a commutation cycle (with no losses).

Commutation energy of the 1st stage:

where Еcc1 is energy under condenser discharge; Ulm is range of linear voltage considering voltage-adding winding W3 (Fig. 1); Ulm·К1 is maximum and Ulm·К2 is minimum voltage on condenser, in other words, range of ΔU pulsation.

Suggesting that there are no losses in condenser, network voltage is permanent during the commutation period, and commutation current alter linearly, conditions of energy balance of condenser and network will look as:

LS can be easily defined through the voltage of short circuit Us:

Relation of energy during the period π/m, where π/m = 6 for the bridge scheme, in other words, inter-commutation equals (%): то есть за межкоммутационный период состав-
ляет в %

The example of connecting a rectifier
(Fig. 1) to autonomous inverter is studied in [3]. In order to connect to reverse loads, for example, reverse electric drive of current or to a direct frequency transformer in parallel to the condenser, devices of artificial commutation are connected through a bridge of four thyristor distributors (Fig. 3).

1. Output of current from all power thyristors of a rectifier can be carried out almost instantly in a compensatory rectifier, equipped with the described device of artificial commutation. It allows one to use the rectifier not only for current loads, but also for powering autonomous thyristor inverters, direct transformers of frequency, and other loads of alternate current with frequency up to 150 Hz. Commutation of the rectifier, as well as loads are carried out by a common commuting device.

3. Since commuting device can manage commutation of the rectifier and load of autonomous inverter, for example, it takes place not on transistors, but on simple thyristors, it removes limitations in load power.