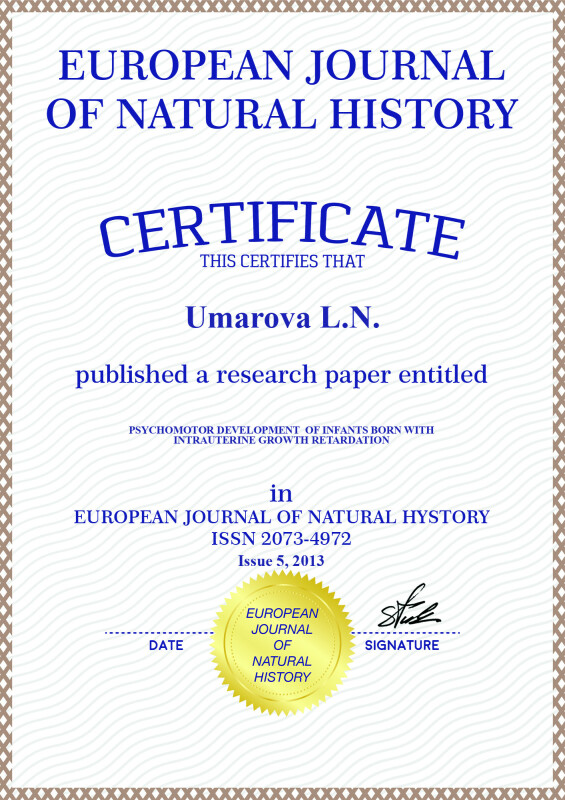 The birth of infants with intrauterine growth retardation (IUGR) is an outcome of unfavourable circumstances in prenatal period, and may be the cause of pathological conditions at an early age, which considerably effects on all body functions including psychomotor development. Considering that the performance of psychomotor development is a reflection of the level of biological growth of the infant in the first months and years of life determines the quality of his life in later periods of growth, the relevance of the study of this problem is undeniable.

The aim of the study:

To study the psychomotor development and the formation of physical activity for children with intrauterine growth retardation during the first three years of life.

Materials and Methods: The study of NPD low-birth weight infants with IUGR was estimated with L.V. Druzhinina, I.D. Dubinin method for the first three years of life. It was formed two groups of infants;

Results: Evaluation of neuropsychic development (NPD) in infants with IUGR was conducted in the first three years of life. The analysis showed that the most pronounced deviations in NPD took place during the first year of postnatal development: with IUGR in 13 infants (31,7) %, and in control group – in 2 (5,4 %). In small babies, backlog was primarily in motor and speech development. Quantity of overall motion in babies with IUGR was less in 10 (24,3 %) cases, which was significantly (P < 0,05) different from the control group 3 (6 %). Significant differences were obtained in infants when studied mental development of infants with IUGR.

Thus, to the end of first year of life in this category of infants backlog in speech development was observed in 7 (17 %), whereas in control group it was only in 1 (2,4 %) child.

But at the same time, when studied NPD of infants with IUGR 16 (39 %) who began attending infant schools at the age of 2, in 4 (25 %) children determined inhibition in the acquisition of new skills of speech and motor functions. From which it was concluded that such a regression may have been related to the difficulties of adapting to a new social environment, which can be considered as a failure to provide an adequate response of immature structures of central nervous system.

Thus, from the above it can be concluded that:

1. Inhibition in NPD in hypotrophic babies most pronounced in the first year of life.

2. In infants with IUGR in 2 and 3 year of life are revealed backlog in motor and speech development.

3. Low birth-weight babies require much attention and individual approach, for the first three years of life, not only to maintain their physical health, but also to create favourable circumstances for their full-grown mental and physical development.

The work is submitted to the International Scientific Conference «Fundamental and applied researches in medicine», France (Paris), 14-21 October 2013, came to the editorial office оn 13.09.2013.