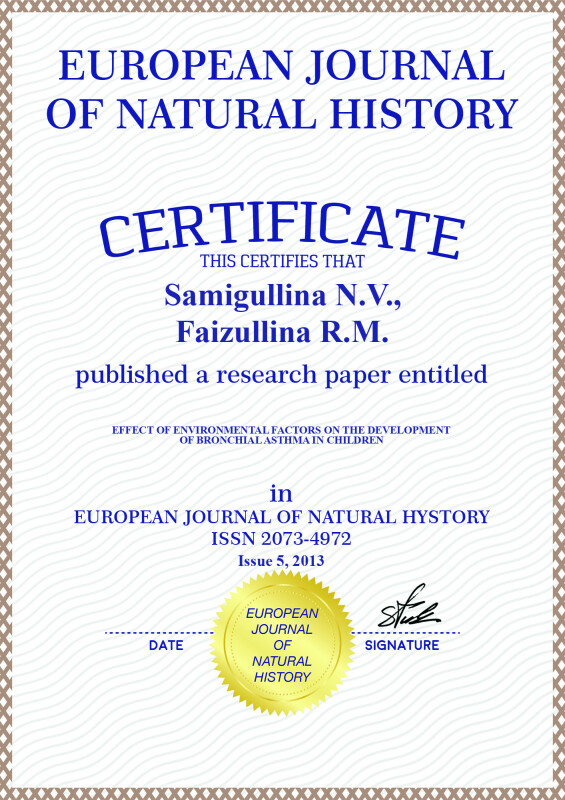 Bronchial asthma (BA) is one of the most common allergic diseases. The authors conducted a study to determine the role of the impact of environmental factors in the development of BA. We studied 148 children with a diagnosed of asthma in fact (the main group). As a control, we examined 156 healthy children with an early age recurrent episodes of bronchial obstruction. We investigated the medical documentation of the patients (outpatient cards). In the statistical analysis we used nonparametric methods. Differences in relative indicators were studied by Fisher’s exact test. Among the study group of children for intermittent disease was observed in 53 (36,3 %) children, mild persistent – in 46 (31,5 %) children, moderate persistent – in 32 (21,9 %) children, severe persistent – in 15 (10,3 %) children. The duration of dispensary observation was on average 6,0 [4,0, 8,0] years. Early manifestations of allergy were observed in 137 (93,8 %) children, including atopic dermatitis occurred in 128 (89,8 %) children, food allergy- in 134 (92,6 %), drug allergy – in 64 (43,8 %) children, acute urticaria and angioedema – in 77 (53,1 %) of the children, nasal congestion with no evidence of viral infection- in 76 (52,3 %), contact dermatitis – in 54 (37,0 %) children. Adverse environmental factors of the microenvironment are making a great contribution to the development of BA. We set significant differences between groups for the following factors: the presence of upholstered furniture and carpets in the bedroom (82,9 %), keeping the books on open shelves (prolonged contact with house and library dust) (65,3 % of children), the presence in the house of flowering plant (contact with pollen and fungi in soil) (86,3 % of children); dampness and mold in the apartment (contact with fungi) (67,8 % of children), the presence of gas stoves in the kitchen and the lack of fume cupboards (contact with nitrogen dioxide and other chemicals) (85,6 % of children), living near major highways, industrial plants and other ecologically unfavorable objects (67,8 % of children). In summary, we found that the studied group of children characterized by intermittent course of the disease, early onset of allergic symptoms and more exposed to adverse environmental factors.

The work is submitted to the International Scientific Conference «Fundamental and applied problems of medicine and biology», UAE (Dubai), 16-23 October 2013, came to the editorial office оn 05.09.2013.