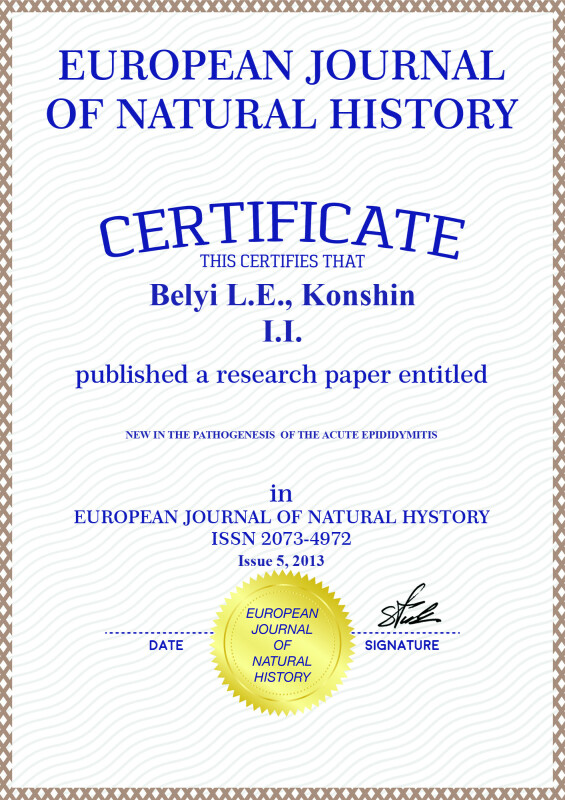 NEW IN THE PATHOGENESIS OF THE ACUTE EPIDIDYMITIS

The problem of diagnostics and treatment of an acute epididymitis demands separate treating as often the choice of a method of treatment has empirical character and depends only on personal preferences of the clinician. As a research problem the proof of existence of a phenomenon of an intrascrotal hypertension (ISH) was nominated at acute epididymitis at men. It is known that pressure rising in the closed cavity harmful influences the course of the main pathological process. Under observation there were 80 patients with acute the epididymitis. Middle age of 28,3 ± 3,6 years. Existence of a serous form acute epididymitis, confirmed histologically was criterion of including in researches. At 34 (42,5 %) patients the disease was accompanied by development reactive hydrocele among which at 21 (61,8 %) the ISH was observed. The group of comparison consisted of 20 healthy men who don’t have in the anamnesis of indicatings on transferred diseases of organs of a scrotum. Measurement of intrascrotal pressure was carried out by the technique offered by us. Research of a hemodynamic in a testicle and its appendage was carried out by means of an ultrasonic dopplerography. Average value of intrascrotal pressure made – 14,4 ± 2,4 cm of water column. During research it is established that depending on existence / lack of an ISH at acute inflammatory processes in organs of a scrotum profiles of development of disorders of a hemodynamic essentially differing from each other take place. At acute epididymitis, not being accompanied ISH, the blood flow in a testicle and its appendage undergoes changes in a type of hyper vascularization and depression of vascular resistance (Ri in intratesticle centripetal arteries 0,24 ± 0,03, and in arteries of an epididymis 0,37 ± 0,01). At acute epididymitis, being accompanied an ISH, the mechanical compression of vessels of a seed funicle, conducts to disturbances of hemodynamic that is at the bottom of rising of a resistance of a vascular bed (Ri in intratesticle centripetal arteries made 0,81 ± 0,02, and in arteries of an epididymis 0,67 ± 0,02). Disturbances of a blood flow in vessels of an epididymis develop much quicker and begin at lower level of an ISH, than disturbances of a circulation is immediate in the testicle. (the augmentation of intrascrotal pressure at 1 cm of waters of the Art. conducts to Ved depression on 0,35 cm/sec. in a intratesticle artery and on 1,16 cm/sec. in an appendage artery). Thus, development of an ISH at an acute epididymitis causes specific disorders of a hemodynamic in an epididymis, consisting in change of an inflammatory vasodilation by a vasoconstriction, augmentation of peripheric vascular resistance. High resistance of vessels of an appendage aggravates expression of an inflammation and worsens the disease forecast. Existence of an ISH in combination with rising of a resistance of a vascular bed of an appendage at acute epididymitis dictates need of performance of decompression of a cavity of a scrotum, thereby defining indications to surgical treatment.