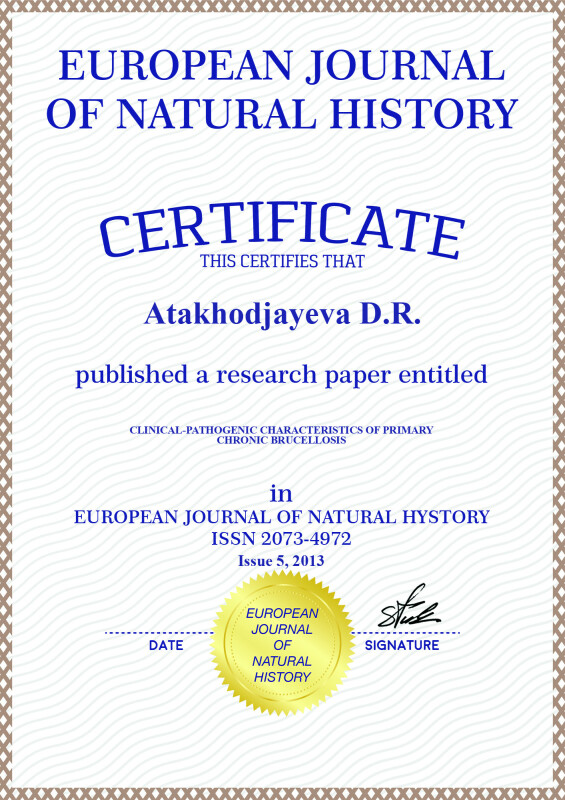 Article in PDF
277 KB
The study of clinical immunologic values of 35 patients proved that primary chronic brucellosis is characterized by long-lasting progress, average 7,5 ± 0,6 years, and moderate and minimal activity. The alterations in cell-mediated immunity have immediate impact on the appearance of disorders in cytokine section of immunity both on the side of pro-inflammatory interleukins and counter inflammatory interleukins in the form of reliable increase of interleukins IL-1β, IL-4, IL-6 and IL-10 with the background significant decrease of TNF-γ (1,7 times). For adequate evaluation of the status of patients with primary chronic brucellosis it is necessary to perform complex examination including not only traditional clinical methods but also the study of the values of immunologic status providing objective diagnosis of the disease.

Brucellosis is acute infectious disease which is registered more often in comparison with other very dangerous zoonotic infections and it is still actual problem for health care in many countries with developed livestock sector, including Uzbekistan [1, 4]. Brucellosis is characterized by complex pathogenesis, polymorphic clinical manifestations, wave-like recurrent progress, damage of reticular-endothelial system, focal symptoms in case of sub-acute form with often chronization of the process together with background developing secondary immune deficiency [2, 5].

In the modern diagnostics of brucellosis a great interest is paid not only to bacteriologic and serologic researches, but also to the study of immune pathogenesis [3]. Differently directed, complex and dynamically altering parameters of immune homeostasis of a patient with brucellosis determine the difficulties in the evaluation of occurring shifts in the immune system causing ambiguous estimations of the detected disorders and determine the progress and outcome of the disease. In domestic and foreign literature recently there are many works dedicated to the study of cell-mediated and humoral immunity and the state of non-specific resistance of organism [1].

In case of primary chronic brucellosis complex researches of profound study of the importance of cytokines for the development of pathologic process, interrelation of cytokines with clinical-immunologic manifestations, stage of the disease, severity of the progress and outcomes of the disease determine working out of new scientifically based methods of differentiated immune-correcting therapy for that disease.

In spite of a lot of researches dedicated to the questions of pathogenesis, diagnostics and treatment of brucellosis, researchers continue the search for the most effective methods of diagnostics, treatment and prognosis.

In relation to the aforesaid, the aim of the research is study of clinical-pathogenetic manifestations of primary chronic brucellosis taking into account immunologic values including cytokines.

Materials and methods of the research

The research was based on the examination data of 35 patients with primary chronic brucellosis from 18 to 70 years old living in the endemic regions of the Republic of Uzbekistan. Among the examined patients 68.6 % (24 persons) are men and 31.4 % (11 persons) are women.

The diagnosis was made on the basis of epidemiologic anamnesis, clinical symptoms and laboratory data.

The analysis of detailed blood immunogram was performed among 35 patients with primary chronic brucellosis (main group) and 33 actually healthy individuals (control group) according to the following scheme:

В. Definition of sub-populations of lymphocytes according to the common Boym method in ficoll-verggrafin density gradient (ρ = 1,077 g/l). Estimation was done on the basis of lymphocytes amount and the result was expressed in percents (relative value).

С. Definition of the concentration of immune globulins G, А, М in blood serum by means of radial immune diffusion method using mono specific serums of produced by Moscow Microbiology and Epidemiology Institute under the name of N.F. Gamaleii.

At the same time IL-1β, IL-4, IL-6, IL-10, TNF-γ researches were performed for evaluation of the state of immunologic system response to inflammatory process at the level of cytokines.

Difference of average values were considered to be reliable with significance level Р < 0,05. The existing regulations of statistical processing of the data of clinical and laboratory researches were followed.

In the analysis of the disease duration we detected that in case of primary chronic brucellosis the infectious process differs by longer duration, average 7,5 ± 0,6 years characterized by its moderate and minimal activity.

Patients with primary chronic brucellosis applied to local polyclinics and outpatients’ clinics for several times, but doctors failed to diagnose the patients and symptomatic treatment didn’t effectively improve the general state of patients.

At the reception to hospital in 45,7 % cases patients complained aching in the upper and lower limbs. Often there were total intoxication (weakness, headache) and sub-fibril temperature. Various changes in organs and systems were detected in objective examination. In the part of the organs of blood circulation there were registered tachycardia, bradicardia, dullness of tones of heart, hypotension, hypertension. Enlargement of lymphatic nodes, spleno and hepatomegalia.

In many cases there were damages in the organs of skeletal, nerve and sexual systems, such as arthritis, bursitis, spondiloarthritis, orchitis, orchoepididimitis; most often were sacroileitis, disorders of sleeping, sweating, disorders of menstrual cycle, miscarriages and pre-term deliveries.

The values of peripheral blood of the patients with primary chronic brucellosis were characterized by moderate decrease of erythrocytes number (28,2 %), decrease of ESR (26,9 %), leucopenia (92,8 %), neutropenia (95,1 %) with the shift to the left, lymphopenia, monocytopenia and
eosinophilia.

In the analysis of immunologic values of the patients with primary chronic brucellosis we detected the following changes depicted in the Fig. 1.

Fig. 1. The values of cell-mediated immunity of the patients with primary chronic brucellosis in comparison

As it is seen on the diagram there is misbalance of cell-mediated immunity, characterized by reliable rise of leukocytes and lymphocytes 1,3 times on the background of significant decrease of T-lymphocytes sub-populations (СD3+ – 2,5 times; СD4+ – 2 times; СD8+ – 1,5 times) in comparison with the control group values.

Alteration of B-lymphocytes level is proved by the values of its sub-population CD19+, CD23+ and CD25+ which are decreased in comparison with the control
values.

Besides that, we noted activation of natural killers, rise of that value 1,2 times in comparison with the control one is obviously determined by the increase of the number of immature forms of natural killers in peripheral blood.

Insignificant decrease of IgA and IgM on the background of reliable increase of IgG was noticed in the study of the values of humoral section of immunity.

In cytokines status of the given category of the patients there were also alterations presented in the Fig. 2.

Fig. 2. The values of cytokine status of the patients with primary chronic brucellosis in comparison

As it is seen on the given diagram there was reliable increase of interleukins IL-1β, IL-4, IL-6 and IL-10 in comparison with the control values. Especially high values are observed among counter inflammatory cytokines. Thus, IL-1β increase 2,4 times, IL-6 – 3,7 times. Besides that, there is activation of counter inflammatory cytokines IL-4 (1,9 times) and IL-10 (2,5 times).

At the same time with the achieved results decrease of TNF-γ concentration (1,7 times) was detected. It certainly effects phagocytosis system by means of decreasing its functional activity and preventing its provision of complete elimination of the agent in the
organism.

Thus, taking into account these results, it should be stated that at the present time for the adequate evaluation of the status of the patients with primary chronic brucellosis it is necessary to perform complex examination including not only traditional clinical methods but also study of the values of immunologic status, providing objective diagnosis and definition of the possibility of chronization and relapse of
the disease.

1. It was defined that infectious process in case of primary chronic brucellosis differed by its longer progress and was characterized by moderate and minimal activity.

2. In case of brucellosis significant disorders of cytokines regulation such as misbalance of pro (IL-1β, IL-6) and counter inflammatory cytokines (IL-4, IL-10) and γ-interferons are noted together with combined immune deficiency.