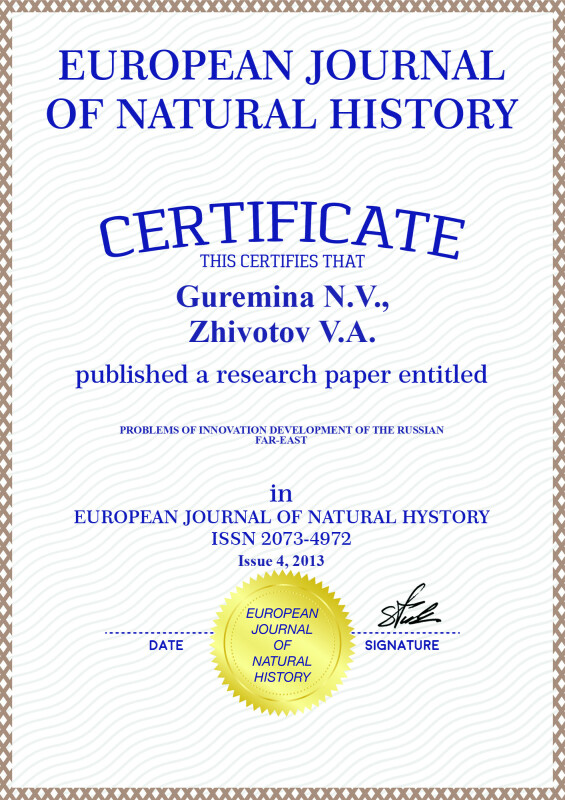 PROBLEMS OF INNOVATION DEVELOPMENT OF THE RUSSIAN FAR-EAST

The current tendencies in the global economy are important orienting point for formation of the regional policy in Russia. And in doing so consideration of the area factor for development of every region is an important condition of adequacy of the current changes to economic environment and to promotion of the effective territory development.

From these positions the organization in the Far East of innovation from the raw-material model, existing in the region for many years, to the model based on hi-tech industries is one the most important conditions for development of cooperation with the Asia-Pacific countries and precondition of effective use of the resources concentrated in Asia-Pacific Region for solution of internal economic tasks.

Nowadays the Far East of Russia belongs to the regions having extremely low impact on the development of modern technological processes and innovative structures. This lag is characterized by a number of factors.

Second, the Far-East projects don’t attract the interest of investments funds as well. According to the estimation of the Russian Private Equity and Venture Capital Association, out of the total sum of direct and venture investments, done by the specialized funds in Russia, in 2005 the Far-East Federal District received 1,1 %, in 2006 – 0,8 %. In terms of money these investments accounted for only several million dollars.

It is significant that this happens in the context of rapid growth of innovation-oriented investments in the economic vis-à-vis of Russia in the North-Eastern Asia. They were developing their innovative potential in this period by the accelerated pace. So the total venture capital investments in China (including Hong Kong), Japan and Republic of Korea in 2005 accounted for about 85 billion US dollars.

The existing vital differences in the innovative processes’ arrangement in the Far-East of Russia and in the countries of the North-Eastern Asia result in the catastrophic decline of the non-primary products’ export from the region. If in the beginning of the 1990s the share of machines, equipment and transport means, exported from the Far-East, was more than 34 %, then in 2006–2007 it didn’t exceed 3 %.

Much anxiety is caused not only by the current innovative processes in the region, but by their development in the foreseeable future. At the present time the requirements of the innovative activity development are to a small extent met in the program documents, governing prospective development of the Russian Far-East. Having backbone character for economic system of the region, the Federal Special-Purpose Program «Economic and Social Development of the Far-East and Trans-Baikal Area» has a clearly-marked infrastructural character. Allocation of the investments, envisaged by the document, shows that the system shifts in the structure of production in the region are not expected. For example, 58 % of the investments will be directed to the development of the transport complex (there are also plans for reconstruction of 22 airports and 13 seaports, construction and improvement of 6,5 thousand kilometers of roads), 23,3 % – for development of power-supply, 8 % – for housing and public utilities, 6,7 % – for social sphere. Development of innovative production is in fact not envisaged by the program. Sure, one can explain such setting of priorities by provision of necessary conditions for the next modernization of production system, but for this period of time the lag behind the neighboring countries will increase and, considering today’s rates of innovations implementation in Asia-Pacific economies, will probably become irreversible.

It is obvious that the required a fundamental changes in the government’s attitude to the hi-tech production formation, including information-communicational technologies, in the Far-East of Russia. Nowadays it is necessary to accelerate the processes of development and implementation of the programs, targeted to modernization of the regional economy. This approach is first of all conditioned by the full, legal and constructive consideration on the changes taking place in the economic systems of the Asia-Pacific. Underestimation of the current shifts can cause a negative impact on the Russia’s integration in the global markets, exploration of advantages of international specialization of labor for solution of tasks of prospective social and economic development.