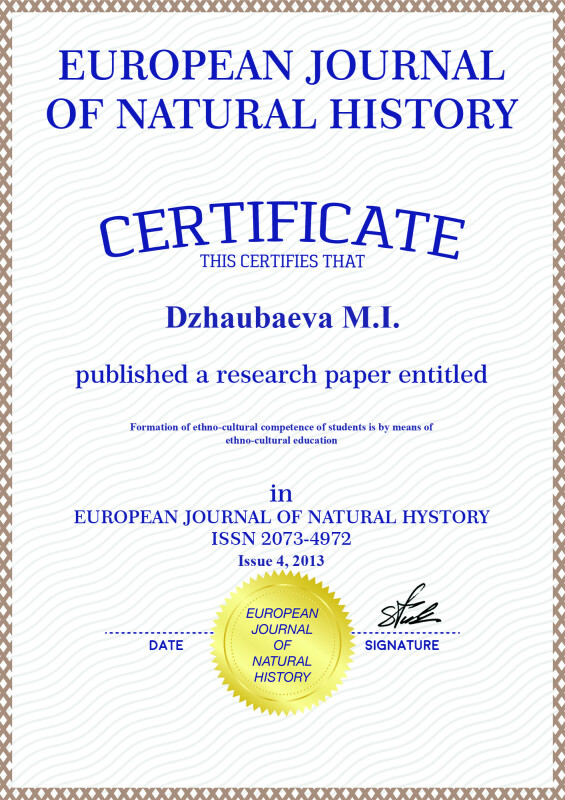 Article in PDF
190 KB
At the modern stage of Russian development life demands from education implementation of the social order of society and ethnoses occupying it to transfer to younger generation the richness of language and culture of their native people, tradition and spiritual and moral values, experience of life of the people, to enrich it with culture of the people of cohabitation and to attach to values of world culture.
ethno-cultural education
ociety
ethnoses
language
culture

There is a difficult and inconsistent process of mixing, interpenetration and an interlacing of cultures in the majority of modern poly-cultural regions that puts forward before teachers a problem of realization in society of the ethno-cultural education providing formation of ethno-cultural competence of students, formation knowledge at young generation and experience of cooperation with people of different nationalities, cultures and religions. To teach people to live together is one of the most important tasks of modern school, and it can be solved on the basis of the concept of ethno-cultural education.

Today ethno-cultural competence of youth is formed in the extremely adverse conditions. In multiethnic space of Russia ethno-cultural traditions, folklore works, language leave a life. Problems of knowledge and conception of ethno-culture face to each people. It is necessary to hold historical memory of all people with an account of cultural and historical features of these or those territories in multinational Russia.

The analysis of psychology-pedagogical and educational and methodical literature shows that the concept «ethno-cultural education» arises in the most various contexts and is understood differently by various researchers.

The ethnos is one of factor of socialization. There wasn’t conventional understanding of the nature, character and an ethnos structure. Some researchers take as a basis «objective data» is language, the territory, religion, a way of life, etc., others is behavior, the third is feeling of belonging to other group, the fourth is information communications. According to theoretical views of the Russian geographer and historian L.N. Gumilev, the ethnos is «the groups which arise, work, interact among themselves, and at last, die» [1].

S.I. Ojegov’s dictionary [2] treats the first part of a compound word «ethno-cultural» («ethnos») as «historically developed steady group of people is a tribe, a nationality, the nation». The second part of this term corresponds to broader and ambiguous concept «culture» (from Latin cultura is cultivation, education, development, honoring) which firstly appeared in an antiquity and it means «purposeful impact of the person on the nature and also education and training of the person».

Culture is difficult, interdisciplinary all-methodological concept, its characteristic, satisfying specialists of various branches of knowledge, is extremely difficult. There is no culture definition which could be considered exhaustive of the same mind. There are more than 500 definitions of culture that testifies about real complexity of the phenomenon nowdays, its inclusiveness in numerous social contexts, its universality …

Ethno-culture consists of two words «ethnos» that means «people», and culture (lat mean). It sets of the material and cultural wealth created by human society and characterizing a certain level of development of society.

We offer the following definition of the term «ethnoculture». The ethno-culture is a constellation of traditional values, the relations and the behavioral features embodied in material and spiritual activity of ethnos, developed in the past, developing in a historical sociodynamics and constantly enriching with ethnic specifics culture in various forms of activity self-realization of people.

Ethno-cultural range of problems is difficult and multicompound, many of its concepts are insufficiently developed in spite of the fact that at the beginning of the XXI century the sciences studying ethnic problems, actively develop. Complexity of its structure and internal communications causes emergence of a field of interdisciplinary researches and discussions in modern comprehension of ethno-culture.

The term «ethno-cultural competence» have appeared in science recently.

So in the «Education of Ethnotolerance of the Teenager in a Family» dictionary [3] the following definition is given: «Ethno-cultural competence is extent of manifestation by the identity of knowledge, skills and the abilities allowing to estimate specifics and conditions of interaction, relationship with representatives of other ethnic communities, to find adequate forms of cooperation with them for the purpose of maintenance of the atmosphere of a consent and mutual trust». V.A. Kortashev and V.Yu. Shtykareva’s definitions in this dictionary are aimed to cross-cultural interaction, the sense of the term comes nearer to the contents interethnic (multiethnic, cross-cultural) competence, in their interpretation determination of ethno-cultural competence has a sociological foreshortening.

There is the T. Poshtareva’s article which devoted the problems of formation at children of «ethno-cultural competence» in the «Pedagogy» magazine in which Poshtareva gives the following definition to this term: «Ethno-cultural competence is the property of the personality which is expressing available to set of objective representations and knowledge of this or that culture, being realized through abilities, skills and the models of behavior promoting effective interethnic mutual understanding and interaction» [4].

We offer the following determination of ethno-cultural competence. Ethno-cultural competence is the integrated property of the personality which is expressing in summation of representations, knowledge about native, and also about nonnative ethno-cultures, their place in world culture, taking experience by ethno-cultural values that is shown in abilities, skills, behavior models in the mono- ethnic and multiethnic environment. Essential difference of this definition is the culturological and ethnopedagogical approaches, an attention point on competence of area of native ethnoculture and on activity experience of mastering by ethno cultural values on the basis of what the civilized ethno-cultural consciousness deprived of nationalism and ethnocentrism, but possessing healthy feeling of self-esteem in harmony with feeling of ethno-tolerance is formed.

Working in the field of ethno-cultural education and formation of ethno-cultural competence of students revealed characteristic problems in pedagogical process. One of them is the absence of uniform understanding of the general terms scientists of dynamically developing interdisciplinary sciences. There is a need of clearing of terms framework even concerning the most common and root concepts.

The important problem which has the great importance in the course of formation of ethno-cultural competence is search of techniques and difficult for theoretical consideration.

One of the effective conditions of formation of ethno-cultural competence was also the ethnopedagogization of the educational process conducting to mastering by studying values of national and world culture. She assumes to use in educational process ways and methods of national pedagogy (folklore, traditions, customs, holidays, art, game, etc.), the accounting of national and psychological features of children and specifics of family education of various ethnoses.

Thus, we assume that one of effective conditions of a solution of the problem of formation of ethno-cultural competence of students is the etnopedagogization of teaching and educational process. Education with a support on national traditions of the people, its culture, national and ethnic ceremonialism, customs acts as a condition of realization of multiethnic education.