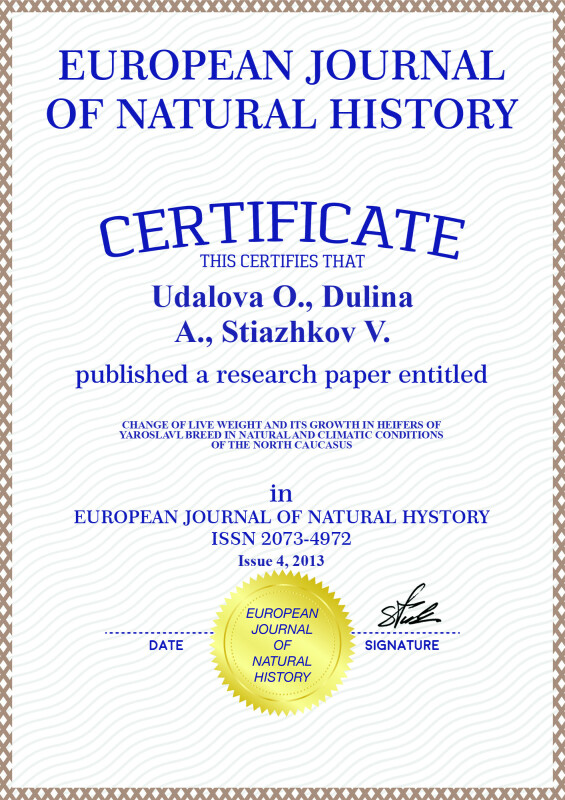 Article in PDF
230 KB
Researches of the changes of the live weight and average daily gain in heifers of Yaroslavl breed in the new for animals natural climatic conditions of the North Caucasus were conducted. The rate of the development of animals to a great extent is determined by the breed characteristics, conditions of their feeding and housing. The authors found out that the relative growth of rate reaches a maximum when an animal is 12 month old and it declines with age. Nevertheless the process of development of animal, the sequence and duration of the periods determined by heredity, also depend on external conditions, the change of which can speed up or slow down their passage.
breed
genotype
growth
development
live weight
gain

The choice of breeds and genotypes of cattle for a specific natural and economic zone is essential to effective livestock production. This problem should be solved on the basis of the fullest possible use of biological resources of animals in certain climatic and geographical conditions [2].

Nowadays a large number of cattle of Yaroslavl breed, not adapted to local climatic conditions, was brought to the south of Russia. They gave the offspring, which is planned to ranch and get livestock product [1, 3, 4].

The environment has an impact on health and viability of the farm animals, especially in the early postnatal ontogenesis. During this period key health indicators, the main functions of further economic use and possibility of a long-term industrial use are placed into young animals [5, 7, 8, 9].

Due to intense solar insolation, sharp continental climate and other natural and climatic factors of Stavropol physiological characteristics of animals are modified, new adaptive mechanisms needed for optimal life in these conditions are produced [6,10]. One of the objective indicators that let to get the most accurate description of the biological characteristics of different breeds is the evaluation of the growth and development of the Yaroslavl breed heifers. It was conducted by comparing the offspring of brought animals with a similar group of red steppe peers, which are well adapted to the conditions of Stavropol region and are widely spread in the North Caucasus region.

The study of the growth and development of the young animals is of great interest to determine the regularities of milk and meat productivity formation, and live weight and average daily gain are important indicators of the overall of the animals development.

We have studied the change in the live weight and average daily gain of test animals from the birth to 18 months (Table 1). Researches have shown that the live weight of calves at birth was similar with the red steppe one and with the Yaroslavl breed heifers, and it comprised 31,1 and 31,2 kg (Figure).

At the age of 6 months Yaroslavl animals were superior to the red steppe by 7,8 kg or 5,2 %. By 12 months the difference in the live weight between experimental groups of heifers was 12,2 kg, or 5.0 %.

At the age of 18 months the average live weight of the red steppe heifer was 348,6 kg and the Yaroslavl breed animals – 364,3 kg, the difference was 15,7 kg or 4,5 %. In all periods of the growth the difference in live weight between the experimental groups of heifers was reliable at P > 0,95. For the half year of the life the live weight gain of the control animals was 317,5 kg, and experienced ones – 331,1 kg.

Dynamics of the live weight of heifers red steppe and Yaroslavl breeds, kg

The absolute rates of growth of animals, primarily to the increase of its mass, are of great practical importance as they make it possible to compare actual data with planned production tasks for a certain period, and thus control their fulfillment. However in absolute terms we can’t say for sure about the intensity of growth processes in the body.

The relative growth of rate is determined multiply or in percentage terms to the initial or average value over the period. It testifies about the intensity of body growth for a specific time period.

The relative growth of rate over the period, expressed as fold increase in the initial rate, called the growth coefficient. This indicator is important to assess economic and biological characteristics of the animals and to judge the intensity of assimilation in the body.

For a more detailed judgment on the growth rate of heifers we have provided data showing the multiplicity of the weight gain of animals (Table 2).

The resulting coefficients indicate that the weight of Yaroslavl animals increased more rapidly than the red steppe.

The peculiarities of heifer’s development may be judged more accurately by the magnitude of the relative rate of the growth (Table 3).

The relative growth of rate of the experimental young animals, %

Under optimal conditions of the feeding and housing relative the growth of the rate of animals decreases with age, this trend is observed in our experiments.

Thus, the intensity of the animal development, to a greater extent, is determined by the breed characteristics and their conditions of feeding and housing. It was found that the relative growth rate reaches a maximum in 12 months and declines with age in animals of both groups. We have not been identified any significant differences on this indicator. Nevertheless the process of body development, the sequence and duration of the periods determined by heredity also depend on external conditions, the change of which can speed up or slow down their passage.