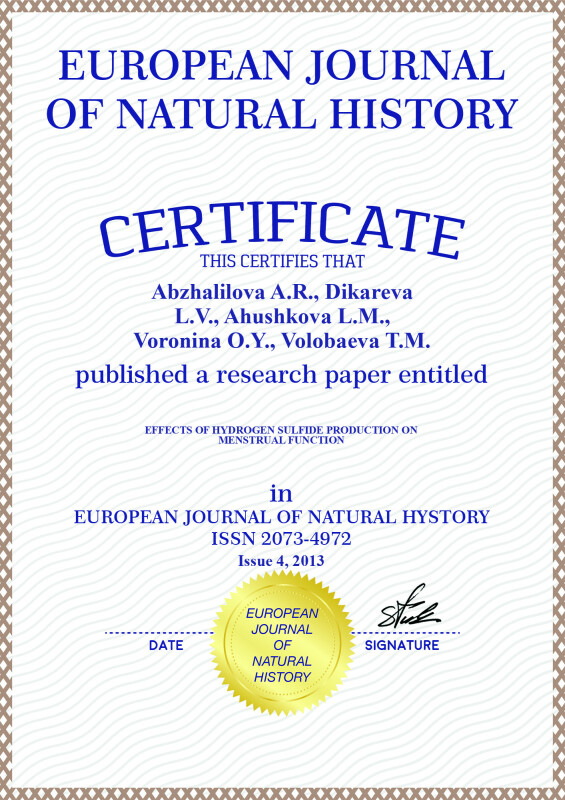 Environmental factors may have an adverse impact on women`s health. Many scientists, such as, A.K. Ailamazyan [1, 2, 3], N.G. Kosheleva et al [5], O.V. Sivochalova et al [7, 8] proved the negative impact of production factors and aggressive factors of the environment in cities with developed chemical industry on the reproductive system of women, proved their role in the growth of gynecological diseases, including menstrual dysfunction.

In 1986 in Astrakhan region there was opened the largest in Europe gas processing complex. Astrakhan gas is characterized by the composition of the aggressiveness and high toxicity. As a result of emergency situations the emissions of harmful substances have occurred in the atmosphere to high and extremely high concentrations.

In Astrakhan gas processing complex employs about two thousands women. They are affected by harmful substances almost during the whole shift (up to 85 %) of working hours. So the possibility of chronic exposure of toxic substance is very high.

A.I. Dobrinskaya studied pregnant women from the Astrakhan gas processing complex. She noted the high level of extragenital pathology and placental insufficiency. So, the neuro-endocrine and reproductive systems are developed in the hypoxia conditions. As a result of utrauterine lesions during adolescence there appear menstrual disorders, including juvenile uterine bleeding. In future these patients suffer both reproductive disorders and infertility [4].

In the Astrakhan State Medical Academy professor A.A. Nikolaev et al conducted research of inhibin A levels as an indicator of ovarian reserve in women working at Astrakhan gas processing complex. It was revealed that after 2,5 years of work the levels of inhibin A are reduced, that indicates a decrease in ovarian reserve. It leads to menstrual irregularities, such as anovulatory uterine bleeding, amenorrhea and infertility as a result [6].

Oxidative stress caused by Astrakhan hydrogen sulfide [9] has a negative effect on woman endocrine system and causes an imbalance of regulation ovulation factor.

It must be admitted that the effects of hydrogen sulfide production in Astrakhan region affects not only the employees, but also the people living in the vicinity.

So, women with high risk of exposure to hydrogen sulfide products must be followed up by gynecologist and have regular rehabilitation courses.

The work is submitted to the International Scientific Conference «Ecology industrial regions of Russia», England (London), 19–26 October 2013, came to the editorial office оn 18.07.2013.