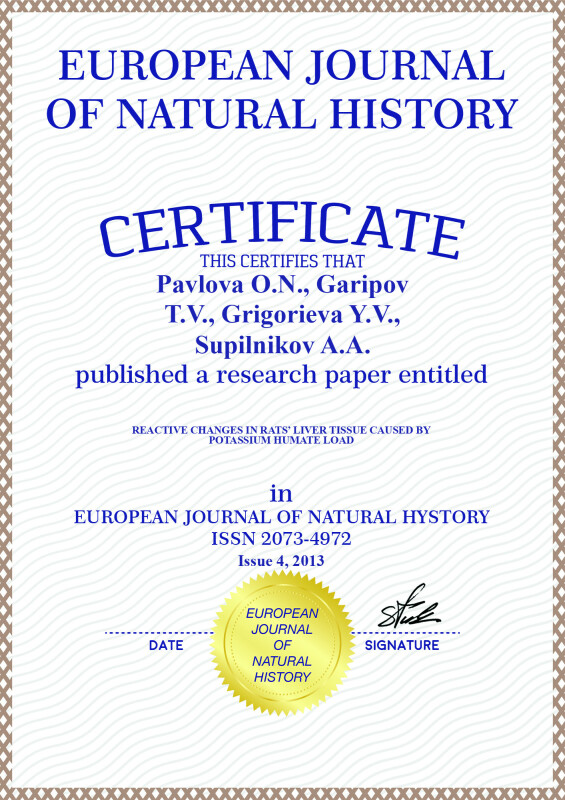 Complex therapy of the hepatobiliary system includes various groups of drugs, but hepatoprotectors hold a special role among them. They differ from each other in structure and mechanism of action, but all of them cause selective beneficial effect on the liver. Hepatoprotectors administration is focused on normalization of the hepatic metabolism and homeostasis in the liver, increase of hepatocytes resistance to pathogenic influences, stimulation of regenerative processes, recovery of the liver parenchyma, and normalization of its physiological functions. Despite the recent fundamental discoveries in the hepatology, many aspects of treatment and prevention of liver disease remain unexamined [4, 8].

For the most of the hepatoprotectors, the biochemical mechanism of immediate protective action is not absolutely clear yet, but it is known that their mechanism and pharmacodynamics are integral indicators that include membrane stabilizing, anti-toxic, anti-inflammatory, choleretic, antiviral, antioxidant, immunomodulating, blood ammonium decreasing, and other effects [2, 4, 8, 11].

Recent economic developments in the Russian Federation and introduction of new biotechnologies contribute to the drugs with the highest effectiveness and the lowest price to the patient and health services [2, 4, 11, 12].

Potassium humate, a humic acid salt, obtained from brown coal at the base of LLC «Emulsion Technology», Samara, meets these requirements.

Humates are organic compounds of complex physical and chemical structure widely distributed in nature and characterized by wide spectrum of biological activities. They are environmental and safe to use [1, 13, 14].

Humates are characterized by non-stereochemic composition, irregular structure, heterogeneity of structural elements and polymolecularity. The structural units of humic acids salts are aromatic condensed systems with side chains and heterocycles. The functional groups are carboxyl, carbonyl, phenolic, and alcoholic hydroxide, quinoid groups, methoxyls, amino- and amido groups, mono-, di-, and polysaccharides, peptides, up to twenty amino acids, vitamins, and minerals [1, 3, 5, 10].

Polymorphic structure leads to a variety of humic compounds positive effects, because if one molecule of the substance cannot participate in the chemical and physiological processes, then there will always be others suitable for such processes by size and properties [6, 7, 14].

Humates have multiple binding potential. Due to carboxyl, carbonyl, and aromatic fragments, these compounds can participate in ionic, donor-acceptor, and hydrophobic interactions. Thus, they are able to bind different classes of ecotoxicants forming complexes with metals and compounds with various classes of organics. Thus, they can be a kind of intermediaries softening toxins exposure on living organisms [1, 10, 11].

Despite the variability of the functional groups, all humic substances have a similar set of properties that allow them to act on the general mechanisms, the most important of which are: activation of nucleic and protein metabolism; intensification and normalization of cell’s energy balance; transport of electrons in the mitochondria electron transport chain; activation of oxidative phosphorylation, sorption capacity [5, 6, 7, 10, 13].

It was experimentally found that the humates can effectively intensify metabolic processes in living organisms. In vitro experiments on rats’ liver mitochondria have shown that their presence accelerates the oxidation-reduction processes, improves gas exchange, increases the rate of free radical oxidation, thus, leading to normalization of the homeostasis in «lipid peroxygenation-liver antioxidants» system [3, 5, 13, 14].

In relation to the above mentioned, the object of this study was to examine the reactive changes in rats’ liver tissue caused by potassium humate load as a potential hepatoprotective agent.

To achieve this goal, the following objectives had to be solved: to carry out histological analysis of the liver tissue during rats’ embryogenesis and ontogeny on the back of additional intragastrical load of potassium humate solution.

The material for histochemical analysis of liver tissue were the embryos at 15th and 21st days of embryogenesis obtained from the rats of control and the experimental groups, as well as liver of the reproductive rats received an additional intragastrical load of potassium humate solution 30 days before the pregnancy and delivery at a dose of 10 mg/100 g per body weight, 1 ml. Solution was prepared in distilled water [5, 9, 11].

The intact rats of similar developmental age were used as a control.

4–4,5-month rats were used in order to obtain females with dated gestational age. Males were placed to the females in the evening taking into account their estrous cycle, and in the morning the vaginal smears were sampled. Since rats coupling is usually take place at 1–2 am, the date of sperm detection in the smear was established as the first day of pregnancy.

Upon completion of the experiment, the animals were decapitated after an overnight fast, and liver was extracted. Liver of the adult rats and the embryos was fixed in 10 % buffered formalin, and then the histological material was processed using closed-loop apparatus for tissue processing Tissue-Tek ® Vip 5 junior. After that the samples were swamped into the paraffin blocks and used for section cutting thickened of 6–7 μm. The sections of liver tissue were stained with hematoxylin and eosin.

In addition, an immunohistochemical study of the liver was performed using a set of monoclonal antibodies to the apoptosis inhibitor (Bcl-2) and proliferation antigen (Ki-67). The typing was performed with DACO antibodies.

Experimental studies were carried out in accordance with the «Guide for the Care and Use of Laboratory Animals».

The light microscope «Mikromed» with ×40, ×100, ×200 and ×400 magnification power was used for photographic survey of liver tissue samples.

Samples imaging was performed by the light microscope «Mikromed» and digital camera [9].

Investigation of the liver tissue reaction after administration of potassium humate showed that, in general, organogeny during ontogeny and embryogenesis is not affected. On the 15th day of embryogenesis, the tubular structure of the liver is forming (fig. 1).

Lobulation of the liver is not developed, but hepatic tubules are better formed as compared to the liver of the control animals. In the formation of the hepatic tubules, more compact cells’ clump can be found on the periphery in the subcapsular zone, and in the center the cells are loosely distributed due to enlarged sinusoidal spaces deep insight the organ (fig. 2).

Sinusoidal capillaries have enlargements filled with differentiating erythrocytic cells, but in general, erythropoiesis is poor; as compared to the embryos obtained from the intact rats, only small amount of blood islands and isolated erythroblasts can be observed.

In general, at the 15th day of embryogenesis liver development in rats administered with an additional load of potassium humate solution did not differ from the control group except for poorer erythropoiesis and rapid formation of liver tubules.

By 21st day, tubular structure of the liver is completely formed (fig. 3). Enlarged perisinusoidal spaces are filled with erythro- and lymphopoiesis areas, but lymphopoiesis is more expressed than erythropoiesis.

The maximal concentration of hemopoietic cells is found closer to the central veins.

The hepatic lobules are small. The cells have «cobblestone» appearance, which is specific for hepatocytes without glycogen (Kraevsky cells). Portal tracts are poor developed (fig. 4).

In ontogeny (at 4-month age), the liver of the experimental rats have formed marked tubular structure and apparent portal tracts (fig. 5).

Poor proliferation of connective tissue cells in portal tracts is also can be observed (fig. 6).

Single small centers of infiltration consist of monocytes, isolate granulate leucocytes, and dominant lymphocytes are seen in the liver tissue of the animal from the experimental group.

In 4-month rats from the experimental group, the structure of the liver also has some characteristics not found in liver tissue of the control animals.

In the liver of the experimental rats, there are some hepatocytes with small-hydropic degeneration.

Also among parenchyma cells there are binucleated and multinucleated cells, cells with pyknotic nuclei, and small necrosis foci (fig. 7).

The following data presented on figures 12–15 were obtained during immunohistochemical study of 4-month rats’ liver with a set of monoclonal antibodies to the inhibitor of apoptosis (Bcl-2) and proliferation antigen (Ki-67).

Study of the receptors of apoptosis inhibitors revealed that antigen expression is observed in the centrolobular part of the liver lobule (fig. 8, 9).

Proliferation in the isolated hepatocytes is shown at a periphery of the liver lobules (fig. 10, 11).

Thus, the following conclusions can be made based on the study results:

1) long-term administration of potassium humate solution to the rats causes no pathological changes in fetal liver tissue and promotes accelerated formation of the liver tubules;

3) potassium humate causes no significant influence on proliferative activity of hepatocytes as shown by immunohistochemistry with monoclonal antibodies to proliferation antigen (Ki-67);

4) binucleated and multinucleated hepatocytes, especially in the central part of the liver lobules, should be considered as a sign of their enhanced functional activity, which may be due to inhibition of cells’ apoptosis as shown by immunohistochemistry with monoclonal antibodies to the apoptosis inhibitor (Bcl-2).

Fig. 8. Liver of the experimental rats at 4th month of ontogenesis. Immunohistochemical study of antibodies to apoptosis inhibitor Bcl-2. ×100 magnification power. Significant antigen expression is shown in the centrolobular part of the lobule

Fig. 9. Liver of the experimental rats at 4th month of ontogenesis. Immunohistochemical study of antibodies to apoptosis inhibitor Bcl-2. ×200 magnification power. Significant antigen expression is shown in the centrolobular part of the lobule

Thus, based on all above mentioned it can be concluded that potassium humate can stand as a hepatoprotective agent in the fetal development, since it promotes accelerated formation of liver tubules.

In the ontogenesis, potassium humate proves itself as an antioxidant through inhibiting of cellular apoptosis.

Fig. 10. Liver of the experimental rats at 4th month of ontogenesis. Immunohistochemical study of proliferation antigen Ki-67 expression. ×100 magnification power. Cells’ proliferation is observed at the periphery of the liver lobules in the isolated cells

Fig. 11. Liver of the experimental rats at 4th month of ontogenesis. Immunohistochemical study of proliferation antigen Ki-67 expression. ×200 magnification power. Cells’ proliferation is observed at the periphery of the liver lobules in the isolated cells