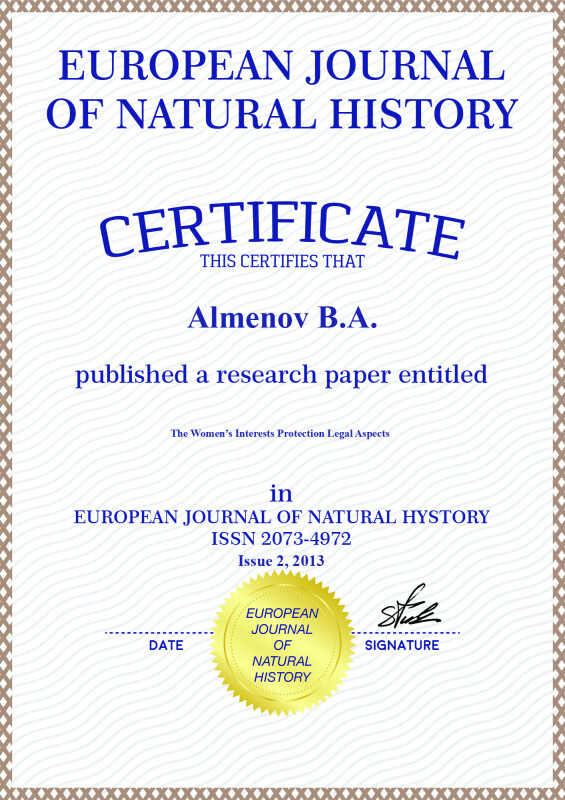 Almenov B.A. 1
1 The University after D.A. Kunaev, «The International Right»

The human rights’ respect and protection – this is the foundation, upon which the civil liberties and the state democracy are laid on. The human freedom, having guarantied by the State, is the prerequisite for the society’s economic and the social progress. Their rights and responsibilities knowledge, the ability to be used them, actively to be defended and to be protected them, the clear presentation on the human’s place in the state structure, the reciprocal rights and the responsibilities understanding of the State and the citizen, the ability to be used the existing state and the social mechanisms for their legitimate rights’ and the interests’ protection – that is currently included in the legal description of the human’s culture.

The human legal awareness is designed to be improved the human citizens’ and the officials’ competence, to be formed the new type of the human legal thinking, as the necessary condition of the human life and the vital activities under the modern reality conditions. So, there is such a principle – the rights, the liberties, and the obligations equality of the men and the women. However, quite often, especially in the marriage and in the family, and in the labor law, the woman is distinguished and separated into the special category by her position, which is and created her the possibility to be carried out that significant social function, to be realized that purpose, which is usually called by us the child’s birth, the feeding, the raising. Exactly, the quite understandable retreats are occurred, due to the human natural and the native inequality by sex.

The violence challenge against the women, there is a long way and in all the countries, having reflected the disharmony and the imbalances, that are existed in the relationships in the community. This challenge severity is quite indicated the unhealthy social and the moral atmosphere in the society. The discrimination against the women is not a thing of the past in the most of the equal countries in the world. So, the new social realities, having faced and survived by us, today, will be inevitably led to the changes in the society’s traditional structure, that is inevitably led to the changes in the society’s traditional structure, in the traditional thought’s, perception’s and behavior’s canon. Unfortunately, just as in our recent tolerant past, in the updated society, the deep relationship between the man and the woman is, in fact, the same, which is not equal, having taken the course on the democracy. So, the attitude is not gender equality in the society is secured with the sexual roles stereotypes, and it is rooted itself in the social structures.

Thus, now, the women are made up more than half of the world’s population, and they always have played the significant role in the human society’s development. So, the world is constantly changing, and, today, it is quite difficult to be indentified the country in the former Soviet space, which is not involved in the changes’ dynamics in the world.

So, the women’s battering challenge – is the social one: it is rooted in the gender stereotypes. The view has been instilled, since the childhood, that the woman – is the weaker sex, and she should be occupied the subordinate position, in relation to the man, who, as the punishment, has his right to beat her. The women, having subjected to the violence, and are abused, can always be got away from the abuser and the offender. In the modern society, it is believed, that the woman has her right to leave the house freely, when the violence has been become very serious. In fact, and, in reality, there are many obstacles, especially for the women in this way – it is the fears, the common properties and the others. So, once, having subjected the woman violence, and the abused woman – they are all and always victims [1]. But it is not so, having passed the advice and the consultation at the experts and the specialists, the woman can be returned to her normal life, if the violence cycle has been broken.

So, the men – are the offenders and the abusers, and they behave themselves aggressively and rudely in relations with all. In fact, the overwhelming majority of them are able to be controlled their behavior and they are understood, where and to whom, it is quite possible to be expressed the aggressive emotions.

So, the offenders and the abusers, having used the violence, all think, – that they are not mentally healthy. No, all these men are usually mentally healthy. These men’s social status can be at the high level, they can take up the leadership positions, to be active, to lead the social life, and to be successful in their business.

So, the men, having battered their wives, and also they beat their children. This is happened about in 1/3 families. Because, having got their own way, it should be settled down and be believed, that she and his children love him. However, there is not power much, and the violation cycle is being continued. The children are needed their father, even if he is aggressive. The woman is left because of the children, to whom she considers, are needed their father. The domestic quarrels, the manhandling, the assault and the battery, and also the physical abuse are not characteristic for the educated, and the poor people. So, in the families, with a higher level of their income and the education, such accidents are becoming less frequent. So, the woman violence is not practically restricted to the certain strata, the layers and the groups of the population. This is happened in all the social groups, regardless of the education and the income levels.

The violence against the women is distinguished by the different cyclicity and also by bу the gradual increase in the acts of the violence. This can be started simply from the criticism, having gone to the humiliation and the abasement, to the complete isolation, – and then by the slap in the face, by the kick, by the regular beatings, and sometimes – the outcome confusion.

So, the wife beating custom is as the old one, well as the marriage. In the most ancient times, the evidences of which had already been come down to us, the law was openly encouraged and also sanctioned the wife beating practices and the customs. But we always think and consider, that it had already been left in the past, when the morals and the manners were more violent and rude, and, moreover, the women were considered the men’s property. The woman violence and their abuse – is the very common and the widely – spread phenomenon in our time.

So, in many countries, the legal experts and the specialists, and also the lawyers, who have specialized in the women’s rights protection, consider that the domestic violence is occupied one of the first places among those types of the criminal nature, the necessary details of which are rarely reached the police and the law – reinforcement bodies and the authorities [2].

So, the domestic violence against the women – it is the quite old phenomenon. In some countries, the law is practically provided for the husband’s right to be use the force against his wife, if she acted contrary to his will, but, under the condition, that it will be not damaged to her health and not be killed her. Thus, there is such the law and in the religion.

So, the current society’s development stage is characterized by the severe crime situation, by the violence outbreak against the women. The violence study in the family has been shown, that there is the same situation in our families, which is quite typical for the families of all the other states. And the violence is practically arose from the wishing to be dominated others, in order to be achieved the dominant position, in explaining the domestic violence, and this negative phenomenon is associated with the man’s and the woman’s power and the status in their marriage, with the wishing to be preserved the patriarchal family life and the family structure.

So, the other factors are the poverty and the unemployment, the stress or the depression, due to the job loss. The violence impact against the women are expressed in the hematomas, the bruises, the wounds, and the fractures, moreover, some of the women had been suffered from the blows in the area of the head, with the half of the injuries was of the serious nature. The men crimes apex against the women, the murder is still remained. Meanwhile, the violence consequences are reflected, and they are affected upon the victim’s physical and the psychological health. Then, the women, having subjected the severe abuse and the ill – treatment, are frequently felt the fear sense, the depression, the physical illness and discomfort, which the alcohol and the drugs abuse risk is being increased, as well as the suicide committing risk.

Thus, the women, having subjected to the violence, – do not deserve it, at all. The women – this is, primarily, the mother, the selfless creature, that rocks the cradle of us all. She protects us from the ills of the life, the wear and tear of the life, the mother’s milk herself is given the nobility and the generosity into our soul, the striving to a better, and she is the loved one. We usually are taken all that is beautiful from the mother. «The Mother» – is practically one of the child’s first words. He is still the baby, the small one, and he is already in need of the mother’s constant proximity. He is not remained indifferent, when he sees especially her face, her smile, and hears her voice. It is bound at him all the best pleasant, with her looks. The close contact with the mother at the infancy time – is vital to the baby’s needs.

The men are taken everything the perfect from the mother, and what is given her in return?! The men must be taught to be respected to the women from the childhood, especially to his wife (e.g. she is the mother of your children), to be laid the great sense of the humanity in him, the ability to be lived among the people, but not only in his imagination. After all, the son, having become the adult man, must be the sensitive father, the good family man, and the respected, the beloved husband. So, it is necessary to be prepared the constantly growing man for the growing human life future, to be grown up in him the citizen with the inherent true character’s qualities, who could respond with the warmth and the attention.

Thus, the woman – is, the first and foremost, the mother, and, – then, it is her wisdom, her tenderness, and her love.