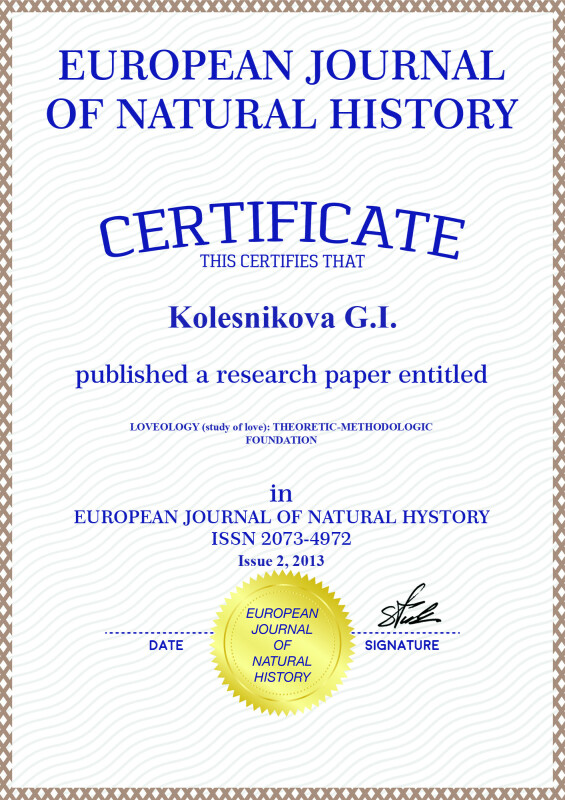 The article provides a theoretic-methodologic foundation of the necessity to create a study of love (loveology) in terms of classic philosophic traditions; the history of matter is studied; love is defined as a social-philosophic category; methodologic construct of study is provided. Particularly, the article points out the fact that a significant number of works have been devoted to the problem of love since antique to the modern times. The matter was studied in its different aspects: display of love as a social-cultural phenomenon; creation of classification of types of love; revelation its psychological basics. Therefore, we can conclude that the collected scientific material is a necessary and sufficient condition to outline loveology into a separate branch of science, as psychology, sociology, political study.

Urgency. A significance of philosophic comprehension of the category «love» in understanding the nature of human existence in its true spiritual sense during the process of conscious life does not cause any doubt, since trends of replacing the content of this idea with elements of pragmatism and utility become more widespread, and this fact provides for a moral degradation of society. From our point of view, it is no less important to outline the knowledge of love that has been collected during ages since the formation of the first philosophic ideas that have not yet been systematized and explained, into a separate branch of science.

Main Body. The thesis on creation of science as a consequent collection of scientific knowledge into the process of apprehension in a specific problem and separating it when critical mass is reached. Thus psychology was formed, as well as sociology, study of politics, etc. We think that the time for loveology has come.

Methodological construct of the research. Each true essence, according to G.V.F. Gegel, is the Real, das Wahre (real essence), in other words, the very existence, and love is not an exclusion in this case, it can be explained through a discussion (Logos). Besides, the category «love», as a logically-real idea that is explained through a social-philosophic discussion, has a triple, or, dialectic structure:

«a) an abstract or rational aspect (verständige);

These aspects can be presented in two dimensions, or as an independent system. Besides, the category «love» as a system includes such elements as subject, object, context field that has its social-cultural and subjective saturation, and in which the subject-object interaction takes place. As an element of social-cultural system it bears the axiological and regulative functions. However, it is not a process, but a condition that has its spiritual and psychophysical characteristics. However, reaching a state of love is a process that includes a number of stages that replace each other consequently during time. We thought that «types of love» that are outlines traditionally, are, in their essence, stages of reaching love, name and contents pf which depend on the selected classification. The most general variant of stages includes: passion/interest, falling in love, devotion, sharing existence.

As a condition, the category of love represents a subjective personal-selective attitude towards an object of love that functions at three interactive and interrelated levels: transcendent, social, biological. Transcendent level implies a unity with the world though perceiving love as an answer of the meaning of existence/purpose that lifts a man above ordinary reality and arise natural human feelings in him, thus outlining him not only from natural world, but social as well. Social level that consists of stereotypes, dictated norms, rules, and directions that are destructed by love. It creates a new, outer-social, spiritual level of interaction that exists beyond limits of material world. Biological level of interaction also exceed the limits of satisfying physiologic need for sex, so it starts to function at a new qualitative level, when unity of bodies becomes a prolongation, one of forms of interaction between souls. Besides, it is important to point out the fact that consideration of gender differences while selecting a partner is defined socially and culturally.

Love, as an attitude, as an expression of truly human feeling is, first of all, a spiritual unity, therefore, it is defined by a gender. And here lies a paradox: in order to mature spiritually for these relations, a person should absorb all wealth of social-cultural heritage, but, when he enters the next level that allows him to experience love, he must overcome social frames and reach metaphysical level of consciousness. Thus, we come to another side of the category of love – an action that is no less important, as love is an act. It is a spiritual action, aimed to overcome inner obstacles that we have already described, studying social level, and outer, social-physical action, aimed to protect an object of love as prioritizing it over one’s own egoism.

Resume. Love, as a social philosophic category, is a timeless metaphysical formation that has spiritual and psycho-physic characteristics and includes such elements as subject, object, context field, in which subject-objective interaction takes place. As a logically-real concept that is explained via social-philosophic discussion, it has two aspects: as an independent system that functions on three interactive and interrelated levels: transcendent, social, and biological, and also as an element of social-cultural system that bears axiological and regulative function. Being a timeless category, it includes subjective intimate-selective attitude towards an object of love and is expressed in two types of actions: outer (social-physical) and spiritual. Besides, in our opinion, the category of love cannot be a subject of classification, as it is a single timeless formation. However, the very formation/maturing of this feeling goes through a number of stages. The created classifications of types of love, in fact, represent their description. Love in its true meaning corresponds to a perfect (according to Stenberg), or divine (according to Platonov) type of love. In case formation of love stops at a certain stage, it is transformed into a different feeling within a maximum range, depending on a person’s inclinations: from positive (friendship, sympathy) to negative (hatred, rejection). The love itself that is represented as a qualitative formation, includes all components of its development stages, but is not a totality of them. We should also outline that stages of forming love, passion/interest, falling in love, devotion, are united by the fact that «the other one» is a mean of reaching one’s own satisfaction on the stage «sharing existence» – «me» and «the other one» act as equal, and only in case of love «the other one» is the priority in meaning «the one, for whom I do it».

Thus, as this article presents theoretic explanation of the importance of creating loveology as an independent scientific branch, we have carried out categorization of love, suggested a methodological construct, outlined stages of love formation. The article can be considered as a starting point of the study of love. In other words, we have sufficient foundation to state: the science loveology has started its existence.

The work is submitted to the International Scientific Conference «Present-day problems of science and education», Russia, (Moscow), February 26-28, 2013, came to the editorial office on 23.01.2013.