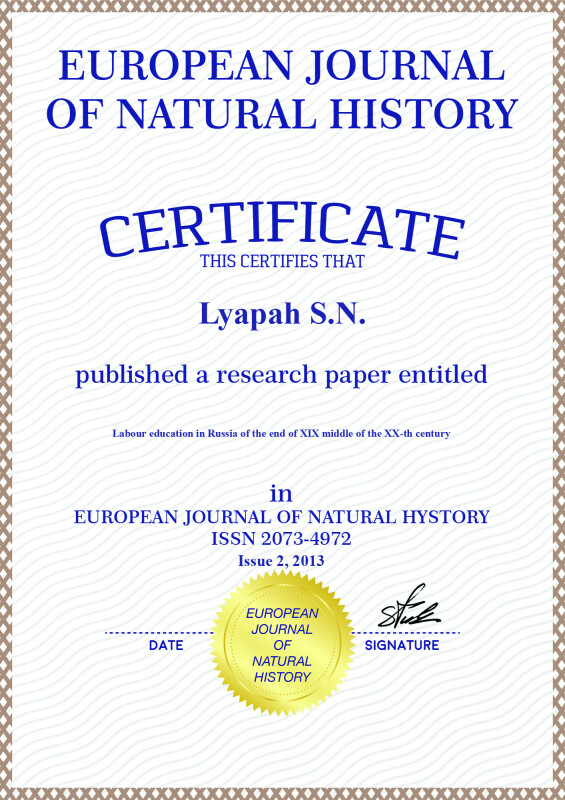 In Russia development of idea of labour education is connected with N.I. Novikov’s name(1744–1818). It published the magazine first in Russia «Children’s reading for heart and reason», propagandising necessity of education of love to work, goodwill and compassions to people since small years.

Most full and fundamentally idea of labour education in domestic pedagogics of second half XIX century has been considered by K.D.Ushinsky. In article «Work in its mental and educational value» K.D. Ushinsky considered work from philosophical, social, pedagogical, psychological positions, it put work on the first place, thus especially stipulating that the capital «is no more, as work creation» [8].

It defined work as «activity of the person free and concordant with Christian morals at which he dares by its unconditional necessity for achievement of this or that truly human purpose in life» [4].

Specifying in value of work for preparation of pupils for practical activities. Ushinsky has put forward absolutely correct position that education not only should inspire to the pupil respect and love to work: it should give still to it and a habit to work [5].

The given position was under construction on the basis of following elements:

1. Education should be national. It first of all means that it through widely developed school network should cover all rising generation of the people as compulsory education and form these generations in the spirit of economic, political and cultural and educational interests of the people; over education business the people should know, supervise.

2. Education should give to children real formation and at the same time develop their mental faculties so that this knowledge has been connected with life and directed for the public blessing. From here the major value and work as factor and as one of main principles of education.

3. The central place in formation of the person the native language as should occupy language of training and as a source of knowledge, as people treasury, as «the best never withering and eternally dismissed colour of all spiritual life».

4. Education should be got by the formation purpose высокоморального the person, the person for whom work is a point of honour and happiness, the person-patriot, with firm will and character, the fighter for good reason the native land, the people, for its happiness, for its progress.

5. The Woman education and formation on a level with the man as «the man and the woman – persons equal in rights, equally independent and equally responsible», – wrote Ushinsky should be provided.

6. Any loan and introduction in practice of education of overseas systems alien for the people and experience without critical processing according to spirit of idea of a nationality – is inadmissible [6].

Development of idea of labour education in pre-revolutionary Russia is connected with S.A. Levitin’s name.

Criticising traditional school for it «isolation from life, extreneity to children’s interests and children’s pleasures», S.A. Levitin gives of a word of one of founders of German labour school of G.Kershenshtejnera: «Our school is the island isolated from the whole world and from in full swing direct life on which our children are forwarded every day vigorous and cheerful, and whence come back tired and languid» [1]. In idea of creation of labour school as «future schools», S.A. Levitin allocates two aspects:

– The labour school as a general principle of the organisation of the national education, which essence consists in orientation of formation to inquiries of life, work, on requirement of workers (in other words, preparation for work is the leading purpose of formation);

– Labour school as a training and education method: construction of all teaching material on work and active amateur performance of schoolboys (in this aspect work acts as a tutorial and education).

Thus, the idea of labour education has received the greatest development during the Soviet period. The logic in definition of labour school as optimum form of education of youth is simple and convincing: at the heart of society life labour activity lies; hence, the school should be labour on the educational essence and social mission.

According to article the fourth point nine «the Law on the statement of the legislation of USSR and union republics on national education» one of main principles of national education in the USSR it – «communication of training and education of rising generation with life, with practice of communistic building, with socially useful, productive work; polytechnical, labour education and training» [3]. With a view of creation of effective realisation of problems on labour education of pupils the enterprises of the industry, building, transport, communication, service sphere were fixed to comprehensive schools, collective farms (with the consent of general meeting of collective farmers), state farms, timber enterprises, scientifically – research, project institutes, other enterprises and the organisations which along with comprehensive schools it is made responsible for the organisation of labour preparation of pupils as base. The huge contribution to development of the concept of labour education has brought Ampere-second. Макаренко. It had been described pedagogical working conditions as basic means of education: productive, collective and competitive character of work, a variety and complication of labour operations, an aesthetics and the scientific organisation of work, a rational mode of work and rest, a positive emotional background [2].

According to the concept offered by Makarenko, the Soviet school included not only general educational, and as labour and polytechnical. In it lessons of labour training and kinds of work of schoolboys were obligatory. Formation at school has polytechnical character: the knowledge of bases of modern manufacture, technics, economy is given.

Problems of labour education in the USSR dared in the course of general educational preparation, at manual training, in various kinds of work of schoolboys, including in summer works, in after-hour activity [7].

Indicators of labour good breeding were the requirement of the schoolboy for work, interest to work, labour activity, presence of knowledge of manufacture, labour abilities, readiness for a trade choice.

Representation about work as about the important factor of education remains and at modern Russian school though work of schoolboys and initial vocational training are unessential, and are recommended, if there are possibilities and demand. The domestic concept of labour education approaches with the western approach according to which initial labour preparation and vocational training are available for all. At city schools labour education has passed in vocational counselling. A vocational counselling result is the professional self-determination of pupils understood as a ready state of the graduate to a choice of a trade. Its indicators: presence of a professional choice, knowledge of the future trade and the requirements shown to the person, knowledge of the specific features, educational and practical work on a chosen speciality, presence of the general labour skills. The labour education which has undergone changes, remains today only on the basis of student’s production teams.

In the USSR educational process indissolubly contacted labour education which should prepare people for their future labour activity in its general sense, instead of to a concrete trade. Modern educational process is directed on reception of certain highly specialised skills which allow the graduate of school to continue training on in advance chosen speciality, at the same time, practically depriving of their possibility to change the choice.

Now in the country sharply there is a shortage question not lawyers and economists, namely experts in agriculture: tractor operators, machine operators, agriculturists. In this connection student’s production teams become on one step with professional orientation at city schools in which as labour student’s brigades and the labour associations of schoolboys directed for various economic works in nearby villages and on skilled platforms of institutes of agriculture began to be created.

The work is submitted to the International Scientific Conference «Actual problems of science and education», Cuba, March, 20-31, 2013, came to the editorial office 08.02.2013.