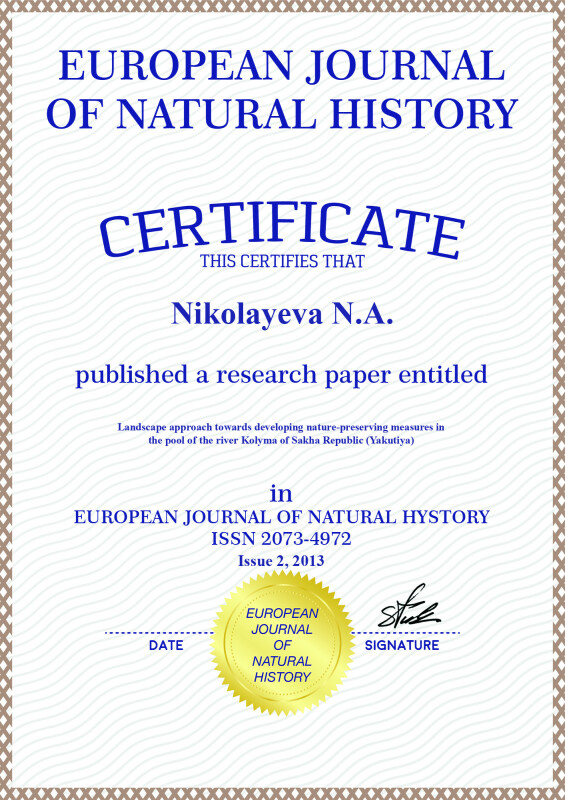 Nikolayeva N.A. 1
1 Institute of physical-technical problems of the North of the Siberian Branch of Russian academy of science,

Arctic territory of the Sakha Republic (Yakutiya) can be described by extremely severe natural-climate and complex economic conditions, remoteness from industrial centers, and low population density. Besides, a presence of rich natural resources defines the development of various branches of mining industry, energetics, transport, social infrastructure. However, low stability of arctic landscapes to anthropogenic strain even under an extensive type of economy can lead to ecologic problems.

In order to decrease negative impact of economic activity, it is reasonable to use landscape approach that provides for a solution of ecologic problems according to legislations of landscape alteration under an impact of anthropogenic factors. In this case a research, aimed to evaluate the degree of anthropogenic disturbance of landscape and their natural stability has been carries out at the territory of the pool of the river Kolyma. According to the results of this study, different levels of landscape-differentiated measures of preserving nature have been developed.

Evaluation of the degree of anthropogenic disturbance of landscapes of the river Kolyma pool was carried out via calculating territorial distribution of the structure of economic use of territory with altered parameters of different natural environment components. To do it, we have outlined the different types of territory usage in areas of Verkhnekolyskiy, Srednekolymskiy, Nizhnekolymsliy administrative districts. Those include: territories of industrial facilitation, transport, energetics, places of population, agricultural areas (deer and horse pastures); fells; areas of hunting and fur trade; unused territories. These areas have been combined into four types according to a degree of anthropogenic disturbance:

4) undisturbed – areas that are not impacted by economic activity, territories of open woods, swamps, tundras, etc.

Also, we have defined areas, occupied by them and their areal distribution. A degree of anthropogenic disturbance has been defined according to a volume of taking substances of basic components and expressed in percent share of the area of each type of economic usage to the whole area of the studied region [1].

Thus, defining a degree of disturbance of natural landscapes by anthropogenic activity has shown that a degree of economic acquisition of territory in the pool of the river Kolyma is generally low. This fact is explained by natural-economic conditions. Besides, local development of areas of industrial acquisition proves typical.

Estimation of stability has been carried out for nine landscape provinces of the pool of the river Kolyma that are outlined in our works [4, 5]. As natural complexes of the Far North are located in cryolythic zone and are occupied by tundra, mountain tundra, and North-taiga flora, cryosolic and bioclimatic indexes serve as the basics of evaluating stability of these landscapes.

Indexes of cryosolic conditions are: character of distribution of many-years frozen ground, average annual temperature of rock and volumetric iciness of rock. Indexes of bioclimatic conditions are: biological efficiency, warmth provision (sum of temperatures during a period with average stable temperatures higher than 10 °С), and index of dryness (degree of hydration). In order to describe the used landscapes in the pool of the river Kolyma we used indexes of cryosolic and bioclimatic conditions that are provided in works [5, 6, 7].

Estimation of stability has been carried out with the method of ranging in combination with the method of direct evaluation. For this, we have facilitated a scale, every interval of which was given a value (a point). 4 grades have been outlined according to a degree of a factor impact over a decrease in landscape stability: does not impact – 1 point; impacts weekly – 2 points; impacts significantly – 3 points; disturbs – 4 points. Integral effect of all components is estimated by a sum of points. The higher the total point is, the less stable we consider a natural complex.

Analysis of the received data allowed us to estimate a stability of natural complexes in the pool of the river Kolyma. Provinces that refer to subarctic and arctic tundras, mountain tundras, and forest tundras proved to be the most stable according to the sum of points: Alazee-Kolymskaya lake-thermokarst, Nizhnekolyskaya tundra, Kolymskaya lake-thermokarst, Northern-Anyuiskaya low-mountain, and Kondakovsko-Ulakhansiyskaya low mountain area. Mountain open woods and sub-bear mountain open woods provinces as Alazeysko-Ozhoginskaya highland, Yukagirskaya low-mountain, and Momskaya mid-mountain areas are weakly-stable, and Northern-taiga Ozhoginskaya low-mountain province that occupies the Southern territory of the river Kolyma pool, has a moderate level of stability against anthropogenic disturbances.

Solving a problem to decrease unfavourable consequences of anthropogenic strain, we need to ground on a system of nature-preserving measures. Various levels of nature-preserving measures have been suggested at the territory of the river Kolyma. These measures are specified in a set of direction and types, differentiated according to types of landscapes, degree of their anthropogenic disturbance and stability.

Thus, the basic type of using unstable tundra, mountain tundra, and forest-tundra landscapes is reindeer breeding and horse breeding, fishing and hunting-fur trade with a low level of anthropogenic disturbance. Nature-preserving measures should have the highest level, carry preventive character, and be directed to prevent degradation of soil-floral cover and preserve rock and soil in solid condition: these are norms of keeping strain over lichen pastures; limitation of free pasture; limitation and ordering movement of heavy track transport, maintaining rules of hunting and fishing; provision for migration of wild animals.

For low-stable mountain open woods and sub-bear mountain open woods with a primary development of hunting-fishing trades, presence of fells, burnt areas, and also using them as pastures weak and moderate levels of anthropogenic disturbance is typical. It defines a recommendation of high-level measures of nature preservation that include fire prevention, regulation of deer pasturing, maintaining optimal strain over pastures, norms and rules of hunting and fishing. A high significance belongs to measures of preserving vulnerable plants and undeveloped soil in relation to water protection, slope protection, and cryogenic protection functions of mountain territories.

Ozhoginskaya province that suffers from the greatest anthropogenic strain, refers to Northern-taiga landscapes. Here we can observe measures of prospecting coal with a pit method, a significant impact of Kolymskaya and Ust-Srednekanskaya hydro power station (Magadan region). Due to fragmental location of middle-taiga flora with fir-trees and pines, natural stability increases up to a moderate level. In this case an increased level of preserving nature that includes taking territories off from use and recultivation of areas that are involved in coal prospecting is required. Measures of protecting forests, water provision of flood plains, prohibiting woodcutting are also necessary.

Thus, landscape approach provides for a development of spatial-differentiative system of nature-preserving measures that are formed according to types of landscapes and level of anthropogenic disturbance. It corresponds to ecological requirements of optimizing use of nature in the Far North