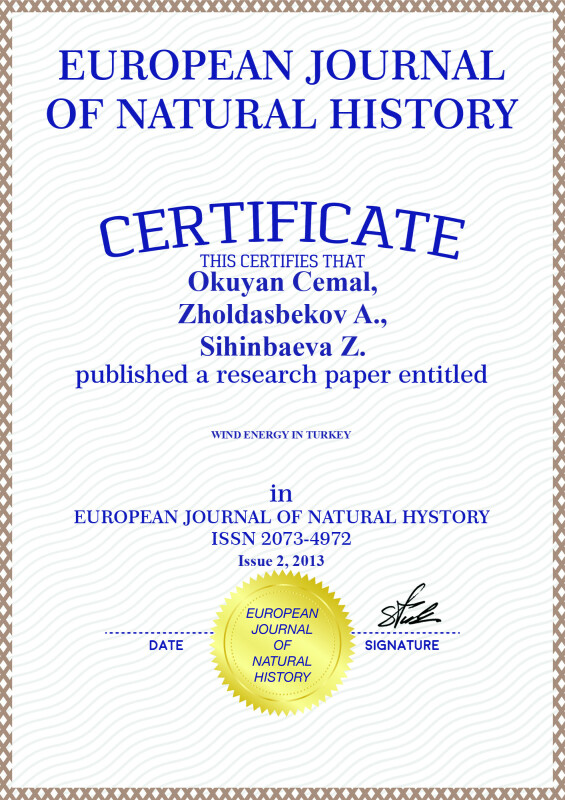 Increase in production, increasing expectations on the development of technology and comfort of mankind, has led to a rapid increase in energy consumption. The most useful type of energy «electrical energy» is. Therefore, the main goal is the production of electrical energy.

Has gained importance in recent years due to environmental awareness around the world, the energy generated seamless, reliable and cost-effective addition to being environmentally friendly becomes more important. This is revealed in many countries energy awareness. Thermal power plants pollute the environment, so renewable energy sources is very important. Wind, solar and biogas energy sources accordance with this definition.

Energy demand f all the countries in the world is increasing day by day. The criteria of the developed countries, energy has become synonymous with ownership. Heritage of millions of years of fossil fuels has decreased drastically. New oil, coal and natural gas resources are not available, the available resources are known to be depleted as soon as possible.

RES (renewable energy sources) are wind, solar and biogas energy, eco-friendly nature and quite due to the decrease in production costs per unit of energy has become widely used. Serious technological research is being done in many countries on the development of these technologies. With advances in composite materials and on the aerodynamics of the wing shows significant developments in wind energy. Low wind speed wind turbines have been developed that can produce more energy. Wind turbine for the selection of the initial investment costs are high, and the right place to invest one year after the measurement is required. Made on each side of the world, wind maps, geographic areas suitable for wind turbine are determined.

In this study, wind energy in the world and in Turkey were investigated.

Despite the revival of this sector in many countries, only a few countries producing small turbine offers special support policies. A few countries purchase guarantee. Especially in regions where access to electricity is very little support in developed countries. Only in China, the energy generated by a small wind turbine in rural areas, policies, supported by reasonable price a little bit. Small wind turbines, the energy market are a very low level. However, the market potential is very high. [1]

Offshore wind capacity continued to increase in 2010. Like previous years, the sea was built on wind farms in 12 countries. 10 of them in Europe, while the other 2 percent in Asia. Total capacity is 3117 MW. In 2010, 59 % of the new capacity is added.

As can be seen in the table below, Turkey is a country dependent on foreign energy. Provides nearly half of the energy from abroad, therefore, attaches importance to the local energy production. In 2001, the «Energy Market Regulatory Authority» established in the electricity, natural gas, oil and LPG market held by this committee.

According to projections made by the International Energy Agency, the world’s primary energy demand will increase by 40 % between 2007–2030. This, of 12 billion tons of oil equivalent (toe) by 2030, 16,8 billion TOE refers to the level exit. Important for Turkey’s energy security. Therefore, to evaluate the potential of new and renewable sources of energy, nuclear power plant investments made significant investments in energy efficiency and new energy technologies. That these laws have been enacted in order to plan. Electricity Market Law (2001), the Natural Gas Market Law (2001), the Petroleum Market Law (2003), LPG Market Law (2005), Renewable Energy Sources Act (2005), Geothermal Resources Act (2007).

Wind Atlas of Turkey is seen in the western regions is very advantageous for the wind. Therefore, the major part of the investment realized in this region. With the guarantee of the government purchase the energy produced by the wind turbine businesses selling. This warranty cents 5,5 for the first 10 years. Turkey, adequate incentives for entrepreneurs who want to invest in wind energy state [3].

Wind energy can be said in summary about the location of the present and future.

• Total installed capacity in China, became number one. (19 GW capacity expansion in a year with 50 % of the world market of new investments)

• Nuclear accident in Japan, and due to the oil spill in the Gulf of Mexico, has increased the importance of wind energy. Countries have been forced to evaluate wind energy policies accordingly.

The work is submitted to the International Scientific Conference «Present-day problems of science and education», Russia, (Moscow), February 26-28, 2013, came to the editorial office on 17.01.2013.