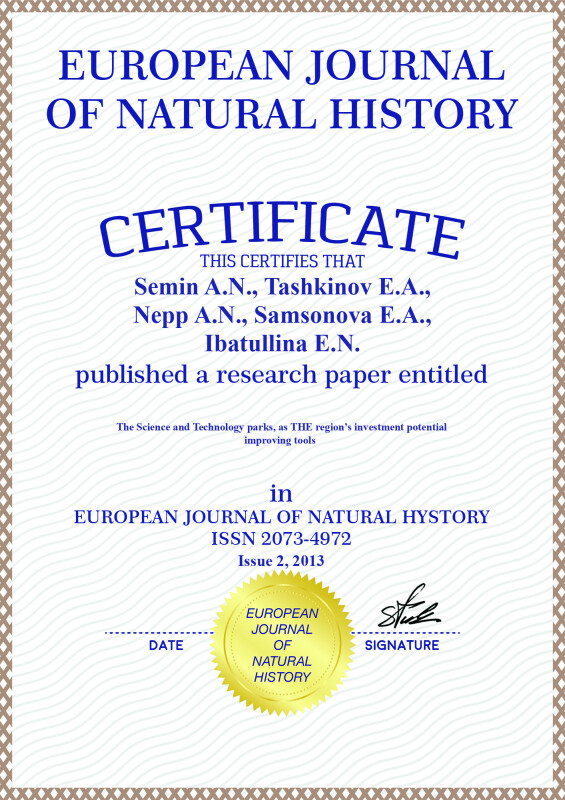 The Science and Technology parks, as THE region’s investment potential improving tools

The investment potential concept by the authors’ opinion on the Russia’s accession to WTO has been described in the paper. The countries’ and the regions’ competitive recovery, on the basis of the innovations, and the technology parks creation has also been described in the paper. The factors’ impact assessing on the region’s investment potential, by means of the correlation calculation has been revealed.

The innovations introduction in the Russian economy, as a whole, and in the country’s regions, in particular, will be facilitated the competitive recovery in the global arena, one way or another, having increased the investment attractiveness level, and the listed – above private investment potentials, which, in their turn, are quite able to be attracted so much – needed modern economy the means of the financing.

So, the investments attracting into the economy – this is the question of its survival, thus the investment attractiveness increasing – it is the additional funding, which will be allowed to be made the necessary step in the region’s further economic development. The investment attractiveness improvement will be allowed to be increased the rates of the economic growth, to be strengthened the region’s positions in the international arena, as well as to be improved the population’s welfare.

The economic, legal, political, social, and the other conditions, having created by the state to the all business entities and the management subjects, and also to the foreign investors for the profitable capital investments, for the purpose of the national economy further development are understood under the investment attractiveness [1].

So, the technology parks establishment is the significant tool to be improved the investment potential. The technology park, according to the opinion of Skopina E.V., – is the cooperation structure, having created on the basis of the Higher Educational Institution, for the purpose of its research and scientific capacity using, and the developed technologies commercialization, through the quite small innovative companies and enterprises creation and their development, having existed on the technology park territory [5].

Ivanitsky V.P. and Zubkov L.D. in «The Innovation Activity Infrastructural Support in the Strategic Importance Areas» paper have been called the innovation infrastructure, which the industry parks are included, the key and the significant factor of the Russian innovation system formation. Especially, such a system should be facilitated the country’s transition just from the export – resources to the innovative model of its further development [6].

So, the technology parks can be the effective form and the efficient way of the innovation processes organizing. This is completely confirmed by the long – term international experience. The technology parks have already been existed not only one decade years in India and China, Europe and the USA. So, it is simplified the innovation companies creation and its further growth, through the incubation processes and the new processes development companies from the already existing ones. So, the technology park, besides the highly – quality grounds and the space, is provided also the other services. Moreover, the Russian technology parks, in addition, the incubator functions carrying out, are also served, as a sort of the «security grounds», which are protected the enterprises and the companies from the aggressive environment [7].

T.S. Zhutovskaya considers the investment potential size of the investment resources, and the national economy state. On the one hand, this is the free capital investment into the economic entities and the management objects, as well as into the securities, for the purpose of either to be gained the income, or to be controlled the investee entity. On the other hand, – this is the promotion and the effective participation in the social and economic activities of the facilities and the national economy spheres [3].

According to the «Expert RA» rating agency opinion, having based the investment rating of the Russian regions, at the region’s investment potential assessment, it should be considered the main macroeconomic performance, the area saturation by the production factors, the consumer’s demand volume, and etc. So, this potential capability is the set of the eight private capacities:

– the raw materials – resourcely one (e.g. the average supply of the balance reserves of the main types of the natural resources);

– the labor one (e.g. the labor resources and their educational level);

– the production one (e.g. the combined effect of the population economic activity in the region);

– the institutional one (e.g. the development degree of the leading Institutions of the ME – market economy);

– the financial one (e.g. the amount of the tax base and the region’s enterprises and companies profitability);

– the consumer one (e.g. the region’s combined purchasing power of the population) [2].

At the first stage of the factors influence analysis, we will make the individual potentials assessment in the several regions, according to the «Expert RA» rating agency method. Next, it is quite necessary to be determined the amounts of the investments in the fixed assets, in the context of the considered regions.

The correlation is called the relationship between the two variables. So, this index may be accepted the number range from –1 to + 1. Then, the negative correlation – is the correlation, in which the further increase in one variable is associated with the further decrease in the other one. The positive correlation – is the relationship, in which the further increase in one variable is quite associated with the further increase in the other variable. If the correlation coefficient is equal to 0, the two variables are completely independent of each other. So, the correlation is being considered the strong one, if its ratio is above 0,60; if it is exceeded 0,90, than the correlation is being considered the very strong one. So, the private potentials research of the several separately taken individual regions and the relationship definition between them and the volumes of the investments, by means of correlation coefficient calculation will be helped to be drawn the certain conclusions. If there is the positive correlation between a high enough level, then it will be quite possible to be spoken on the fact, that such factors, as the volume of the mineral mining operations, the number of the economically active population, or the amount of the R & D expenditures are affected upon the region’s investment potential, and, therefore, upon the amount of the investments involvement, which is the significant tool in the accelerating rates of the economic growth of the regions and the country, as a whole.

In the course of the carried out research, we have already revealed the various authors’ views on the investment potential concept, the impact of the Russia’s accession to the World Trade Organization (WTO) on the country’s investment potential, and the factors, having affected it. Also, we have already proposed our approach for the potential determination, by means of the impact calculation through the correlation coefficient.

So, the importance and the significance of the investment potential definition of the region and the country, as a whole, are explained to the fact, that the investors, immediately before their money investing, carefully evaluate the potential investment objects.

The approach, having proposed by us, to the factors impact assessing on the investment potential will be enable to be made more versatile analysis of each individually separately taken region, and also to be identified the macroeconomic and the regional risks.

So, the examples of the existing technology parks in Russia (e.g. for example, «Skolkovo», or «The Titanium Valley») are clearly shown the volumes increase of the investments in the innovation. In their turn, the innovation introduction into the regions’ and the country’s economy, as a whole, will be permitted to be reached quite the new level of the further social and economic development.

The work is submitted to the International Scientific Conference «The introduction of new educational technologies and the principles of the educational process», Indonesia (Bali), December, 12-19, 2012, came to the editorial office оn 20.12.2012.