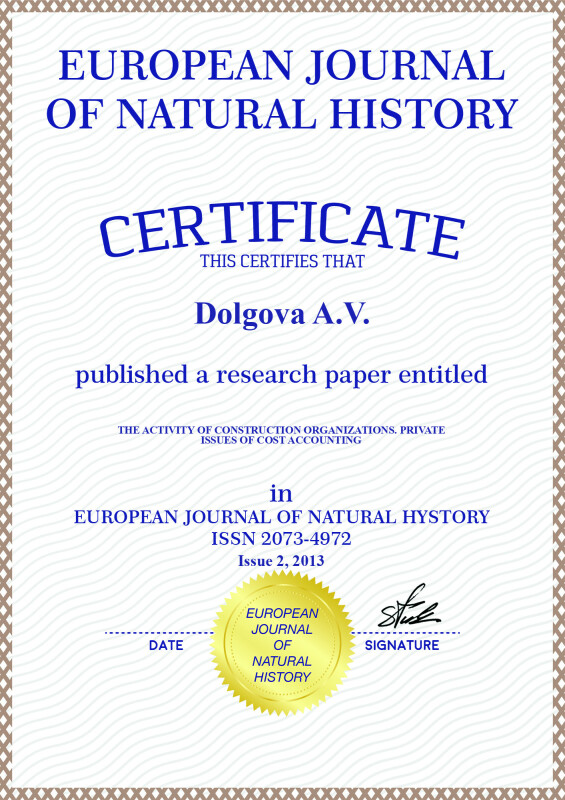 THE ACTIVITY OF CONSTRUCTION ORGANIZATIONS. PRIVATE ISSUES OF COST ACCOUNTING

The economic and financial stability of the construction, and the effectiveness of the functioning of the system of internal control is directly dependent on the legally correct fastening of contractual relations with the other participants of the process of building relations on the market.

The conditions of the modern economy of the contract must be regarded as one of the specific types of civil-legal relations. It is connected primarily with the fact that in the area of normative-legal regulation are the participants of the process of construction of various forms of ownership. If you refer to the statistical data provided in the report of the Federal service of state statistics of the Russian Federation, the volume of the produced construction works in Russia between January-November 2012 compared with the same period in 2011 increased by 2,1 % and amounted to 4 trillion 796,3 billion rubles.

In viewing the increasing volume of construction works it is necessary to search for ways to optimize economic relations, arising out of the contract for construction work that may be achieved through:

1) studying the specific features of the legal basis of the contract for construction work;

2) analyzing the functional orientation of such an agreement.

Still not completely eliminated gaps in existing legislation, including the ambiguity of the interpretation of existing standards and regulations, which form the basis of the practical difficulties in the application of legal norms aimed at settlement of mutual relations of economic entities-participants of the construction contracts, as well as indirectly complicates the organization of the system of accounting in construction.

For commercial organizations, methods of determination of cost of construction products on the territory of the Russian Federation has recommendatory character. Therefore, in the process of its activity the building organization often faces difficulties in cost accounting, which were not settled before the date of commencement of the work.

Firstly, in the course of construction, the contractor may find that the need arose for additional works which were not taken into account in the documentation, and such work is directly lead to an increase in the estimated object cost. Before the contractor is obliged to notify the customer about this, the customer must provide a reply to the message within the terms specified in the contract. If the contract does not contain the norm, then the answer is provided in ten days, unless otherwise stipulated by law. Article 73 of the Civil Code of the Russian Federation frees the customer from the reimbursement of additional expenses incurred by the contractor, if it is a proven fact that there is no need for such works, including their focus on prevention of destruction or damage of the object of construction. In this case the contractor will be deprived of the right of claim payment for additional work performed and will incur a loss in the form of downtime, if the response from the customer is received with infringement of terms of delivery.

Oftentimes, a company after the completion of construction may identify additional expenses. Decision of the question with «too late» expenditure was resolved only in November 2012, when the Ministry of Finance, in a letter dated 12 November 2011 № 03-03-10/126 recognized the legitimate nature of the inclusion of certain types of expenses in the structure of expenses after the Deposit of the fixed asset object into operation.

An important event of the year 2013 is the fact that the building holdings in this year for the first time published statements for the year 2012 in the form of the consolidated financial statements according to IFRS. This requirement enshrined article 8 of the Federal law on July 27, 2010. № 208-FZ «On consolidated financial reporting». At the same time the rest of the building organizations are not deprived of the right of application of international financial reporting standards.

The norms of international standards with every year, become more and more full-fledged elements of the accounting policies of the companies, not only construction, but also of other branches.

However, while there are some differences the norms of Accounting Regulation 2/2008 construction organization will be useable only on the condition that the contract for construction work falls on different calendar years, or has long-term character. There is no doubt the fact that the building organization in a time period can carry out work under several contracts, which have different temporal nature. IAS 11, in turn, allows you to use a unified approach to accounting for agreements with different duration. The problem of the account of expenses of future periods, are included in the General expenditures of the organization (for example, insurance of construction equipment, which in the construction organizations occupy a significant share in the structure of fixed assets) can be solved through the application of the Accounting Regulation /2008, which allows you to use the most suitable variant of accounting, and Accounting Regulation 9/99 does not set restrictions on the terms of beginning and end of work with the recognition of revenue from the performance of work, calculated on a long term, with the use of the method in the process of readiness.

In respect of construction contracts, which have short-term characters, the amount of flow, according to the current Russian legislation, the need to write off a lump sum, not to apply this provision, many construction companies prolong the contract for construction work, which were originally designed for a short term, for a period of more than a year to the possibility of application of the provisions of Accounting Regulation 2/2008. The current legislation does not contain a direct prohibition on the expansion of the scope of this standard, however, if such an opportunity would be provided initially, the organizations would not have to resort to the use of such schemes.

The desired change that can be made in Russian accounting is a change in the approach to the write-off of excessive costs, which the Russian accounting are recognized immediately in the composition of other expenses. International rules on the basis of the provisions of IAS 2 «Inventories» allow the organization costs of construction products attributed to the regulatory costs and include them in the cost, and the excess of the cost of materials and labour recognised as an expense in the period in which they occur. However, one cannot lose sight of the reservation in paragraph 2 in IAS 2, which says that the standard does not apply if the work in progress occurs under the construction contract. The cost of work in progress on construction contracts is regulated by the provisions of IAS 11, according to which expenses are written off in a special procedure, linked to the willingness of the object as a whole.

From the moment of entry of the new Federal law «On accounting» Accounting Regulations will be gradually withdrawn from use and in their place will be taken by the Federal accounting standards, which may be a Russian international standard.

The implementation of the recommendations of international standards allows to solve complex private matters relating to the Russian accounting. IFRS is not so rigidly regulating the actions of the accounting service, based on professional judgment. While their more stringent requirements are not directed at the process of documenting the economic activity, as to the scope and nature of the information provided in the financial statements today, we continue to go sure step to the construction of the accounting statements in accordance with international standards.

The work is submitted to the International Scientific Conference «Control of production and natural resources», Australia (Sydney), March 26 – April 6, 2013, came to the editorial office оn 13.02.2013.