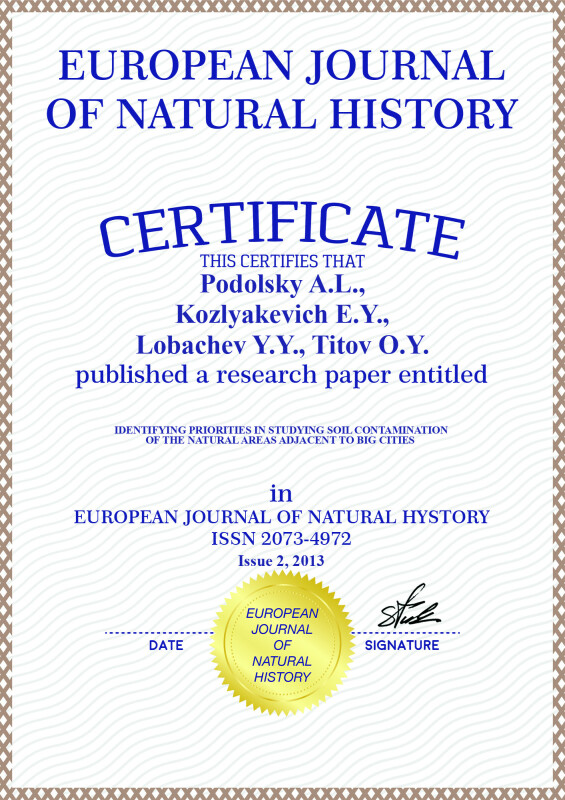 Protected natural areas near big cities act as popular recreational sites and source of fresh air for the city residents, and host substantial biodiversity. Contaminated soils may result in plants and fungi rich in pollutants causing health hazards to the city residents involved in picking up berries and mushrooms for consumption. Therefore, it is crucial to determine the environmental condition of soils in natural areas adjacent to the big cities. We identified the priorities to include studying heavy metal, nitrite, microbial and radioactive pollution of soils.

In 2012, we conducted a pilot study of soil pollution within the protected natural forested area «Kumysnaya Polyana» (KP), which covers 4417 ha of the Bald Mountain plateau adjacent to the city of Saratov. The goal of our research was to identify how the proximity to the city limits affected levels of forest soil contamination within KP. With this goal in mind, we grouped 134 forest-management sections of the KP area into three zones: adjacent (close proximity to the city), medium, and remote (farthest from the city boundaries). To ensure random sampling procedure in our study, all section numbers of each zone have been entered in the computer, and the computer program generating a series of random numbers selected eight sections in each of the three zones to be studied for soil contamination.

In the pilot study, we identified soil acidity and concentrations of the following pollutants: nitrates and nitrites of presumably anthropogenic origin along with the cations of ammonium and heavy metals (cadmium, lead and copper). For each sampled forest section, we collected five 200 cm3 soil samples at random locations, carefully mixed them, and then conducted quantitative chemical analyses based on standard techniques [1, 2, 3]. This procedure gave us the concentrations of each pollutant at each selected forest-management section. Then the results of analyses were averaged for each proximity zone. Statistical processing of the data included calculation of the standard error of the mean and one-way ANOVA analysis using the software package MINITAB [4]. The results are presented in the table.

While soil-pH did not vary significantly among the proximity zones, our study confirmed with high statistical confidence that the largest concentrations of all contaminants in the soil were found in the zone adjacent to the city while the lowest concentrations were detected in the remote zone. This finding supported our hypothesis that the pollutants came from anthropogenic sources, and the city of Saratov was the main source of pollution of adjacent territories including the protected natural forested area KP.

Unfortunately, proximity to the big city, besides bringing recreational benefits to the residents of the state capital, is a significant threat to the ecosystems of KP. The negative factors are both direct human influence (illegal logging, residential construction, forest fires, collecting rare plants, etc.) and indirect impact such as contamination of KP ecosystems by various man-made pollutants emitted into the environment by the city industry and transport.

While maximum allowable concentrations of analyzed pollutants in soils were not reached [5, 6], and some of the exact sources of established soil pollution would have been difficult to determine, the results of our pilot study suggested that, in spite of the long-term protected status of KP, environmental pollution of this natural area cannot be neglected. Since contaminants have ability for a long-term accumulation in an ecosystem, especially in soils, the latter can remain contaminated for decades even after the pollution sources stopped existing (for example, lead-containing gasoline was banned in Russia in 1998). Consequently, plants and edible mushrooms could become contaminated as well within natural areas adjacent to big cities. That is why our pilot study will be followed by a comprehensive research of soil pollution within the KP area.

The work is submitted to the International Scientific Conference «Actual problems of science and education», Cuba, March, 20–31, 2013, came to the editorial office 12.03.2013.