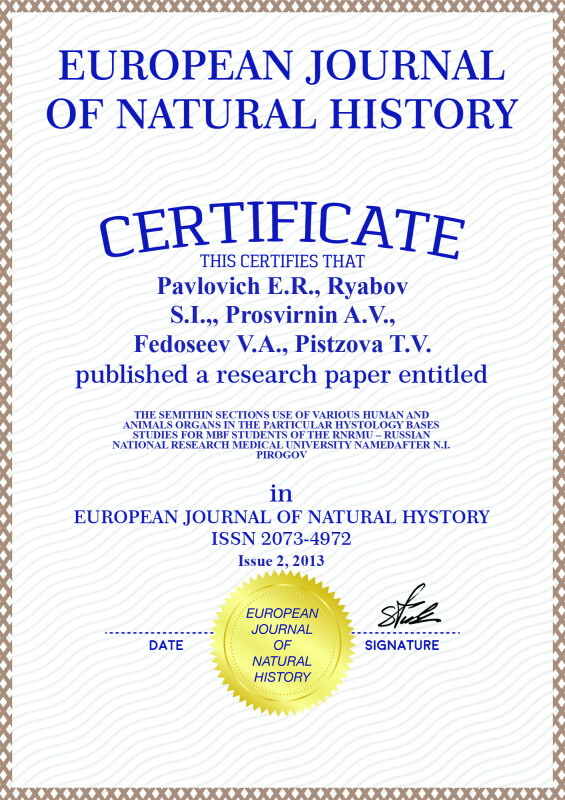 THE SEMITHIN SECTIONS USE OF VARIOUS HUMAN AND ANIMALS ORGANS IN THE PARTICULAR HYSTOLOGY BASES STUDIES FOR MBF STUDENTS OF THE RNRMU – RUSSIAN NATIONAL RESEARCH MEDICAL UNIVERSITY NAMEDAFTER N.I. PIROGOV

Available to the Morphology Chair MBF, the standard light–optical products for the histology, having characterized the various human and animals organs and tissues, not always of their good quality, because of their good thickness (e.g. Pavlovich, 2005–2008; Fedoseev, et. al., 2005, Pistzova, et. al, Pavlovich, et. al., 2008; 2009), which is not helped to be understood the peculiarities and their specific features structures by the students. So, the histological technologies and techniques use, combined with the new computer teaching methods use (e.g. Gurina et. al., 2009: Pavlovich, Prosvirnin, 2011) is offered hope to be improved the education, under the students’ employment time reducing conditions in the seminars and their lectures. The semithin sections production in the Chair has bee carried out by the traditional methods (e.g. Pavlovich, et al., 2011; 2012) with the organs, having contained in the epoxy resins, having stained them by the toluidine blue or the pyronin G. Then, the products digitization, and the panorama shots preparation has been followed. For all this, the obtained illustrations could have the quite different increase. So, the qualitative light optical illustrations producing and the wish to be shared with the world, have been inspired us to be created «The World–Histology» internet–resource [theYa.ru portal page in the Yandex system], on the basis of the semithin sections, which is improved the illustration material help by the students’ mastering to the quite various topics on the general and the particular histology of the human and the animals in the normal situation, in the pathology, and in the experiment. So, all the material from the various animal species and the humans has been split by us on the number of the albums: the epithelial, the connective, the muscle and the nerve tissues one; the cardiovascular, the urino–genital, the respiratory, the endocrine, the immune, and the hematopoietic systems, the gastrointestinal tract, the skin and its derivatives, and also «The Organ Systems Pathology», «The Cells and Tissues in the Experimental Exposures». In what follows, it is supposed to be created the albums: «The Organs and Tissues Age–Related Changes», «The Organs and Tissues Morphological–Comparatively Study at the Different Species of Mammals», «The Organs and Tissues Histochemistry», and also «The Cells’ Ultrastructure and the Organs and Tissues Extracellular Matrix». So, the students would be able to be self–studied the products, to be reported the challenges, to be posted the comments, and to be participated in the recitations on the topics. And it is quite possible, that especially this site will be of the interest not only to students, but to the specialists and the experts, who is able to be sent their photos, and the discussion, incomprehensible to the researches themselves to be described the products, which will be enhanced our understanding on the morphological diversity of the living systems.

The work is submitted to the International Scientific Conference «New technologies in education», Indonesia (Bali), February, 18-26, 2013, came to the editorial office оn 17.01.2013.