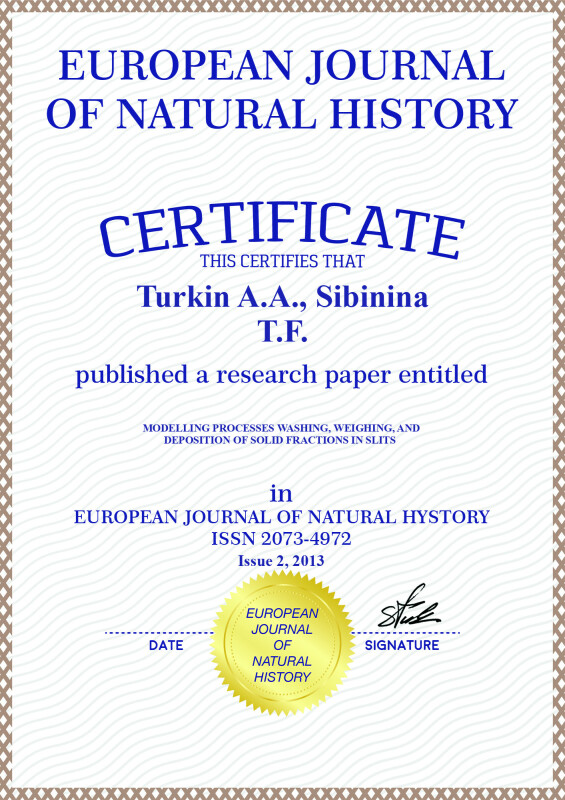 Behavior of solid fraction in water environment depends on their form (pebble, sand, silt) and dynamics of natural processes of sanding in slits. Washing, weighing, and deposition often takes place with usage of facilities that are designed for water-selection with a large hydrodynamic strike.

Studying these processes can be realized via carrying out several stages of theoretic analysis.

We examine dynamics of washing, weighing, or depositions fractions without considering their interactions. We select the following basic parameters:

– outer parameters (pressure, temperature, and density of an environment);

– initial parameters (initial concentration of fractions according to their types in areas of slit);

– output parameters (final concentration of fractions according to their types in areas of slit).

Using three linear parameters (length а, width b, and thickness с, а b с) of fractions (specifically, their average values according to the three outlined types of fractions) as inner parameters proves to be irrational as, first of all, it complicates the model, increasing its dimension (three parameters instead of one), and, secondary, it doesn’t define a form of fractions.

Therefore, in order to simplify the structure of formulas, we introduce a generalized parameter that links all three parts it. Using an arithmetical mean diameter does not prove effective as it doesn’t reflect forms of fractions:

Using average geometric diameter is more informative than (1) from this point of view:

A method to decrease sanding in slits.

In order to decrease sending of silts, we select a facility of water raise with a less dynamic characteristic, since a sharp change in speed of water flow to a slit causes washing and weighing of solid fractions.

Obviously, sizes of (1) and (2) equal only in case when fractions have a form of a ball or a cube that can’t be found in natural conditions. For the given values of а, b, с diameter

will be less in comparison to

, as a fraction form alter from the ball.

Below we provide even more informative parameter, compared to (2), that is equal to ball volume in diameter:

where V is a fraction volume.

We study an index that is equal to the area of round that if formed of a diametrical section that are formed of the average (width b) and the smallest (thickness с) size:

where Sds is the area of a fraction’s diametrical sector that is normal to its biggest size (length а).

Formula (4) is introduced in order to describe an equal size (diameter) of pebble and gravel. To use it, we carried out measurement of а, b, с, calculation of Sds, and calculation according to (4) that gave us the following results: gravel – deq = 0,5–1,5, pebble – deq = 1,6–2,5 mm. Pebble and gravel can move within the flow in a suspended condition, and description of this motion requires studying flow around a fraction. Therefore, geometry of sand fractions of this type should be described as equal to round (or a ball, according to (30)) in size that considers not only parameters, but also a form of fractions.

When studying sand fractions, we can consider so called sieve size that is the smallest size of a sieve cells, though which fractions have been sifted. Geometric characteristics of sand, slit, and clay fraction groups were defined via sieve analysis and definition of sieve size (for large-grain sands

мм). Starting with thin-grain sand fractions, it is necessary to use washing of fractions

Apart from reserves, fractions of pebble and sand must be also characterized by a coefficient of form. There are many suggestions and recommendations on defining this coefficient in bibliographic sources on studying various fractions (soil, seeds, grain, etc). Works of J. McKnown and J. Malaiky [1] suggest imaging all three sizes of a fraction as half-axis of ellipses: а1 = а/2; b1 = b/2; с1 = с/2, in which the corresponding projection is fit. Then, the coefficient of form will look as:

Its further development is expressed for coefficients [2] as:

The simplest formula of Cf1 (6) contains parameter а; actually, a length (the biggest size or an elongation) only directs a fraction in case it tears off, weighs, descends, deposits, while geometric sector of the smallest and an average parameters plays the key part in these processes.

When all the mentioned requirements of asymptotic behavior are secured, coefficient of form will correlate hydraulic fineness with size of fraction of different form. Our analysis has shown that this characteristic is secured by a coefficient, calculated with formula:

Indexes Cf1, and Cf2 provide an obviously increased coefficient of form. It is linked to the fact that for Kf4 dependence between fractions is considered linear, and for Kf1 – according to a square parabola. Their further study shows us that the degree of nonlinearity of hydraulic processes lies between (1) and (2). In (7) it equals 2α = 1,6, in other words, this dependence is described as parabola less than a square one that, obviously, corresponds to the physics of this phenomenon. Really, square parabola naturally considers only the area of diametric direction of a fraction sector flow, and parabola of a less degree considers a fraction’s volume as well. Studying these indexes, we can form equations of deposition and washing a separate part of spheric (Cf = 1) and non-spheric (Cf < 1) form.

We study the very totality of a fraction, when conditions for their motion are placed, flow structure and vertical transition of a fraction (lifting and descending) are formed, fractions are placed in a suspended condition, fraction flow is in turbulence.

Descriptions of fractions are usually based on an assumption that they are formed occasionally, and each size of fraction can be given a provision (weight coefficient). While breaking fractions into definite intervals, for example, via sieving analysis, one can come up with a curve of granulometric composition. This curve is constructed on discreet value of sieving sizes. Besides, there is always a certain function in its form, as we are studying an interval of fraction size. After that we calculate a density and connectivity of fraction flow, speed of free even drop of fractions in a still liquid (water).

Considering these indexes, we have formed equations of deposition and washing of a flow of non-linked fractions of spheric (Cf = 1) and non-spheric (Cf < 1) form.

Description of fractions’ motion in a flow with a suspended condition and constructing diffusion models of dynamics of fraction mixtures with an account of boundary conditions (concentration of suspension at a lower border).

For a stationary case (when concentration of fractions C and coefficient of diffusion Cd do not alter) we have an equation of Frankle type:

where ω is hydraulic size; z is vertical coordinate.

Equation (8) should be supplemented with border conditions at the border z = 0, С(0) = С0. In this case its particular solution in terms of constant equality of a substance quality that moves up and down looks as:

Defining functions С0 and Cd according to (9), we calculate profile of a substance concentration.

Description of a silt’s condition from the point of sanding according to rheological model is represented by integral differential equations of Fredgolm and Volter type of the second order and development of model of identifying cores of creeping and relaxation for a specific silt.

The work is submitted to the International Scientific Conference «Control of production and natural resources», Australia (Sydney), March 26 –April 6, 2013, came to the editorial office оn 28.01.2013.