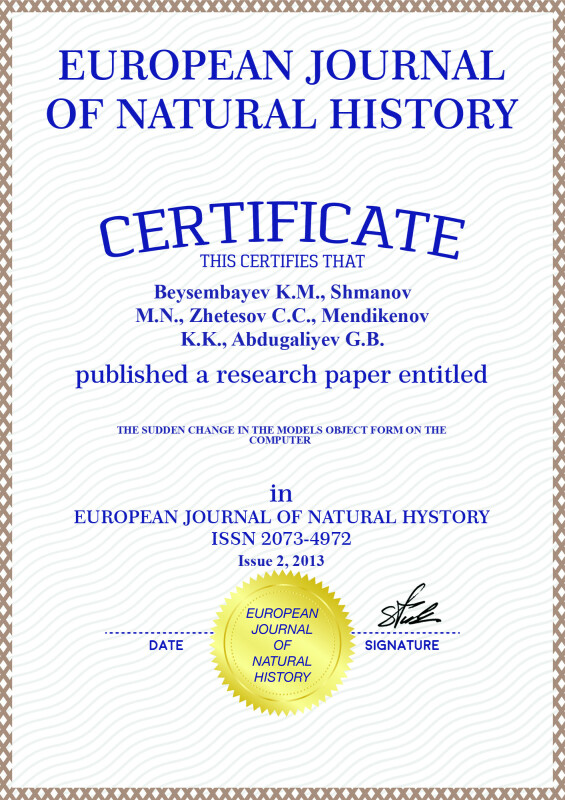 THE SUDDEN CHANGE IN THE MODELS OBJECT FORM ON THE COMPUTER

The modern technologies of the computer simulation are become the independent of the theoretical methods, having justified the decision. The main reasons for this are the numerical methods development with the high speed computing. Moreover, the users are often used by the ready – made special programs and by their application instructions, which is kept the solution away from the deep theoretical justification. All these reasons have already been led to the main errors in the final results. Particularly, it has been taken its place in the applied researches [1, 2], which are often used the calculators from the special applications, for example, such as the finite elements method (FEM). The free mesh construction is used in some areas, without the proper control calculations precision at the FEM meshes constructing for the complex structural constructions for the easy solutions, along with the manager mode. The grids may be varied slightly, but even for the symmetrical models on the symmetry axis’s both sides, which is caused the quite significant deviations of the fractures’ calculated directions. The challenges with the calculations accuracy are usually possible in the stress concentrations areas, not only in the complex circuits, but in the special zones, having had the profound impact on the constructions state. So, the emergence causes of these zones have not been precisely defined yet, and it is hard to be measured the errors in the calculations. But they can be the causes of the structures’ catastrophic destruction, (remember the Transvaal Park disaster in Russia, a number of the accidents in Germany and Poland in the early 2000-es) [3]. Thus, their causes have not been identified, or they have been defined presumably. So, there is the interesting case in Volgograd (Russia): the deformation waves formation of the bridge across the Volga River. So, the main reasons for the construction’s incorrect calculation, due to the resolvent, have had occurred just in many complex constructions, but, here, we have the factors, which are fundamentally not entered into the existing regulations and the calculating methods, the existing rules and the formulas. In our opinion, they are taken their place, due to the sudden change in the whole system form.

Usually, the calculation methods are provided for the deformation consideration of the structure’s separate section. But, here, it is talked on the entire construction’s deformation, when it is changed its whole surface, and throughout the entire its volume. For example, in the theory – it is quite known for the bars stability, according to Euler, when the rod bending, in the form of the sine, is suddenly changed the form, and the convexities are also changed into the cavities. From the practice and the experience – it is quite known, and for the thin – walled structures, when they are changed their form, under the temperature influence, that it is accompanied by the sound effects. So, the phenomena are always accompanied by the system’s oscillations. But, this has more to be done with the thin structures or the fine ones of its separate and the individual nodes (e.g. the bridge in Volgograd). So, it visually is seen the deformations with great difficulty for the thick structures, because of their values are made up the hundredth fractions of its size. The form change, in accordance with the physical presentation, is explained by the system’s energy state transition to another, when the former one is already «not beneficial». So, at this moment of tension, in some elements structural elements are increased non – linearly, and, moreover, their growth is caused the form change, and, if the design is the thin – walled one, then the system’s clear auto–oscillations are emerged.

For this phenomenon fixation, we always have the acoustic radiation, which is quickly decayed for the thick – walled structure. If there is the calculating design methodology for the stresses and the deformations, than the first requirement to it – it will have, from step to step, to be fixed the system’s ongoing destructions (e.g. they can be of the different types). Then, they are taken into account under the challenge’s boundary conditions, and they are expected the next step. Usually, at the stage’s beginning, the stresses are changed not much, and their sharp growth (e.g. here, the improved the calculation’s accuracy is also required) is indicated the bifurcation’s beginning, or more precisely, rather the system’s state multiple meanings [2, 3, 4]. So, the statistic solutions are not allowed efficiently to be fixed and to be captured the system’s vibrations, but, at the defined improvement, they are fixed the cyclic changes in the system, when it is repeated its state, having caused the software program’s looping.

It should be extremely simplified and used its complex solutions, in order to be created such a special program, where the model’s many new elements are introduced. For example, at the system’s considering of the underground long wall coal mining development, at first, the layer with the overhanging over it, first, by two, and, then, by three consoles of the rocks has been considered. So, the simplified finite elements have already been introduced between the consoles and the layer formation. The layer formation integration had been introduced, having researched the layer’s and the consoles’ formation and behavior specific features and their peculiarities, that was allowed us to be estimated the main reservoir’s characteristics of the layers’ formation loading zones. The consoles had not been had the corresponding grid to speed up the necessary calculation, and they were described by the equations of the elasticity theory. As a result, the deformation form changing, the wave nature of the load distribution, especially, the specific features and the peculiarities of the layers’ delaminated sections areas, their order in the layers formation, the deformation and the precipitation formation at the sections layers during the disintegration have easily been tracked and monitored.

It should be considered not only some elements’ destruction of the system (e.g. the cross fracture, the delamination), in order to be, more precisely and accurately, described the constantly changing system, but also their mobility increase, due to the varying loads. Therefore, the «elements’ change forming» term is used, sometimes instead of the «destruction» term, which should not be confused with the system’s change forming. It was not quite enough the computer model for the precise and accurate assessment of the system’s state change, and we have already used the very simple scale – tested model from the photo–elastic material, that made it possible the experiment’s quality to be tracked and monitored.

Then, the tightening weight in the computer model, having simulated the overlying rocks, has been replaced by the half plane (e.g. the rocks imitation up to the ground surface) with the corresponding half plane and the overhead console interaction equations. Thus, having had the relatively small program code and, therefore, correspondingly, the good possibilities of the programming errors and the challenge’s logic solving well – placed control, we have got the chance to be concentrated on the form changes fixation program (e.g. the destructions) of the various types, when we had to be compared the damages’ types and, moreover, to be found the universal estimate for the high – priority selection of one of them for each calculating cycle [5], and also the special automatic correct program for the form change and the calculation continuation just in the new state, having dropped the given report into the data files.

So, the stress non – linear increase fixation is taken its place only, when the system is collected the elements’ form changes of the minimum level and is became relatively free (e.g. it is quite impossible to be prevented such violations, due to the need of the management enormous efforts), and the prevention attempts are trying to be avoided the fact, that if they are occurred in the other areas. Then, the stresses are reduced, and the system, as it is sought to be repeated the previous state, although at the new level. So, the areas, where there have been the discontinuities, are closed up again, which is repeated several times. Since, the statistic solution is practically allowed to be simulated the system tendency to the oscillations. We will note, that the logic challenges loss should not be occurred in the computer applied researches, and, moreover, the form changes in some areas of the destruction will have to be securely fixed, recorded and explained. So, the phenomenon process model should be constructed, having reflected «the common sense» [5], and the mixed and the ambiguous results to be explained by the known physical principles and the analogies, so the fixed some delaminations could be explained by the stresses wave spreading, having obtained firstly in the simplified, and then, in the solid – state model, and, finally, in the fixed state under the mining conditions.

Thus, the mechanic principles are practically allowed us to be extended the geo-mechanical system behavior and for the other ones, for example, the construction systems, which still is not taken into account at the designing.

The work is submitted to the International Scientific Conference «Computer simulations in science and technology», Andorra, March, 9-16, 2013, came to the editorial office оn 20.02.2013.