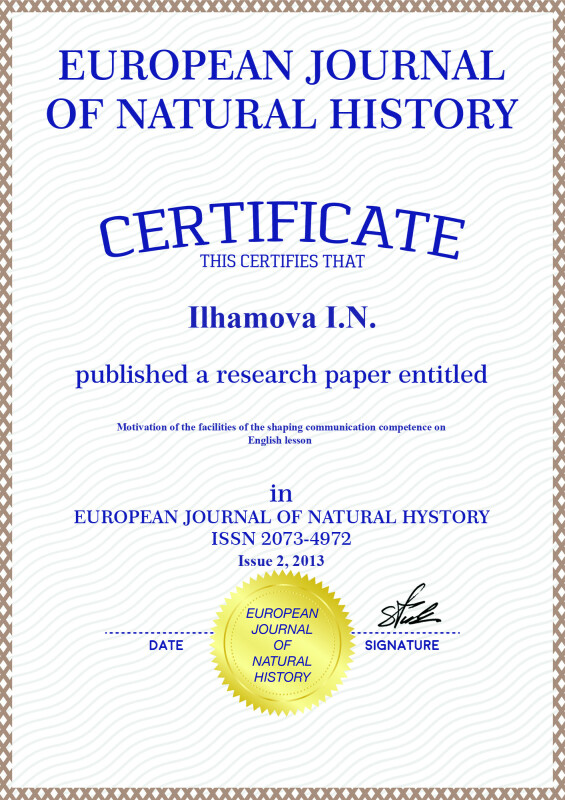 The Modern condition of the theory of learning the foreign language and gained knowledge makes it more necessary to return to competencies of the communication education.

Regrettably, it can’t be said that all regularities are already known and formed, allowing train speech activity effectively, but the only thing that possibly can be confirmed with confidence is that the base of the methodical contents of the modern lesson must be communicativeness. Before speaking about the problem of the shaping communication of competence, it’s very important to analyze the determinations, communication data in psycho-pedagogical literature, and reveal its essence.

1) behaviorism (the base to communications is direct speech signals, manipulating those possibly develop a person; the representative of this approach is D. Uotson);

2) symbolical interactionism (personalism), where communication is internal metaphysical ability of a person to open in himself the feeling of others (Dzh. Mid).

A.B. Dobrovich selects four main phases in process of the realization to communications:

2) revision to situations of the action;

In history of the education foreign language two main ways were practically checked:

a) study language on base of the rule at use shortened communication;

b) mastering the language phenomena on base of the communications mainly.

The First way is well presented in the known grammatical and translating system of the education of foreign language. According to this methods, the education was built on research of grammatical (and somewhat other language) of the rules and lexicon with the following transition to product (construction) and decoding (reading and understanding spoken speech) speech. The Perennial experience has shown that this way is not effective. Using rules and vocabulary of the language, trainings were to reconstruct (generate) new language for them. The Way of the assimilation lay through huge amount of mistakes, slowing the rate of the assimilation of the language and lowering interest to study.

The Second way to learn the language (through communication) turned out to be more efficient though such education also contained much defects. The underestimation of the realization mechanism language, formed in the manner of rules, reduced the quality of holding foreign speech, enlarged the periods of the learning of the foreign language. In total, modern literature was marked rapprochement these two ways of the education language. The fact is significant to the extent that that he empirical way has proved the unity of the language rules and action.

The use of the communication methods – objective necessity, dictated regularity of any education as such. As it is well known, everything that a person trains to, he gains it to use in future activity. It is also known that the use the knowledge, abilities, skills is founded on carrying, but carrying depend, first of all, on adequacy of conditions of the education that condition, in which these knowledge, skills, and abilities are expected to use. Consequently, preparing the student to participation in process of the foreign contact it is necessary in condition of the foreign contact, created in auditoriums. This defines the essence of the communication contact, which is concluded in that process of the education is a model of the process of the contact. In this case communicativeness is considered not as methodical principle, even if it’s leading, but as methodological principles, which defines, on one hand, methodical principles of the education, but on the other – choice of general scientific methods of the cognition source for building of the process of the education.

In accordance with communication method education varies depending on level trained. First of all, scholastic process is oriented on contents, which helps to orientate in the world of the foreign culture, develops the own world of the vision of the different cultures. Trainees emerge as active partners on contact; they spur to realized and independent use of language and speech facilities. The trainings have a social nature, frontal work is changed to partner work, the individual and group.

1. The Organization of the contact -skills to interpersonal communication.

2. The Maintenance of the contact, determination to feedback, plasticity of communication actions – skills of the interpersonal interaction.

3. The Analysis results contact, reflection – skills of the interpersonal perception.

Forming communication of competence is characterized presence of the following criterion: desire to enter in contact with surrounding, know how to estimate the situation of the contact, ability to organize move of the communication act itself, ability of the manifestation of empathy, reflexive behavior.

For organization of the process of the shaping communication competence it is important use the communication methods. In this connection the observance of the following features is necessary, allowing to name the educational process communication: foreign formation; the real contact; the larval sense; motivations of any actions; speech and thought activity; the relationship of the contact with the other type of speech activity; the situations as systems of the relations; функциональность; novelty and heuristic; content-richness; problematic.