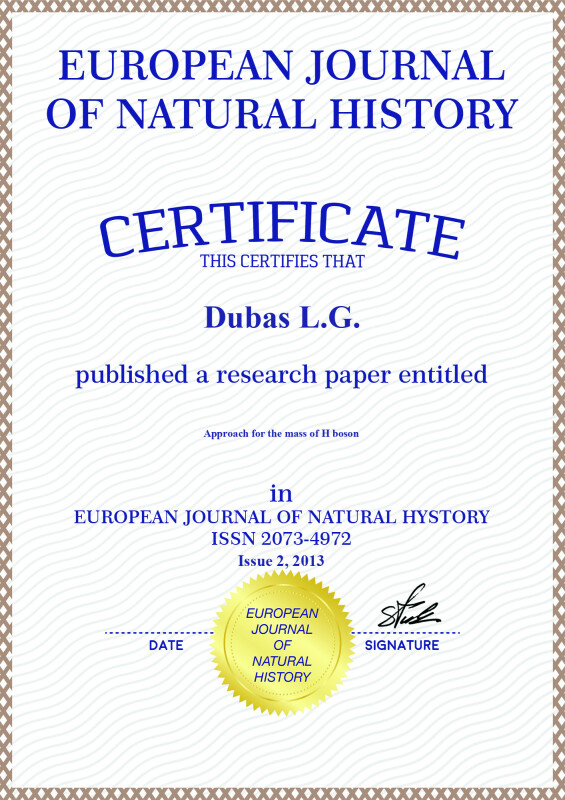 Approach for the mass of H boson

The result is presented through experimental searches in LHC, with use of samples of the data, which hypothetically correspond to exemplary approach for the mass of H boson equal to 125,979 ± 0,017 GeV/c2, where it is supposed that the mass of Z boson is equal to two differences between masses of H boson and of W boson.

Physicists of the ATLAS and of the CMS at Large Hadron Collider (LHC) in CERN could investigate an interval of masses of particles, in which detection of Higgs boson particle is probable enough. Recent experiments on LHC have learnt a particle with mass nearby ≈ 126 GeV/c2. Employees LHC have submitted data the analysis of proton collisions with energy 8 TeV [1]. The perspective area of detection Higgs boson has been declared as a range of masses nearby ≈ 126 GeV/c2, where experiments signal production of new particles.

Researchers in LHC have concentrated efforts to two channels: Higgs boson, decaying to two photons and to four electrons or to four muons. Both these channels have an excellent permission to mass, thus, the channel with two photons has a comprehensible signal at the big level of a background, and channels with four leptons have a smaller signal, but very low background. Statistical combinations of these and other channels define them in local statistical value of five standard deviations, and it means, was possible to confirm efficiency detection Higgs boson.

Let’s consider the data about bosons masses presented in reports of Particle Data Group [2] and reports of ATLAS and CMS Collaborations in CERN [1].

Let’s assume that masses of three these bosons are connected with each other by some hypothetic «trifecta» equality with coefficients of prime number.

Then we will receive following approach for the mass of H boson.

This mass value corresponds to the heaviest H boson which used in aforementioned hypothetical approach in model trifecta (2) masses of Z boson and of W boson.

The work is submitted to the International Scientific Conference «Actual problems of science and education», Cuba, March, 20-31, 2013, came to the editorial office 28.01.2013.