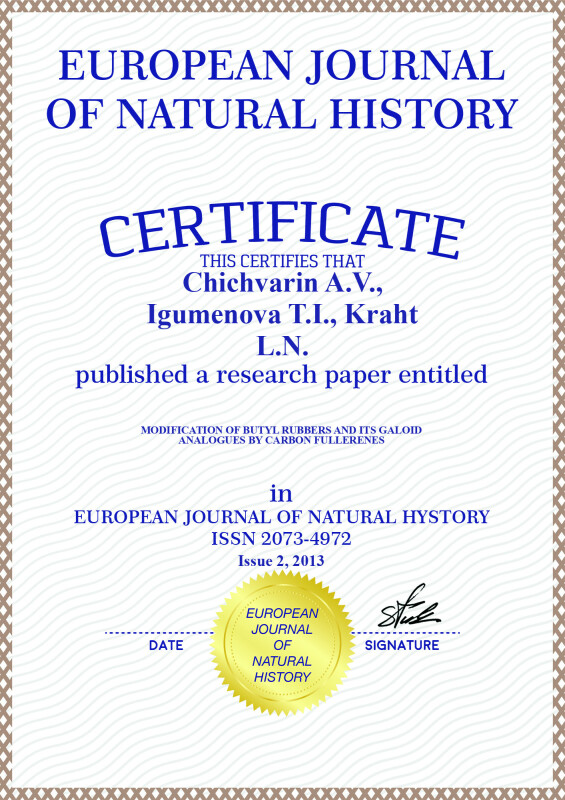 MODIFICATION OF BUTYL RUBBERS AND ITS GALOID ANALOGUES BY CARBON FULLERENES

Article in PDF
1336 KB
In this article consider influence modifier of fullerene mix on the butyl caoutchouc different functional group. Take comparative research infrared spectrum of analyze polymers. For interpretation result use discriminate analysis. Noted that the introduction of polymers in fullerene compound made of polyisobutylen contributes to the restructuring of halogenated only forms, found the seal structure in chlorine-butyl and bromine-butyl rubbers, with corresponding declines in solubility.
synthetic butyl rubber
fullerene
infrared spectrum
discriminate analysis

Using nanoameterials is allows you to get new carbon materials with improved performance, which is important for the development of science and technology. As a promising application of carbon fullerenes as a modifier of polymers in the process of mixing with the solid phase. Of particular interest is the fact that its unique property of polymer modifier as fullerenes mixture is used in traces [1].

Modification of polymers by mix of fullerenes was carried out by making the necessary concentration of toluene-soluble fullerene in solution a mixture of 3 % solution of homogenous solution of rubbers, so that the mass ratio polymer – modifier in terms of dry substance was 1: 0,03.

As the primary method of research used infrared Fourier transform spectroscopy of total internal reflection, used a spectroscopy NICOLET6700. The spectral range of 400 to 4000 sm–1. To record the optical characteristics of monolithic microfiche were received thick rubbers, order 20 microns from the aluminum substrate of the 1 % toluene solution. Oxidation of microfiches held in low-temperature laboratory electric furnace SNOL 58/350 at temperature 100 °С, duration 24 h.

For accurate interpretation of data obtained by IR-spectroscopy regression analysis was conducted. For processing the results obtained were canonical comparison of spectres, which consists in finding the dependencies of the photometric characteristics of one spectrum (1) A1 (ν) as a function of a different range (2) A2 (ν):

Advantage of this method of analysis of spectrums is that the spectral information is used to interpret the structure and interactions of substances. Spectrums can be represented as a linear superposition of approximating the single strip of Gauss functions (Gaussian):

Fig. 1. The regression equation and graphical interpretation of canonical comparison of characteristic frequencies on IR spectrum of BR

As can be seen from Fig. 1, where are the equations of the straight line regression, tangent slope is characterized by an overall increase in amplitude in system (CH3 and CH2-groups) in butyl rubber modified fullerenes. According to the law Lambert-Bouguer-Baer total concentration of these groups increases the scan layer, indicating that the microfiche seal. On the other hand, linear dependence on the lack of changes to indicate electronic structure, i.e. on the quantum level effects do not appear.

Fig. 2. The regression equation and graphical interpretation of canonical comparison of characteristic frequencies on IR spectrum of HBR

As can be seen from Fig. 2, for HBR the electronic vibrational effects are not increase, but the amplitude decreases during thermal treatment, indicating partial aeration packing of macromolecules in polymer.

Slopes indicate direct seal structure in hlorbutyl rubber. Valence fluctuation of C–Cl weakened, but this interpretation may be incorrect due to the very small peak and high density of points of equal amplitude in compared spectra. Amplitude of aliphatic groups in heat shrink, aeration packing of macromolecules in hlorbutyl rubber. Inclination in C–Cl are difficult to interpret because of the very small strip oscillation of this group.

Fig. 3. The regression equation and graphical interpretation of canonical comparison of characteristic frequencies on IR spectrum of the BBR

In brombutyl rubber, the modified fullerenes are electronic measuring vibrational state of linear groups-CH2- for both types of variations – symmetric and asymmetric and there are two new peaks that can be associated with removing fluctuations degeneracy H–C–H. Polymer structure as a whole is loosened, as slopes with transformation C–H in CH3, is less than one. Heat loosens the polymer structure, partly also suppressed effects associated with electronic vibrations. Comparison of infrared spectra of ternary and higher orders are given in Fig. 4.

In Fig. 5, it makes sense to discuss primarily the approximate angle tangents in direct dependence on the chemical nature of the polymer and influence of modification. These tangents are directly proportional to the «concentrations» of the undecided in a thin layer of structural fragments passing beam method. Here is a small overview of valence fluctuations with widening the peaks of HBR on butyl rubber and removal of degeneracy in symmetric and asymmetric stretching vibrations of C–H is the emergence of two new peaks in brombutyl.

To clarify the effect of the mixture of fullerenes in gas kinetics of rubbers was swelling. The experiment was to measure the mass of rubber, at regular intervals (1, 3, 5, 10, 20, 30 minutes) during his swelling and subsequent solubility in toluene. Rubber submerged in toluene, at certain intervals, removed it and dragged toluene weighed. The obtained data are presented in tabular form.

The ratio of velocity of dissolution rubbers.

Thus, it can be concluded that the imposition of a mixture of fullerenes in polymers made of polyisobutyl class helps the restructuring only galoid forms. Effect of fullerenes increases resistance elastomeric to polar solvents and allows for some way to predict the movement of gases increases by a polymer structure.

Studies lead to the following conclusions:

1. The interaction of carbon fullerenes with macromolecules of polymers when exposed to temperatures in the presence of oxygen, occurs through its consistent adherence to the chain of the macromolecule through oxygen, resulting in a partial aeration structure of polymers.

2. Change of the spatial structure of galoid forms of butyl rubber when modifying a mixture and formation of supramolecular fullerene structure is confirmed by decline-specific swelling of modified polymers and solubility in toluene, basic physico-chemical indicators are stable.