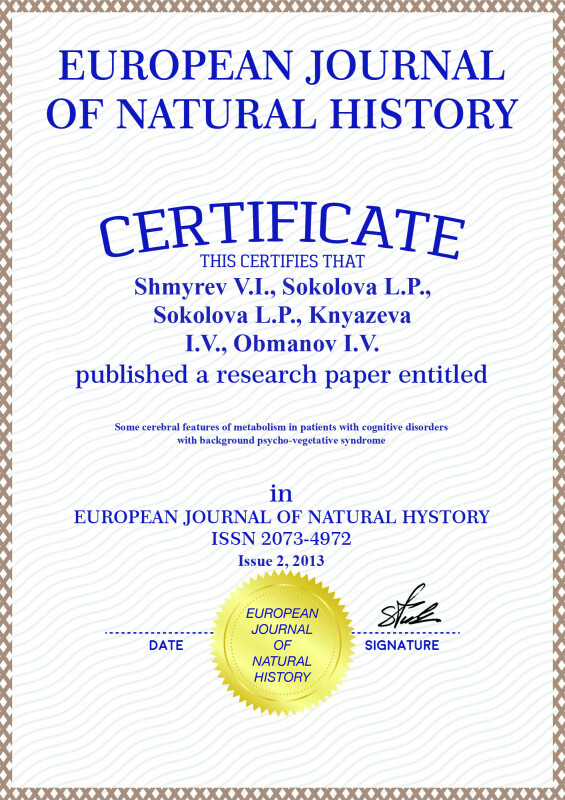 In the environment of intense rhythm of modern life, emotional and information overload the cognitive disorders develop in background of psycho-vegetative syndrome (PVS) not infrequently in frames of anxiety or anxiety depressive disorders. Usually, cognitive deficit presents with mild to moderate disorders. Accordingly to statistics, more than 25 % of patients of the somatic network have PVS [1]. In some patients the vegetative symptoms are leading in clinical presentation, in others the mental disorders come to the fore [2]. Cognitive disorders coexist with anxiety and depressive conditions, and later they can aggravate resulting in professional and social disadaptation. These studies of cerebral metabolism in pre-dement impairments with background PVS will allow to make patient’s complaints objective, and to improve the treatment and prevention of cognitive disorders.

Purpose of the study: to investigate cerebral metabolism in patients with PVS to improve the treatment and prevention of cognitive disorders.

Materials and method. To study cerebral metabolism, 29 patients with age under 55 with mild to moderate pre-dement cognitive disorders and 20 healthy volunteers without signs of cognitive disorders as a control were examined. Cerebral metabolism was estimated with help of neuroenergy mapping (NEM), the electrophysiological method based on the detection of level of constant potentials (LCP), slowly varying potential of millivolt range reflecting membrane potentials of neurons, glia and hematoencephalic barrier.

Conclusions. Assuming all the data on increased metabolic processes in 58,6 % of the examined subjects that indicate to the activation of backup pathways, it is reasonable to recommend sedation in combination with antioxidants and non-stimulating neurometabolic drugs to the patients with pre-dement impairments with background PVS.

The work is submitted to the International Scientific Conference «Modern Problems of Experimental and Clinical Medicine», Thailand, February, 20-28, 2013, came to the editorial office оn 21.01.2013.