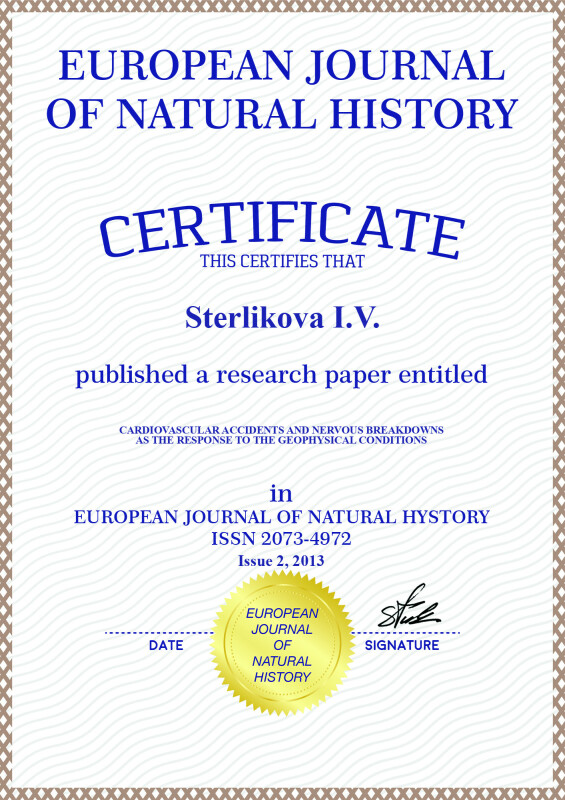 The heliobiological communications research draws the attention of the scientists for a long time [Сhizhevsky A.L.1934, Novikova K.F., Ryvkin B.А.1971]. This problem has the big urgency in the connection with the advancement of the persons in a space. The ionospheric spherical waveguide (the walls are formed by an ionosphere and a surface of the Earth) is a source of five resonant frequencies theoretically calculated by Schuman [Balser M. and Wagner C. 1960]. The ionospheric waveguide is excited by thunder-storms in the low geomagnetic latitudes. The waveguide frequencies of 8 and 14 Hz are close to frequencies of one of the rhythms of the biopotentials of a brain of the person (an alpha a rhythm: 8–13 Hz), measured by the German doctor of the psychiatry G. Berg in 1924. In my opinion, the ionospheric a waveguide is not the unique natural resonator. The excitation sources can have the various physical nature. According to the geophysical researches presented by [Sterlikova I.V., Ivanov A.P. of 1997], the plasmosphere (one of the structural areas located higher than the ionosphere) can be the amplifier of the high-frequency geomagnetic pulsations. It is necessary to notice the American researchers have registered the Shuman’s resonant frequencies by the sputnik on the distances from the Earth above an ionosphere [Simoes F. et.al., 2011] – 450–800 km that corresponds for the plasmosphere. The plasmosphere is dynamical, its dynamics depends on the geomagnetic activity. According to the geophysical net of the stations on the ground surface, the region of the projection plasmopause on the ground surface is displaced to the south with growth of the geomagnetic activity that testifies to approach of the boundary of the plasmosphere to the Earth. The plasmosphere decreases in sizes. The above geomagnetic activity, the above strengthening high-frequency a component of the geomagnetic pulsations in the plasmosphere. According to photo from the American automatic space vehicle IMAGE (NASA) for 31.01.2001 [www. astronet.ru/db/msg/1167179], the configuration of the plasmopause becomes complicated in the indignant geomagnetic conditions, there is a tail towards the Sun in evening sector.

Murom located in region of the middle-latitude geomagnetic can test whims of the space weather on itself under defined geophysical conditions developing in the plasmosphere. The article purpose is to check concept of the heliobiological communications in the middle-latitude region removed from so-called auroral geophysical zones of the intrusion of the plasma of a solar wind up on a statistical material. The researches of the interrelation of the sudden death from the cardiovascular illnesses and from the nervous breakdowns and the presence or the absence of the geomagnetic pulsations are conducted in the article. The data of the station of the first medical aid and the data of the middle-latitude geophysical observatory in Borok of Yaroslavl region are used in the article. The geomagnetic pulsations have been chosen with the frequency range close to biorhythms: РС1(regular pulsations, pearls), IPDP (irregular pulsations with the decreasing period), Pi1 (irregular pulsations with the period from 1 to 40 s). Sudden death was observed in most cases at a long absence of the high-frequency geomagnetic pulsations in a frequency range close to the basic biorhythms of the person.. The conclusions in the article coordinate by [Sterlikova I.V.,1990 and 2012] and with results of the Australian scientists [Buxton J.R. et.al., 1987] who have achieved simplification of a syndrome of Parkinson on the rabbits irradiated by artificial pulsations of the electric and magnetic fields with the frequency of 8 Hz and with the amplitude 0,7 V and 1000 нТl, accordingly. As it is known, an alpha rhythms of biopotentials of a brain of the person, a cat and a rabbit coincide.

The work was submitted to International Scientific Conference «Innovative medical technologies», France (Paris), March, 15-22, 2013, сame to the editorial office on 23.01.2013.