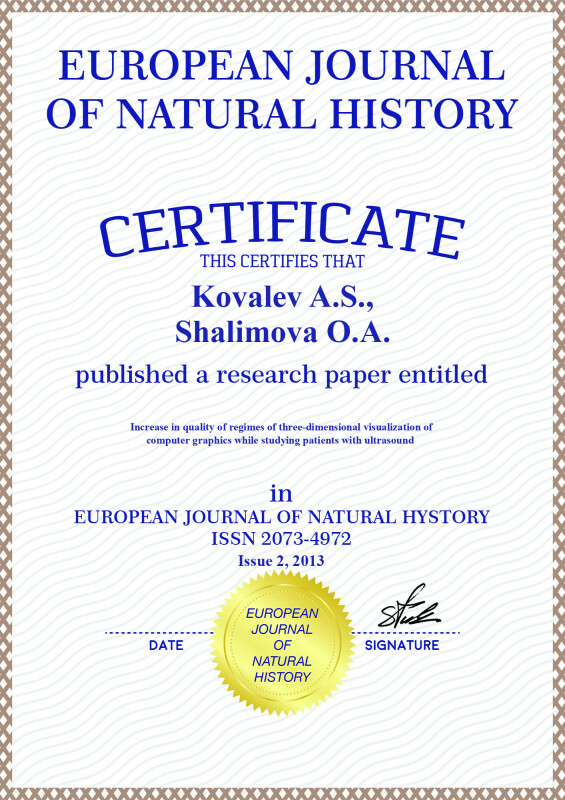 Intense development and improvement of medical ultrasound technics is founded on using scientific basics of radio and echo ranging, digital electronics, semiconductor technics. Modern medical ultrasound scanners allow us to receive three-dimensional pictures of objects with a resolution of 0,1 mm, Doppler methods allow us to evaluate blood flow in vessels, motion of heart walls and other tissues of the organism with a speed of lower than 1 cm/s.

A reasonability of using volume ultrasound nowadays does not cause any apprehensions while demonstrating images of organs or objects on PC monitor. Nevertheless, two-dimensional ultrasound is a basis of modern echo ranging that provides for a solution of a number of clinical problems of obstetrics, diagnosing diseases and defects of an embryo development. Therefore, a possibility to obtain three-dimensional images of high quality with US will allow us to receive an image for a visual evaluation quickly and increase its real quality.

In order to optimize two-dimensional picture on PC screen one should increase its resolution via increasing a number of channels. However, in this case, frequency of frames of raster scan decreases. While setting a high density, a number of scanning lines increases, and it increase an image resolution.

In order to decrease grain of an image and simplify diagnosing it is recommended to overlap several frames. An increase in an index of average image makes motion of picture on PC screen smooth and slow. At the same time, the real frame frequency does not decrease. However, while studying highly mobile organs, for example, in an obstetrics program, or echocardiogram, we recommend to turn this option off. In order to make an image smoother and clearer it is necessary to set a value of dynamic range in an interval of 40 to 180.

While selecting the option FSI (visualizing a complete range), it is recommended to set the value from 1 to 3. Thus, it will be possible to receive a clearer resolution at less deep areas and then use a resolution with a higher penetration to study deeper structures. One should consider the fact that is control volume is set for 2D image, it will show, at which part Doppler specter is studied. Changing a position of control volume should be done with a trackball. A position is represented in the format xx.x@yy.y mm.

To increase a quality of three-dimensional reconstruction it is necessary to adjust contrast of the selected structures in 2D mode and set a lower limit value. A clear image from the border of inquiry window to a certain surface can be provided vie removing noise in case values of grey surface are lower than values of surface. An upper limit should be selected of value no more than 255. In case values of surface reconstruction algorithm exceed a limit value, surface borders should be marked and adjusted with a scroll box of the upper limit value.

A regime of multiplane reconstruction of three-dimensional image provides for an observing frontal, sagittal, and axial sectors of volumetric image.

The work was submitted to International Scientific Conference «Innovative medical technologies», Russia (Moscow), February, 26-28, 2013, сame to the editorial office on 23.01.2013.