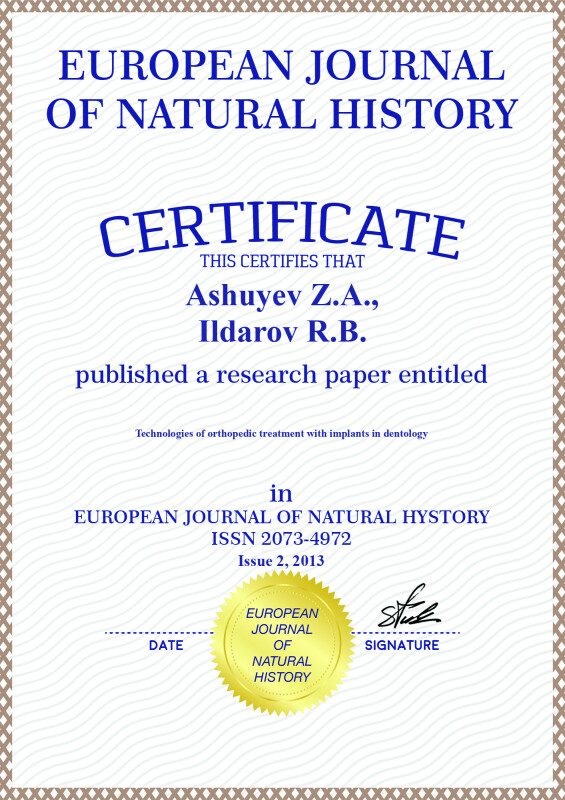 Technologies of orthopedic treatment with implants in dentology

The article represents a scientific foundation of optimal prosthesis’ constructions with usage of tooth implantation.

Plan of technologies of orthopedic treatment using implants should define a sequence of implants’ loading in earlier and later terms. A possibility to define initial anatomic-topographic terms of implantation, optimal prosthesis period, and reasonability of facilitating a certain methodic of surgery and prosthesis construction emerges.

The objective of this research is clinical foundation of optimal constructions of prosthesis using teeth implantation.

Federal State institution Central scientific-research institute of stomatology and maxillary-facial surgery of Ministy of healthcare of RF served as a research base.

A final selection of prosthesis method, construction, and methodic of placing implants is made according to a balance of the mentioned factors in each specific situation.

Thus, if definition of a volume of bone tissue gives us information on which implant we can use, type of adentia and type of maxillary bone architectonics, and also prosthesis construction predetermine what implant should be used in a specific clinic situation.

Naturally, factors that define prosthetic method and type of implants should serve as a premise in planning treatment. A volume of the possessed bone can be considered as a secondary factor that defines initial conditions, needed for implantation. Bone volume is a variable value, as concepts «sufficient» of «insufficient» implies different qualitative characteristics for different types of adentia and prosthetic methods. For example, bone tissue height of 10,0 mm and its width of 3,5–4,0 mm in the area of lacking corner tooth is insufficient for placing an implant and further fixing of tooth on the implant itself, as in such clinic situation, an implant 10,0 mm high and 3,5–4,0 m in diameter should be used. At the same time such bone volume cannot be considered as an unfavourable anatomic premise for implantation for some different types of adentia.

Inadequate volume of bone tissue cannot serve as a sufficient foundation for denying implantation or using a different type of implant, usage of which is unreasonable in a certain clinic situation. In order to create adequate anatomic-topographic conditions direct regeneration and bone transplantation, methods of distraction osteogenesis, can be utilized.

Apart from defining optimal prosthesis construction, type, size, and amount of implants, needed for realizing an acceptable prosthetics, a tactics of introducing surgical stage of treatment should be developed.

Besides, first of all, it is necessary to define implantation method and period of removing implants from functional loading in a certain clinic situation.

One-stage methodic of placing implants wit early functional loading can be used for types I and II of bone architectonics and anatomic-topographic conditions, favourable for implantation:

• presence of conditions for careful adaptation of surgery wound edges in implant area;

In other cases two-stage method of implantation should be preferred.

Factors that influence period of removing an implant from function are: type of architectonic, variant of placing implant in relation to compact bone layer, and anatomic situation.

A direct functional loading over implants and the surrounding bone can be placed in case when implants have an inter-bone height no less than 10 mm, is architectonic of bone tissue corresponds to type I or II. In other cases implants should be involved into functional loading after 2–3 months of their placing. Under regressive transformation of bone (types V–VI of architectonics), unfavourable anatomic conditions, and usage of unusual methodics, period of removing implants from functional loading should be increased up to 4–6 months, and sometimes even 10 months.

Two approaches can be used in replacing single defects of teeth rows:

2. Introduction of one of intact teeth into a prosthesis as an implant support.

Both approaches imply usage of implants of screw and cylindrical shape

Medical observation was carried out on 78 patients.

While replacing defects in area of one-root teeth, using implants with inter-bone diameter less than 4 mm, and height – 10–14 mm with joining temporal orthopedic construction with intact teeth should be considered as an optimal way of action; surplus micro motion over the system «implant-bone tissue» should be excluded.

In case a prosthesis has two points of support (two implants or an implant and an intact tooth), implants of any, even minimal height of inter-bone part can be used (8 mm for two-stage and 10 mm for one-stage implants).

The work is submitted to the International Scientific Conference «Present-day problems of science and education», Russia, (Moscow), February, 26-28, 2013, came to the editorial office on 23.01.2013.