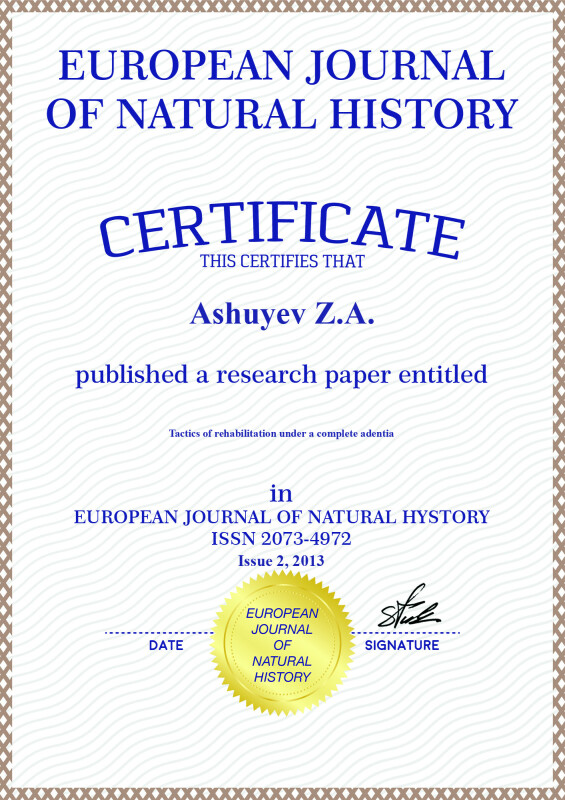 Tactics of rehabilitation under a complete adentia

The article represents a scientific foundation of optimal prosthesis’ constructions with usage of tooth implantation.

In almost all countries dental pathology remains one of the most spread. Teeth loss is reflected in an overall health condition of a man (Кalininskaya A.A, Sadikov M.K., Kunitsyna N.M. 2012).

One of the prior objectives of planning dental orthopedic treatment is selection of prosthetics technology. We should clearly define in what cases implantation for fixing removable implants should be implemented, when it is reasonable to carry out non-removable prosthetics with usage of cement, and when one should construct conditionally-removable implants.

It is necessary to pay an increased attention to introduction of adequate orthopedic methods of treatment for persons with a complete teeth loss who need modern constructions of teeth implants in order to restore chewing function.(A.V. Aimkiy, 2012).

The objective of this research is a scientific approval of selecting prosthetics tactics under a complete adentia.

Central scientific-research institute of stomatology and maxillary-facial surgery of the Ministry of healthcare of RF served as a research base.

In order to select a prosthetics method under a complete adentia we can use the following criterions:

1. Removable prosthetics with fixing on implants can be used in case when a patient has already used a tooth implant, but, due to an atrophy and worsening of terms for anatomic retention, fixing became unsatisfactory.

If, due to any reasons, removable prosthetics and fixing with implants is considered as a the most favourable treatment method, it reasonable to construct a removable implant first and give a patient 3–4 months for adaptation, besides, this decision should be conscious; further treatment with implants can lead to the desired result. Otherwise, there is a significant risk of that a patients will not be able to adapt to a removable implant, even if its fixing is provided reliably with implants and locks.

3. Non-removable and conditionally-removable prosthetics are the most rational approaches for a functional and social rehabilitation of patients with a complete adentia. These approaches can be implemented practically in all cases, even under unfavourable anatomic-topographic conditions due to a significant maxillary atrophy. Nowadays there is a sufficient arsenal of surgery methodics and technologies of making teeth implants for carrying out implantation and non-removable or conditionally-removable prosthetics under a complete adentia.

4. Non-removable prosthetics can be reasonable on nonseparable implants, when there is a possibility for a direct functional strain, in other words, prosthetics after 7–10 of implantation.

However, non-removable prosthetics cannot be considered as a main, most favourable approach.

We should consider the fact that fixing implants with cement does not give us a possibility to manoeuvre in case of problems. For example, re-cementing on an implant can lead to a functional overloading of bone tissue that surrounds other implants. Such implant should be knocked off and re-cemented. However, knocking off an implant, fixed with a cement on other implants (as well as on teeth) can lead to a dislocation or even removal of implants that were not re-cemented. Therefore, non-removable prosthetics can be used in cases when it is impossible to use conditionally-removable implantation. Clinic situations when conditionally-removable prosthetics represents significant complications, we can observe:

• under a significant vestibular inclination of alveolar sprouts and placed implants in combination with insufficient inter-alveolar space for placing inclined heads. In such situation screw vints and holes that fix an implant can appear on vestibular side of the implant even with usage of inclined heads of implants that is unacceptable from an aesthetic point of view;

• under protrusive bite, when there is no place for fixing screw vints. Such situation can be observed under an adentia of lower jaw and presence of one or several teeth in frontal department of upper jaw.

5. Conditionally-removable prosthetics can be considered as an optimal method of rehabilitating patients with a complete adentia. Such variant can be realized in a suppressing number of cases, even under a significant atrophy of bone tissue of jaws and unfavourable anatomic-topographic conditions.

Thus, while planning treatment of patients with a complete adentia we can implement the following approaches and their sequence:

а) conditionally-removable prosthetics on two-stage implants of screw or cylindrical shape as an optimal method of treatment;

b) non-removable and combined prosthetics on one- and two-stage implants of different shape as an additional way of treatment;

c) making complete removable teeth prosthetics with their fixing on two-stage implants of screw of cylindrical shape as a palliative method of treatment.

Apart from planning a final, constant prosthetics of patients with a complete adentia one should also solve the problem what a patient will do and how he will live during 2–3 months, and sometimes more time, while the process of reparative regeneration of bone around the placed implants is underway. Many patients cannot and don’t want to be placed in social isolation due to lack of teeth, disturbance of speech and appearance. Therefore, while planning treatment, if a patient desires, one should consider temporal prosthetics that would allow the patient to restore speech function and correct facial features, and at least a partial chewing function.

The work is submitted to the International Scientific Conference «Present-day problems of science and education», Russia, (Moscow), February, 26-28, 2013, came to the editorial office on 23.01.2013.