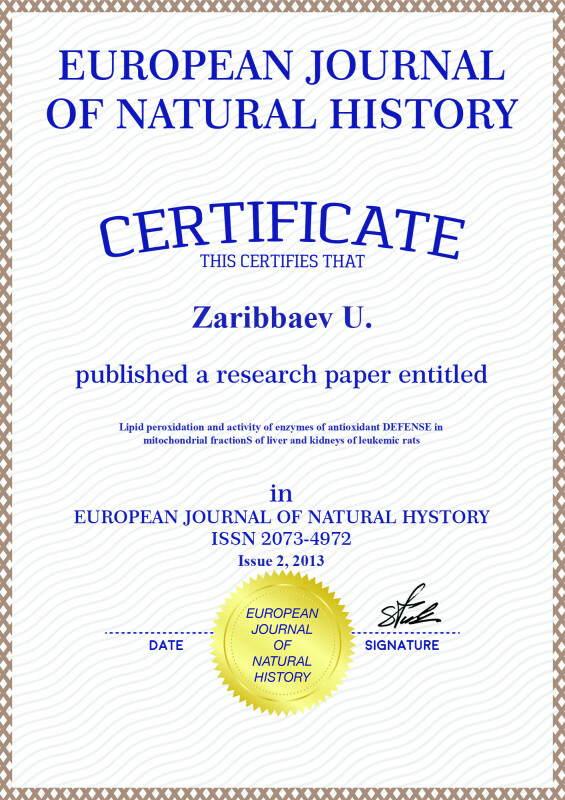 Zaribbaev U. 1
1 Research Institute of Hematology and Blood Transfusion

Article in PDF
195 KB
In the dynamics of development of leukemia in the mitochondrial fractions of liver and kidneys is noted intensification of lipid peroxidation and inhibition of antioxidant defense enzymes. In liver, an imbalance in the LPO/AOD system is observed at 6 and 8 months, whereas in kidneys processes of lipid hyperperoxidation begin later (at 7 month of experiment), increasing with progression of the disease. The enzyme activities of SOD and catalase are particularly reduced. Compensatory possibilities of AOD in the removal of active forms of radicals in liver changes in waves, whereas in kidneys are progressively inhibited.
leukemia
experiment
liver
kidney
mitochondria
lipid peroxidation
antioxidant defense

The existence of cells under aerobic conditions is associated with constant risk of uncontrolled formation of toxic forms of molecular oxygen as in the body due to products of oxidative metabolism, as in the environment, in particular as a result of negative anthropogenic impact of modern civilization. Interaction of active forms of oxygen with organic molecules leads to the formation of organic free radicals [4, 13, 16]. Several researchers [4, 13, 16, 17] established their pathogenic function for many diseases and at different degrees for any pathological conditions. One of the most terrible consequences of prolonged effects of increased number of highly active oxidants on the body is known to be neoplastic transformation of cells, leading to the development of malignant tumors [13, 17]. However, it should be noted that active forms of oxygen have a wide range of physiological actions. In particular, oxygen free radicals are one of the mechanisms of apoptosis [3, 6, 16]. However, induction of apoptosis requires low physiological concentrations of free radicals, whereas excessive radical formation causes metabolic and functional disorders, leading to serious adverse consequences, including cell death or malignant transformation [3, 4, 16]. In leukemias, the total concentration of bound and physically dissolved oxygen is reduced. Hemoglobin oxygen saturation is decreased. This leads to development of metabolic acidosis, which is aggravated during massive chemotherapy [8, 11]. In these conditions develops mitochondrial dysfunction in various organs and tissues, as major consumers of oxygen in the cells are the mitochondrial respiratory chain, leakage of active forms of oxygen and intensification of lipid peroxidation. This is conditioned also by low capacity of antioxidant protection. All above-mentioned leads to decline of receptor apparatus of cell membranes. However, there are no published data on lipid peroxidation (LPO) and antioxidant defense (AOD) in mitochondria of main detoxifying organs – liver and kidneys – in experimental leukemia.

Objective: to estimate the intensity of lipid peroxidation and activity of antioxidant defense enzymes in the mitochondrial fractions of liver and kidneys of leukemic rats.

We improved benzyl model of leukemia which was performed in 157 male rats by subcutaneous injection of 40 % oil solution of benzyl (0,01 ml per 100 g of body weight) throughout the experiment [7, 18]. Common mortality was 40,1 %. Development of leukemia was assessed by changes in peripheral blood and bone marrow each month within 8 months from onset of the experiment by method of Anderson and Poulsen [2]. By the end of 6 month, 50 % of animals had leukemia, which rate was increased to 77,4 and 86,4 %, respectively at 7 and 8 months. At these terms, animals with signs of leukemia were sacrificed under Rausch-anesthesia, according to the rules outlined by the European Convention for the Protection of Vertebrate Animals (Strasbourg, 1986). Mitochondrial fractions of liver and kidneys were isolated by differential centrifugation. The intensity of lipid peroxidation was assessed by the level of malondialdehyde (MDA) [1]. The antioxidant defense activity was estimated by the levels of superoxide dismutase (SOD) [12] and catalase [9].

Studies have shown that in the mitochondrial fractions of kidneys of intact animals, the levels of MDA, SOD and catalase were, respectively, 1,27 (P < 0,05), 1,45 (P < 0,01), and 1,23 (P < 0,05) times lower than in liver. Based on these results, we assume that possibility of enzymatic AOD of liver mitochondria is slightly higher than in kidneys. In the dynamics of leukemia development (6 months), in liver mitochondrial fraction of experimental animals, the level of MDA was significantly increased in 1,28 (P < 0,05) times, whereas enzyme activities of SOD and catalase were significantly reduced in 1,35 (P < 0,05) and 1,63 (P < 0,01) times, respectively, indicating an imbalance in the system LPO/AOD. Later, (at 7 months), possibly due to development of compensatory processes, we noted trend to restore of balance in the system LPO/AOD. By the final deadline (after 8 months), MDA level was increased in 1,77 (P < 0,001) times, activities of SOD and catalase were reduced in 1,89 (P < 0,001) and 1,78 (P < 0,001) times, respectively, in comparison with intact animals (Table 1).

Imbalance in the system LPO/AOP is confirmed by reduction of (SOD + catalase)/MDA to 1,38; 1,73 and 0,79 CU in leukemic rats after 6; 7 and 8 months, respectively, whereas in intact rats this parameter was 2,58 CU. However, these changes had compensatory nature, as after 7 months the existing imbalance tended to recover. This was evidenced by higher values of (SOD + catalase)/MDA by this period and further decline of this compensation, contributing to the processes of membranolysis in subcellular structures of the liver.

Table 2 shows that during progression of tumor, activities of AOD enzymes, especially activity of catalase than SOD, in renal mitochondrial fraction are inhibited. This is proved by reduction of (SOD + catalase)/MDA to 1,9; 1,3 and 0,67 CU in leukemic rats after 6; 7 and 8 months, respectively, whereas in intact rats this parameter was 2,42 CU. Our findings suggest that if at 6 month of experiment onset, compensatory potential of AOD system in kidney mitochondrial fraction is still existed, preventing sharp increase of LPO, so at 7 and 8 months we note decompensation of enzymatic antioxidant system and failure of its capabilities. This promotes sharp activation of free radical processes, causing labilization of membranes and risk of renal failure, which can be exacerbated during massive chemotherapy. We can assume that in the process of leukaemogenesis, liver is involved in the disease process earlier than kidney. Our findings are similar with results of Pospelova [14] and Lasure et al. [19] who also reported earlier damage of liver, than kidney, in patients with leukemia because of liver leukemic infiltration.

Based on the analysis of data obtained and available literature [4, 6, 16], we suggest that biological effects of LPO on membranes can be divided into two groups:

(2) result of interaction of LPO products with protein molecules.

In the inner membrane of mitochondria, first is oxidized cardiolipin, which is involved in the electron transport chain, stabilization of complex I, molecular organization of the inner membrane, anion transport, binding of cytochrome C and functioning of the inner membrane enzymes in the synthesis of ATP, as well as controls apoptosis. This increases permeability of membrane, changes its charge and conformation of lipoprotein complexes, leads to formation of hydrophilic sites and calcium leakage. Peroxidation of membrane proteins leads to increase of microviscosity of membranes, changes of their surface charge, as well as appearance of oxidized hem-containing proteins and amino acid derivatives. The totality of these events causes uncoupling of oxidation and phosphorylation in mitochondria, creating a vicious cycle of bioenergy hypoxia in the investigated organs.

Voltage of erythrocyte germ of blood formation in leukemia leads to decompensation of erythropoiesis, changes in the structural and functional states of erythrocyte membranes, impairment of microrheological blood properties [5, 15]. According to Kopteva et al. [8], rheological blood dysfunction is an important pathogenic factor for development of complications in hematologic diseases, determining in particular conditions of survival after severe complications. Studies by Maslennikova et al. [11] reported that hypoxia is an independent predictor for tumor progression due to its influence on various metabolic, molecular-genetic and pathophysiological processes: proliferation, apoptosis, angiogenesis and metastasis. In this case, Orevic et al. [20] observed expression of factor HIF-1α in hypoxia, which is a natural marker of tumor hypoxia [20]. Studies by Makeshova et al. [10] showed that patients with acute leukemia at all stages of the disease develop hypoxia and increased HIF-1α level in leucocytes. According to authors [10], this may be associated with occurrence of favorable conditions for tumor, increase of glycolysis and the need of tumor tissue for energy.

In liver mitochondrial fraction of leukemic rats, the level of MDA is sharply increased at 6 month, and then it is reduced due to compensatory processes and is sharply increased again by the final deadline. The AOD enzyme activity is reduced. Compensatory possibilities of AOD in the removal of active forms of radicals in liver are changed in waves.

Processes of lipid hyperperoxidation in kidneys start later (at 7 month of experiment), and are intensified with progression of the disease. The enzyme activities of SOD and catalase are particularly reduced. Compensatory possibilities of AOD in the removal of active forms of radicals in kidneys are progressively inhibited. Uncoupling of oxidation and phosphorylation in mitochondria in the investigated organs develops a vicious cycle of bioenergy hypoxia, leading to liver and renal failure, which can be exacerbated during massive chemotherapy.