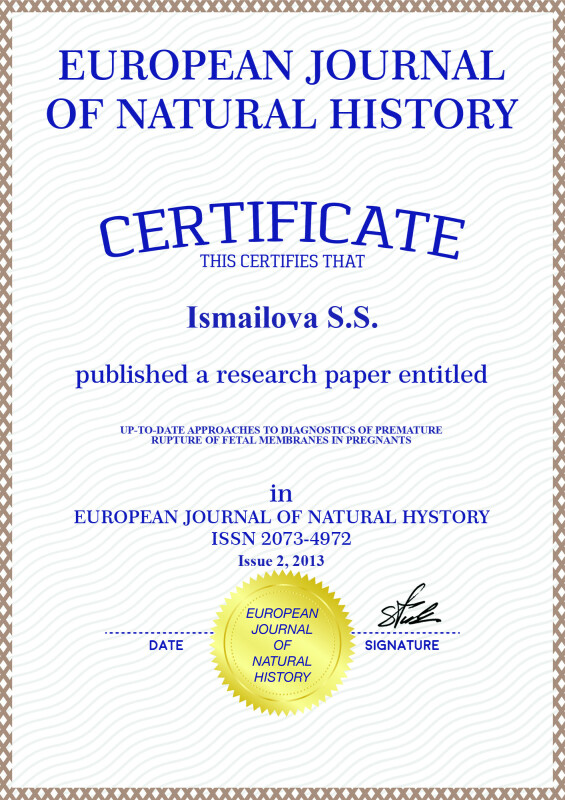 Article in PDF
190 KB
To put an accurate diagnosis is a key moment for further obstetric tactics. Mistakenly fixed diagnosis may lead to unfounded hospitalization on the one hand, and to unjustified long wait and see attitude of obstetrician on the other hand.
premature
rupture
fetal
membranes

Inspite of much progress of modern medicine, miscarriage problem remains one of unsolved problems all over the world [1, 4]. Prenatal mortality from prematurity takes the first place in the structure of the cause, the indexes of mortality are the highest in newborns with extremely low and very low of body mass [1, 2, 3, 4].

Premature rupture of fetal membranes (PRFM) in pregnants presents one of the most important problems in obstetrical practice. This is more often cause of premature birth and severe complications in newborns. Incorrect diagnosis of premature rupture of fetal membrane of pregnants may lead to unfounded actions (for example, hospitalization or pre-term delivery), but late diagnostics results delayed reaction of obstetricians and growth of infectious-inflammatory complications. It is impossible to forget, that conducting the pregnancy which complicated PRFM is the most expensive [3].

PRFM in pregnants unavoidably leads to the development of birth activity during some days. Particularly this complication is especially dangerous in incompletely pregnancy: adaptative possibilities of immature fetus are low but risk of premature birth is high, equally as and danger of respiratory distress-syndrome of the fetus, infectious-inflammatory complications in newborns and women in childbirth. In the USA premature rupture of fetal membrane makes conditional 18–20 % cases of prenatal mortality [4].

The rate of neonatal complications depends on in what term of pregnancy was PRFM. Presence of PRFM in incomplete pregnancy increases prenatal mortality in 4 times, morbidity of newborns in 3 times, including respiratory distress-syndrome (appears in 10–40 % cases of PRFM in incomplete pregnancy), but in 40–70 % cases appears the cause of death of newborns.Unfortunately, the rate of them is increased in PRFM, concerned also hypoxia of the fetus and asphyxia of newborns , anomalies of birth activity, premature detachment of placenta.Intra-amnoitic infection develops in 15–30 % pregnants, which is realized postnatal endometritis in 2–13 % women with PRFM in incomplete pregnancy. Chorioamnionitis is often manifested after prolonged waterless period, oligohydramnios, multiple vaginal investigations [1, 4].

There is no clear presentation about diagnostics and treatment of PRFM in women with incomplete pregnancy yet. Inspite of extensive knowledge about causes and mechanisms of PRFM no one country did not solve this problem until now.

Study is based on clinical-laboratory examinations of 124 pregnant women with premature rupture of fetal membranes in different gestational terms, who have been under the care of doctors and have been admitted to the obstetrician department of Andijan regional prenatal centre from 2009 to 2011. Pregnant women with PRFM were divided into 3 groups by continuance of waterless period:

– 1 group of 41 (33,1 %) women with PRFM, who have been prolongation of pregnancy in the condition of waterless period,continuance which composed to 24 hours.

– 2 group – 43 (34,7 %) women with PRFM, who have been performed prolongation of pregnancy in the condition of waterless period ,continuance which composed to72 hours.

– 3 group – 40 (32,3 %) women with PRFM, who have been performed prolongation of pregnancy in the condition of waterless period ,continuance which composed more than 72 hours.

Cough impulse sample has low sensitivity, affirmative response was observed about in half of examined pregnants. Amniotic fluid admixture on the subject glass, which is taken for sample of vaginal contents forms pictures look like to the leaves of fern (fern phenomenon). This method may give more quantity of false-positive results enough because of admixture of sperm elements, separating cervical channel and even in the presence of fingerprints on the subject glass. False –positive results might be taken because of blood admixtures or as a result of deficient quantity of material sampling («dry tampon»). Phenomenon «fern» was observed in 1 group in 17 (41,5 %) pregnants, in 2 group in 19 (44,2 %) and in 3 group – in 24 (60,0 %).

Amniotic fluid has normal or slightly alkaline environment (pH 7,0–7,7), whereas vaginal medium is acid (pH 3,8–4,2). At entrance amniotic fluid in vagina acidity of vaginal contents is decreased, that is detected by nitrasin test-stria.

It is known, that informativity of nitrasin test and fern phenomenon are decreased by increase the time from moment of rupture of fetal membranes. In prolonged PRFM cases these tests give not much information than routine obstetrician investigation.

Threshold of AmniSure® test sensitivity composes ng/ml that provides 99 % precision of PRFM definition even in incompletely pregnancy. But in our studies positive response was in all investigated pregnancies (100,0 %).

In the Table 2 were given results of specificity and sensitivity of used methods, the highest sensitivity has test Аmnisure.

Diagnosis of PRFM is based on pouring out much quantity of clear fluid without color and odor (amniotic fluid). In little, as called subclinic ruptures when only insignificant flow of amniotic water has, diagnostics may cause expressed difficulties.

Insignificant flow of amniotic water does not decrease the development risk of complication, on the contrary increases danger. It is connected with this, which from the moment of integrity disorder of fetal membranes until defining this complication may pass much time.

The most effective test is AmniSure®, threshold of sensitivity which composes 5 ng/ml, which provides 99 % precision of defining premature rupture of membranes even in incompletely pregnancy.