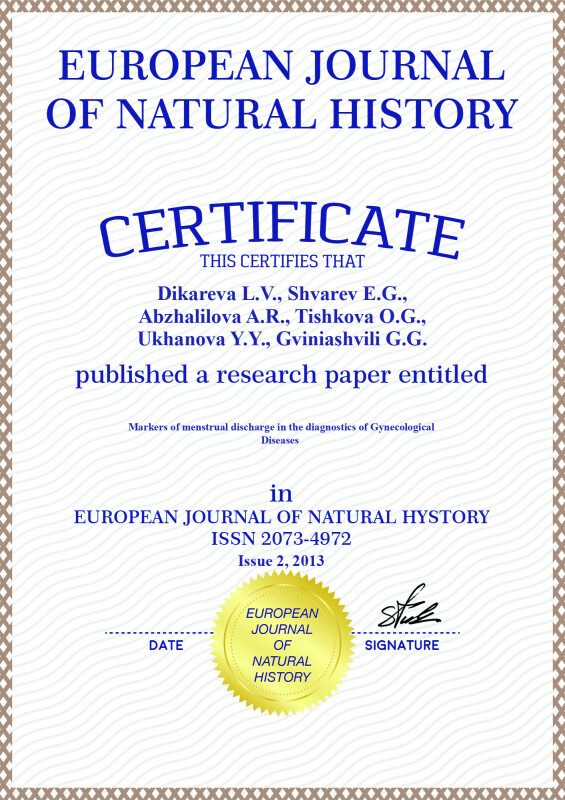 Markers of menstrual discharge in the diagnostics of Gynecological Diseases

Article in PDF
199 KB
Menstrual discharge is the complex in structure and biochemical indicators biological fluid which is cyclically secreted into the uterine cavity, and then released from its. Laboratory study of menstrual discharge is up till now poorly studied, non-invasive, promising method of early diagnosis of diseases of female reproductive organs. Investigation of menstrual discharge gives an integrated assessment of both local and systemic homeostasis at physiological and pathological processes of the genitals. In this article we made an attempt to summarize the data presented in current literature which relate to the above topics.
menstrual discharge
Gynecological Diseases

Menstruation – physiological, cyclically repeated hemorrhage from the uterine lining occurring in women and females of certain mammal species from the reaching of the age of puberty until the end of reproductive life.

Menstruation usually begins between the ages of 12–14 years (menarche), is stabilized immediately or within a few months, lasts 3–5 (rarely to 7) days. The first experience of menstruation in 15 years and later, the painful period, as well as long period (more than 5–6 months) before a regular menstrual cycle is stabilized allow us to think about the inferiority of its regulation, which is often observed in the infantilism and genital hypoplasia.

The average volume of menstrual fluid during a monthly menstrual period does not exceed 70,0–80,0 ml. Changing in the amount of blood lost, and the frequency of menstruation may indicate the presence of some gynecological diseases.

Normal menstrual cycle is characterized by successive changes in the endometrium of four phases: desquamation, which is manifested in menstrual bleeding, regeneration, proliferation and secretion

A characteristic morphological feature of desquamation phase is the presence in the menstrual discharge collapsed, penetrated with hemorrhage of star-shaped endometrial glands and glomus of the spiral arteries. On the first day of menstruation the separate groups of predecidual cells and tiny particles of the endometrium, having the viability and ability to implant can be still recognized in the compact layer in areas of hemorrhage.

Accumulate, and then arising from the uterus the menstrual discharge mixed with endometrial secretion, which has an alkaline environment, and as a rule, cannot coagulates and has the characteristic dark color.

According to the content of the α2-microglobulin of fertility in the menstrual discharge L.V. Posiseeva (1991) proposed to evaluate the functional state of the endometrium: thus, the number of α2-microglobulin of fertility in menstrual discharge of women with two-phase menstrual cycle is hundred times higher than in peripheral blood serum and the majority of women (81,7 %) are in the range from 16000 to 70000 ng/ml [14].

Determining the level of the α2-micro_globulin of fertility in the menstrual discharge may be one of methods to diagnose of a particular form of female sterility – habitual miscarriage in the early periods from 2 to 4 weeks of pregnancy. This form of sterility, the identification of which requires special methods of investigation, unfortunately, is not always objectively assessed in routine clinical practice. In cases of early, with subclinical variant of the course of spontaneous abortions, the concentration of α2-microglobulin of fertility in the menstrual discharge is 50–100 times higher than the concentration of this protein in normal menstrual discharge, and reaches 80 000 ng/ml or more.

The concentration of α2-macroglobulin involved in the physiological regulation of blood coagulation, clot lysis and complement did not practically differ in the menstrual discharge and in the peripheral blood serum (3,49 and 3,68 mmol/l, respectively) [4].

In addition to studying of the fibrinolytic activity of proteins, the researchers compared the concentrations of albumin, IgG and α2-antiplasmin, which rates were similar both in the menstrual discharge and in the peripheral blood serum (Table 2).

In the few studies devoted to the study of lipid peroxidation and oxidative modification of proteins at the obstetrical and gynecological pathology, the most often object of study was peripheral blood serum. In the scientific literature there are practically no studies on the levels of markers of oxidative stress in the menstrual discharge – in the biological fluid, flowing directly from the uterus.

The concentration of proteins in the menstrual discharge, and in peripheral blood serum S.A. Cederholm-Williams, C.P. Margaret Rees, A.C. Turnbull (1984)

It should be noted that in the case of oxidative stress there is not an isolated damage of proteins, lipids, nucleic acids, as there is a close structural and functional interaction in biological membranes of cells between them [10]. And at the same time the antioxidant system of the body is involved in the process that regulates lipid peroxidation and oxidative modification of proteins. Increase of reactive oxygen species in cells is accompanied by a relative decrease in the level of the main non-enzymatic and enzymatic components of antioxidant protection [1, 9, 10].

In the pathogenesis of both benign and malignant tumors the processes of lipid peroxidation have a considerable place. Taking in the consideration the instability of the primary products of lipid peroxidation, the object of the study were secondary or end products, including malon dialdehyde, which has the most damaging effect on the cell.

The level of malon dialdehyde in the menstrual discharge in patients with uterine myoma with the normal structure of the endometrium in combination with ovarian tumors increased to 1,7 ± 0,04 nmol, and in patients with uterine myoma in combination with the endometrial hyperplasia, the level reached maximum values (2,8 ± 0,08 nmol) compared with the level of healthy women (p < 0,01, p < 0,001) [5].

The content of carbonyl groups of the protein in menstrual discharge in patients with uterine myoma in combination with the endometrial hyperplasia was also increased: from 4,3 to 8,2 nmol/mg (5,7 ± 0,63 nmol/mg), which was higher compared with the similar index in healthy women [5].

A fundamentally new scientific direction in the diagnosis is the theory of V.N. Shabalin and S.N. Shatokhina of the functional morphology of the biological fluid, evaluation of its self-organization processes (the method of wedge dehydration, Litos – system). In the biological fluid there are highly dynamic changes of molecular composition, the changes in nature of the interaction of various components under physiological and pathological conditions, which are the basis for the diagnosis of various diseases at the earliest stages of development [17].

To identify the endometrial hyperplasia L. Dikareva and co-workers (2008) were the first to suggest making a structural analysis of the menstrual discharge and endometrial secretion, and described three facies morphotype: radial mixed and triradial. It is shown that the pathognomonic marker of formation of endometrial pathology is a decrease in the material the area of radial cracks with simultaneous increase of the area of triradial cracks [8].

E.G. Shvarev and co-workers (2008, 2011) studied in comparison by microscopy the structural features of facies of the menstrual discharge in patients with inflammatory diseases of the small pelvis and in patients with ovarian tumors. It was found that in 38 % of cases the emergence of «tongue» structures in the peripheral zone of facies was marked in women with inflammatory diseases and the combination of «tongue» structures in the peripheral and the triradial cracks in the central part of facies was marked in 62 % of cases [19]. Increasing the area of triradial cracks points to the likelihood of forming of ovarian tumors in the patients, what requires in-depth checkup [21].

S.Yu. Sotnikova and co-workers (2001) proposed a way to diagnostics of internal endometriosis by determination of number of CD95 + lymphocytes in the menstrual discharge. So we can determine the relative number of CD95 + lymphocytes in the women’s menstrual discharge and if the values of this parameter equal to 15 % and less we can with 80 % accuracy the internal endometriosis was revealed [22].

Using of the menstrual discharge in diagnostics of gynecological pathology allows non-invasive, in small amounts of biological fluid with minimal material costs (!) in a women’s clinic, in a short time to get objective information about the status of the female reproductive system. Atraumatic sampling of the material, ease of processing and storage give a wide opportunities to do an effective prophylactic medical examination of women. To date the menstrual discharge is by-way, but it has a large amount of information on the functional and morphostructural status of female genital biological fluid. The ability to decode this information is one of the major aims of modern medical practice.