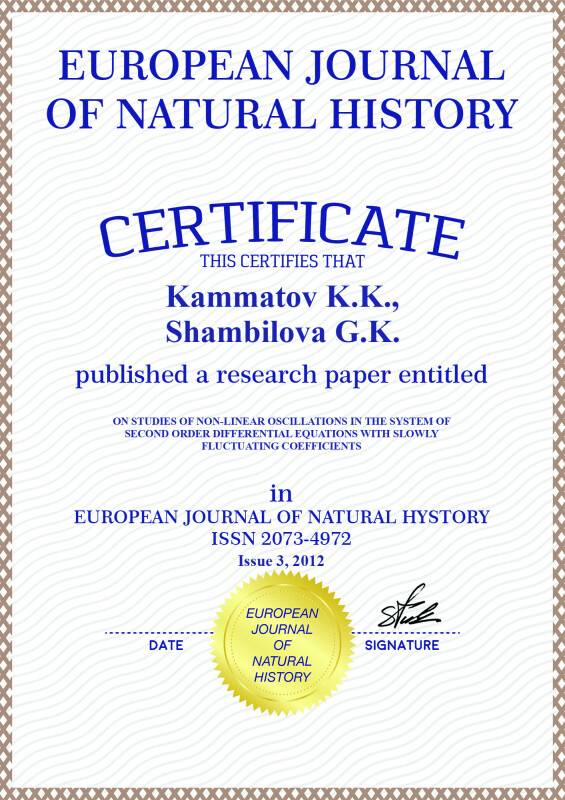 In this work conditions of solutions´ existence that are described by a significantly non-linear system of the second order of the following type with slowly altering coefficients:

- are constant coefficients, and

- are multinomials reative to x, y of any final degree of mk and they do not contain terms of lower than m - order with coefficients that are limited functions on с τ and with the first derivatives, limited on τ, μ is unlimitedly small parameter, τ = μt is slow time.

The problem study goes with the function of Lyapunov, via method, introduced by G.V. Kamenkov [1].

First of all, let us show a topological study of so-called «shortened» system. Shortened system that corresponds to initial equations (1) has the following type:

Questions of qualitative theory of stability of differential equations according to Lyapunov were studied by G.V. Kamenkov in 1935.

G.V. Kamenkov showed [1] that behavior of integral curves around the coordinates beginning of two functions:

depending on structure of these functions can be described in a number of ways. Let us say that equation F(x, y) = 0 has substantial roots (each substantial root of this equation defines a curve that, together with axis OX, forms an angle, tangent of which equals k)

Let us imply now that F(x, y) is defined in sense.

Let us write down (4) in polar coordinates:

The solution of the system (5) looks as:

Thus, in formula (7) under-integral expression is a periodical function of θ, then (7) it can be described as:

where ao, bo, an, bn are coefficients of degradation of functions

into the line of Fourier.

It is clear that (8) is an equation of spirals. If ao > 0 , they are unstable. If ao = 0, phase trajectories form locked curves, and the beginning of coordinates is the center. Periodic solution of the system (3) corresponds to the letter event.

Thus, conditions of existence of periodic solutions for system (3) comes to the fulfillment of two requirements:

a) Function F(x, y) must be defined in sense;

The work was submitted to the International Scientific Conference «Fundamental Research», Dominican Republic, April, 10-20, 2012, came to the editorial office 14.05.2012.