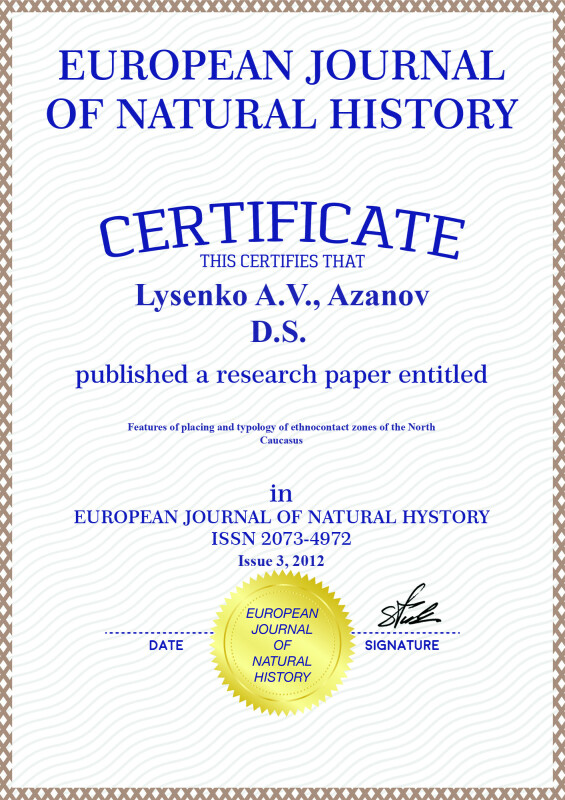 Northern Caucasus is a special, complicatedly-organized space that is populated by multiple and various in ethnic-cultural, religious, and civilization aspects nations, and history of their introduction into Russian civilization is extremely complex and contradictious. As a result, an importance of developing research of spacial-temporal peculiarities of ethnic-cultural relations within the region is great.

In a sub-latitude direction a mirror symmetry is registered in alterations of the index of ethnic mosaic. In flat regions of Pre-Caucasus a growth in the index of ethnic mosaic goes from west to east, and in mountainous area it goes from east to west. A limited number of nations remains relatively homogenous in their ethnics. In flat areas they include administrative districts of Krasnodar region within Azov-Kuban plain, and also laying by western territories of Stavropol region. The second aerial of relatively homogenous in ethnic aspect regions is registered in mountainous territories of North-Caucasus republics, including Inner Dagestan, Chechnya republic, Republic of North Ossetia - Alania, and, in a slighter degree, eastern regions of Karachaevo-Cherkessia (Karachaevskiy and Malokarachayevskiy districts) and western territories of Kabardino-Balkaria (Zolsk and Baksansk districs).

Stationed highly-expressed ECZ that preserve their state from the begginning of the XX century formed at coasts of Black and Kaspian seas. The widest line of ECZ has sub-latitude spread, it has stretched along pre-mountainous plains from Taman peninsula to Primorsk lowland of Kaspian sea. Also, two curves of ECZ of sub-meridian direction. The basis of the first of them, the most powerful one, are Ingushetiya and Prigorniy district of North Osetiya, it continues to the middle flow of Terek, on Tersko-Kumskaya lowland, further it stretches and gradually fades in North-West direction, along the axis of Kumo-Manychskaya hollow. In the basis of the second curve lay western territories of Karachayevo-Cherkessiya, south-eastern territories of Krasnodar region and Adygeya republic. Most of districts of Stavropol region within Stavropol hight and separate lacunes in the grid of highly-expressed ECZ (for example, Nogayskiy region of Republic of Dagestan of Labinsk district of Krasnodar region).

Complex picture of ECZ has a long development history and reflects peculiarities of ethnic structure of a region and its dynamics. Specificity of their formation and peculiarities of their structure can be described on foundations of typological analysis (table). Two types and sub-types of ECZ are outlined in North Caucasus according to a degree of ethnic-cultural closeness of elements: (1a) strictly complimentary and (1b) relatively complimentary; (2a) strictly contrast and (2b) relatively contrast. ECZ of the first type are formed on foundations of confessionally- and historically-close ethnoses and sub-ethnoses, and the first sub-type (1a) is represented by ECZ that consist of close-relative ethnoses, for example, the Slavian and the Adyg, and the second one consisits of confessionally-, historically- close ethnoses, for example, Slavian nations and the Osetian, or unnative christian nations (the Germans, the Greek, the Amenian, etc).

Strictly contrast ECZs from during the process of interaction between ethnoses and polar civilization and ethnic-cultural systems that aren´t related in territory or history (for example, Tersk cossacks and the Kabardian). The contrast degree of an ECZ is also affected by a character of development of ethnic-cultural interaction (good neighbourly or conflicting).

According to dynamic peculiarities and evolution direction of ECZ we can outline three types of them - stationed, dynamic, and historical. Stationed ECZ are characterized by a significant existence duration and do not suffer great structural alterations. Depending on structure stability degree and functioning of stationed ECZ two sub-types are outlined: stable and unstable. Dynamical ECZ, depending on their development direction, can be divided into divergent and convergent, in other words, evolving either towards the strengthening of expression, or its decrease. Historical ECZ are ethnic-cultural formations that proved their development as ECZ during the development of Russian civilization in Northern Caucasus. It is important to point out that, during its development, an ECZ can transfer from one typological group into another under the impact of a complex of inner and outer factors.

Typology of ECZ of North Caucasus

The work is submitted to the Scientific International Conference «Man and the noosphere. The scientific legacy of Vernadsky. The global problems of modern civilization», UAE (Dubai), 16-23, October, 2012, сame to the editorial office оn 12.05.2012.