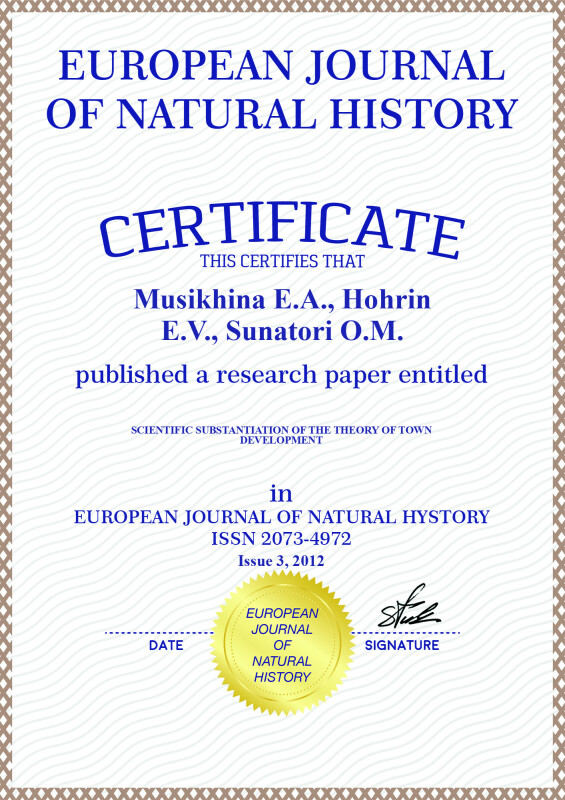 SCIENTIFIC SUBSTANTIATION OF THE THEORY OF TOWN DEVELOPMENT

Today, the city became the main place of human habitation. In general, Russia´s cities and towns have approximately 70% of country population. Urban system is a complex system of semistructured socio-economic system with lots of forward and backward non-linear relations. City, a particular spatial environment, emerging in the development of society, and is one of the highest manifestations of human civilization. Urban settlement, which arose originally as a specific kind of environment opposed to the environment, embodies the enduring values ​​and the unique experience of human culture. It is characterized by high compactness, density of development, communication, and a saturation concentration of resources, which allows to co-exist and cooperate effectively to a large number of people.

In modern conditions, social and economic development of cities is an important strategic component of the municipal government, along with administrative and legal regulation and fiscal policy. The main functions of the socio-economic forecasting and analysis are integrated urban development, the formation of a consolidated development plan with the preparation of long-term and short-term plans for the development of territories. Establishing the strategy for socio-economic development, decision-making at the level of municipal government, requires information and analytical support in the form of an information system of decision-making, the central component of which is system modeling of urban areas.

It is important to perform analysis and modeling of urban systems according to their characteristics, as the city is:

Methodological basis for modeling the socio-economic development of cities is a system analysis with central point to build a single model of development of territories, which reflects the critical factors and interrelations of the real system [1]. In practice, means the creation of complex models with strong dynamic links and information between models at all levels. It must be remembered that the city as an object model is characterized by: the weakness of theoretical knowledge (lack of a unified theory of the city) the qualitative characteristics of knowledge about the system (the control problem are semi-structured), a high level of uncertainty of initial information.

The theory of the city as an abstract conceptual tool whose main purpose is to explain the processes and phenomena should be based on three rules of conformity models, elements and their relationships [2]:

The problem of urban development has always interested researchers, in particular, J. Forrester in the early 70´s built a simulation model of the evolution of a typical American city. His followers consider the model of urban-based optimization approach. However, the scope of such models is limited to the solution of particular problems of urban areas.

The technological approach to the construction of models of urban systems based on the representation of models of resource types. With this approach, the state of the urban economic system is described by variables. External influences and management decisions that determine the dynamics of the simulated system, are constants. The main target in this task is to establish a balance of resource use in the system. These models are «hard» and as optimization models, describe only the special cases of urban development.

As a method for simulation of urban areas it is advisable to use a model of system dynamics, since it allows to simulate the dynamic processes at the highest level, in terms of the functioning of a dynamic system as a combination of cash, product, human and other streams. Therefore, subject to the following three types of compliance:

Lack of tools for analysis of urban areas, in particular, no single technology integrated environmental assessment, leads to a number of geo-ecological problems. In the long process of the formation of towns natural environment undergoes constant changes under the influence of anthropogenic factors, the main ones are:

Occurring in the early stages of development in the main agricultural areas, lead to changes in soil structure and water balance, to the weakening of fixation of soils that are already fraught with gully erosion. With the expansion of the area of ​​human impact disrupted the natural drainage. When moving large amounts of soil compaction and subsidence occur, and the surface deformation with the formation of gaps, cracks and craters. When routing communication there are conditions for the development of subsidence and suffusion processes. During the construction of linear structures (roads and railways), a change in the structure of watersheds. During the construction of reservoirs, hydro-geological environment is undergoing fundamental changes: flooding of the former rock vadose zone, the formation of new and increased capacity of existing aquifers, development of the backwater, which leads to the development of a bypass filtration, which, in turn, causes an increase in water level and flooding of the area developments.

Consequently, the urban ecosystem, as a long-term, should be designed and developed taking into account the integrated environmental assessment. Such an assessment is needed as a basis for the harmonious development of regions, without environmental degradation.