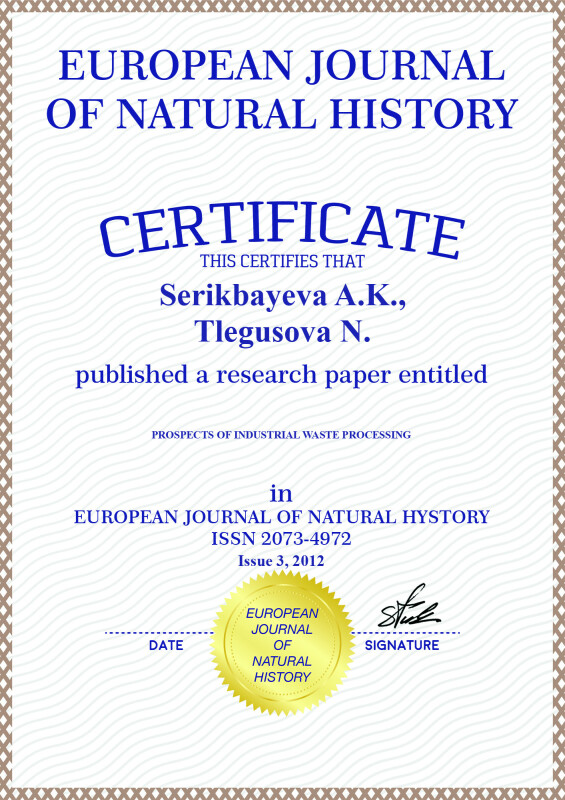 The science and engineering of the beginning of the third millennium develop at rates of a geometrical progression, the industry isn´t an exception and it is as one of the most large-scale fields of a man´s activity. This kind of tendency extended the worldwide. Due to the technological processes the industry influences negatively on the environment, the industrial wastes as a component of this influence. Annually around the world and in our country billion tons of a hard, paste like, liquid, gaseous wastes are exuded in the biosphere. They cause irreparable damage both to the living nature, and the lifeless nature. Despite of prescription and a large number of researches in the field of non-polluting production, the problem of utilization and processing of industrial wastes remain still actually

The purpose of this work is to consider the structure and perspective ways of industrial waste processing of copper production of Kazakhstan.

Industrial wastes of copper production differ with the content of valuable metals, as osmium and rhenium. Rare metals have no own raw sources, and they are taken from the industrial wastes of production of non-ferrous metals. The main sources of receiving rhenium in Kazakhstan are sulphidic copper ores. In pyrometallurgical processes rhenium and osmium, generally changes into metallurgical gases. At dry and wet purification of gases they are distributed between dust, washing sulfuric acid and lead slime of copper production.

In the table, the chemical compound of the slime and dust, formed in copper production are presented.

You can see that this two technogenic wastes of copper production generally consists of compounds of lead.

The dust has much more zinc, than the slime. The dust respectively contains 4 and 200 g/t gvaluable metals, osmium and rhenium, and the slime contains much more and 50 and 800 g/t. Including these materials contain toxic elements as mercury and arsenic. If the dust contains up to 1% of cadmium and arsenic, the slime contains also about 1%. These data testify requisite development of complex technology of copper waste processing of technogenic production with extraction of valuable components and utilization of toxic metals with less toxic connections. Such decision is important in the point of ecological and economic view.

In the dust the lead is in the basic oxide form. Metallurgical dust and slime were earlier processed at the Chimkent lead plant for receiving lead and rhenium, zinc, cadmium and indium. Thus there wasn´t considered extraction of the most valuable metal of osmium. However, the rhenium extraction in sulphate solutions didn´t exceed 15% from the contents of the initial dust. Such low extraction is caused that rhenium in a sulphidic product substantially is at a type of connections with the lowest extents of oxidation (II, III) which in the lixiviation remain with insoluble connections. Besides, in the course of sulphatizing burning significant amount of rhenium turned into a gas phase caught with the solutions of washing towers. So the gas of sulphatizing burning was an extra source of rhenium. Therefore it is necessary development of technology considering complex processing dusts with passing extraction of osmium and rhenium.

The results of X-ray phase showed that lead slime represents a monophase of lead sulfate for 80-85%. In a small amount lead is presented in sulphidic and oxide forms. It is difficult to find form of rhenium and osmium in the slime because of their small concentration. Phase structure of the slime are the following%: 86,8-96,7 PbSO4; 0,08-0,4 PbS; 2,4-13,8 PbO.

We develop technology of reception of an osmium concentrate from sulphuric acid lead slime, including low-temperature sintering and hydrometallurgical processing.

Realization preliminary low-temperature sintering is based on physical and chemical properties of osmium and rhenium, and also nonferrous metals and can be considered as one of the variants, allowing to separate one group of sulfides of metals from another.

For lead slime processing were carried out the sintering with a sodium carbonate and sulfate and coke, with the subsequent lixiviation of the received products.

At tests of these options the temperature of burning changed 750-900°С. The addition a sodium carbonate and sodium sulfate into the charge contained 20-35%, coke of 5-15% from quantity used slime. Duration was 1-3 hours.

The results of experiments proved that the extractions of valuable content from the lead slime were rather higher in sulphidizing sintering.

The best results was the addition of 30% sodium sulfate, 10% coke into the charge in the 800°C temperature and the duration was 2 hours.

The thermogravimetric analysis of Na2SO4-C slime system proved that in sulphidizing (800°С) eutectic mixture formed with the Na2S-Na2SO4 and Na2S·MeS which intensify the formation of sulphide and resumption of osmium.

Making of sulphidizing sintering is one of options allowing to separate one group of sulphides metals from another, and was based on physical chemical properties of sulfides and tiosoly non-ferrous, rare metals. And in our opinion it will allow to reduce considerably volume of processed solutions at the subsequent vatting [3].

The result of electron-micrograph analysis it is revealed, that osmium forms metal and dioxide forms, and rhenium is in the form of disulfide, which are established by element structure of a phase and on density of distribution in it
of elements [4].

Thus, the technology of processing lead slime with reception the osmium-, rheniumconsis concentrate in which 100-120 and 60-100 multiple enrichment of osmium and rhenium is reached is developed. The sulphidizing sintering of lead materials with the further lixiviation allows to divide heavy non-ferrous, rare and precious metals into separate quite easily processed concentrates
and solutions.

The work is submitted to the Scientific International Conference «Innovative Technology in Higher and Vocational Education», Spain (Costa del Azaar), August, 2-9, 2012, came to the editorial office on 05.06.2012.