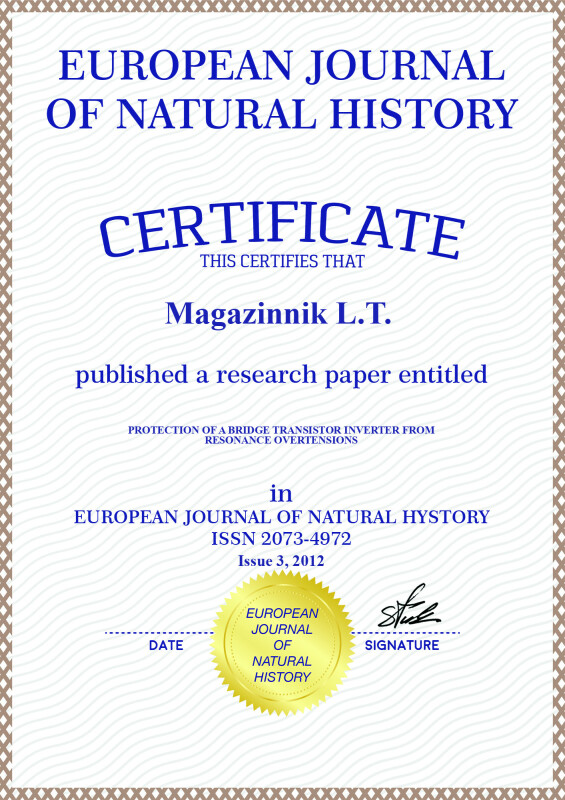 PROTECTION OF A BRIDGE TRANSISTOR INVERTER FROM RESONANCE OVERTENSIONS

Article in PDF
214 KB
The article describes an innovative way of transistor inverter protection which enables to easily and efficiently suppress resonance overvoltage in single-phase bridge inverters with condensers in a circuit of primary transformer winding.

We know transistor single-phase bridge inverters containing a transistors bridge shunted by an inverse diode bridge and connected to a network rectifier via a direct current diagonal and to loading [1, 2] via an alternating current diagonal in a power circuit.

To eliminate a constant component in the diagonal loading a condenser is built in series with the loading. However, in most cases a secondary winding of a transformer is the loading of a transistor bridge, that is the loading is of an active-inductive character and it may result in a voltage resonace in a series L-C circuit. A unipolar transistor key has been applied to eliminate resonance overvoltage. The principle of the device is illustrated in Fig. 1, where the scheme of a single-phase transistor inverter is shown and in Fig. 2 which represents a unipolar transistors key.

Unipolar transistors key 13 (Fig. 2) contains phototransistor 22, a collection circuit of which is built in into diode bridge direct current diagonal 23, 24, 25, 26 and is connected to common anodes of a diode bridge via an emitter, and to common cathodes via a collector. The alternating current diagonal of diode bridge 23, 24, 25, 25 is built in between the condenser 11 connecting point with primaly winding 9 of transformer (Fig. 1 and 2) and the common point of additional inverse diode 19, 20. A photodiode of phototransistor 22, connected with an optalectronic pair and with a minus of a network rectifier via a cathode is an controlling input of unipolar key.

The device operates as follows. The diagonal pairs of inverter transistors 1-4 and 2-3 are switched on in turn and the duration of their on and off state, i.e. pulse-width modulation is set by control system 21. When one diagonal pair is on (e.g. 1-4), transistor 1 shunts the circuit of optopair photodiode 14, and the lafter does not condact the current. Accordingly, the signal at the controlling input of transistor key 13 is zero and the transistor represented in Fig.1 as a contact is locked (the contact is open). The complete scheme of a unipolar transistor key 13 is presented in Fig. 2. It is cleary seen that if a photodiode of optoelectronic pair 14 does not conduct the current, photodiode 22 of a phototransister of the same name and a phototransistor is locked. Accordingly diode bridge 23, 24, 25, 26 is also loced. The current between the connecting point of condenser 11 with primary winding 9 of a transformer (see Fig. 1 and 2) and the common point of additional inverse diodes 19, 20 can flow in no direction . A similar situation arises when another transistor diagonal pair 2-3 is built in: a photodiode of optoelectronic pair 15 is shunted by transistor 2, a photodiode of the same name conduct no current, a photodiode of phototransistor 22 is not lit, diode bridge 23, 24, 25, 26, is locked. Only during the pause when transistor diagonal pairs 1-4 and 2-3 are switched over, transistors 1 and 2 of different diagonal pairs are locked, accordingly, two photodiodes of optoelectronic pairs 14 and 15 «are lit» - the photodiodes of both optoelectronic pairs conduct the current, photodiodes 22 of the phototransistor of the same name is lit, diode bridge 23, 24, 25, 26, is un locked, the circuit between the connection point of condenser 11 with transformer winding 9 and the common point of additional inverse diodes 19, 20. If the voltage at condenser facing or at transformer primary winding 9 outputs exceeds the inverter supply voltage, I, e. the network rectifier voltage, a discharge of condenser 11 up to the value of a network rectifier voltage or a discharge of excessive electromagnetic energy of a transformer primary winding takes place or these processes occur simultaneously, and unipolarity of transistors key 22-26 (Fig. 2) provides the flow of a discharge current in two directions.

It is necessary to note that the scheme in Fig. 2 represents a special case of unipolar transistor key realization, i.e. one of the possible variants .

A unipolar key, for example can be implemented in two back-to-parallel connected transistors.

Thus, the proposed device allows us to remove resonance overvoltages in single-phase bridge inverters with a condenser in the transformer primary winding circuit simply and effectively and, simultaneously, get rid of an additional winding complicating the construction of a transformer.