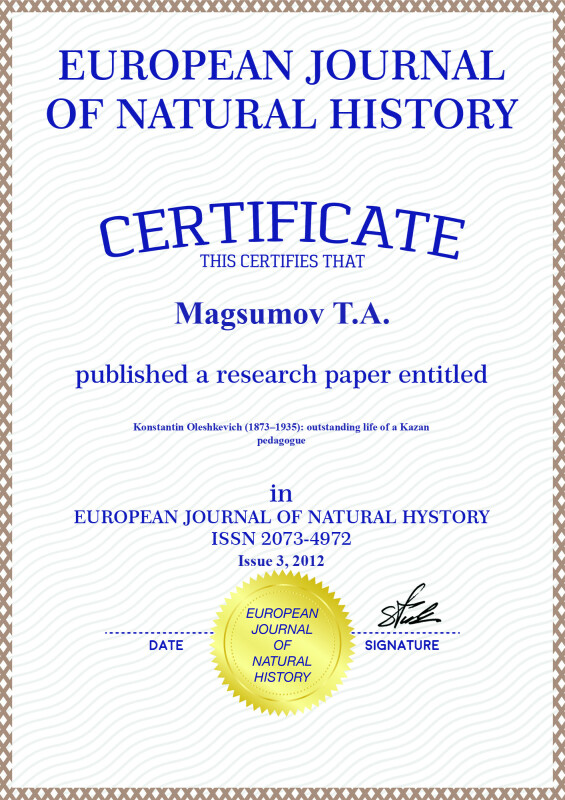 Activity of some pedagogues was significant and fruitful for the development of Kazan industrial college (KIC). Among such people, we think, professor Konstantin Savvinovich Oleshkevich occupies an important place. K.S. Oleshkevich was born in noble family in the city of Vilnus, graduated from Vilenskoe real college and Institute of civil engineers in Sankt-Peterburg in 1897. Then he was defined to serve in the Ministry of inner affairs, stood as a grant holder of the Ministry of national enlightenment from the 1st of January till the 1st of July 1899, and, at the same time, being on a foreign business trip, studied organization of training process in secondary professional educational institutions. On his return, by an order of the governor of Kazan educational district, he was assigned as a tutor of building science and manager of training part of lower building-technical college that was a part of Kazan Pedagogic University, and from the 28th of August 1900 he was transferred to the position of tutor of building science and drawing of a secondary chemical-technical college, remaining the manager of educational part of lower building-technical college (he occupied the position till 1904) [5, l. 3]. Before K.S. Oleshkevich, as before all other pedagogues of the college, a difficult problem of organizing educational process arose, and it was complicated by the lack of training books and programmes. In order to overcome these difficulties, he developed a programme of the main course «Construction works and materials», and, with help of the tutor of the mechanical college Andreyev, he prepared programmes on drawing, norms of productive practice, etc., staying the only tutor of building specialties in the college. He also had to develop a registry of necessary subjects. Konstantin Oleshkevich lived in a government flat by the industrial college, regardless of the fact that in 1900-1903 he was the city architect of Kazan, and in 1901-1903 he was the architect of Kazan principle land board. The architect obtained his own house (now on 33 Mushtari st.) only in 1915, by the time when he had already built much in the city, and during soviet times the house was confiscated, and a children´s home was allocated there [3, p. 42].

Konstantin Savvinovich was quite noticeable and interesting man; local press frequently called his name regarding some scandals and curious situations [2, 6, 7]. The most scandalous event took place in 1906 when he performed an execution for the future classic of soviet literature A.N. Tolstoy (1882(3) - 1945) [1, p. 364]. In the end of 1905 Alexey Nikolayevich, undergraduate of Petersburg technological institute came to Kazan with his young wife and son to his relatives. Families of Tolstoy and Oleshkevich became close and often spent time together. Alexey Nikolayevich, obviously, offended Konstantin Savvinovich somehow (as angry tongues say: «cherche la famme»). K.S. Oleshkevich invited A.N. Tolstoy to his place and, pointing a revolver at him, struck the future author of world-known masterpieces with a whip. Tolstoy paid the debt and on the next day he caught K.S. Oleshkevich when he was going to work in a carriage and gave him a lashing with a whip as well. However, being aware of a violent temper of his enemy and afraid of further mutual beatings, future academician of SA USSR hastily left Kazan without even taking his wife and child.

From the 7th of November 1906 and till 1917 he returned to managing training part of the building college. The second stage of his social-pedagogic activity started. At the same time in 1910-1911 he was a temporary Kazan city architect, in 1911-1913 he was a temporary technician of Kazan city board, in 1917 he was an the architect of powder plant. Besides, in 1909-1912 he was the speaker of Kazan city duma, and from the 1st of August 1911 he was the trustee of arbitrators of Kazan arbitrage [3, p. 42]. After events of October 1917 K.S. Oleshkevich replaced V.I. Nechkin in his position, becoming the head of Presidium of Kazan industrial, economic, and artistic technical college [4, l.68]. In 1920-ies he trained in Kazan politechnical institute, from 1922 he was the dean of architectural faculty. In 1931 Oleshkevich was defines as a regional architect of Kazan. According to his projects, besides the building of industrial college (1899), house of S.A. Chukasheva (1908), Shamovskaya hospital (1910), and others were built. He worked in modern direction. Such is a short biography of an outstanding man, talented architect, successful official, scientist Konstantin Oleshkevich, whose lifeline was closely entwined with the history of Kazan professional school.

The work is submitted to the Scientific International Conference «Research on the priority of higher education on-directions of science and technology, on board the cruise ship «MSC Magnifica» «Around Europe», 22 May-2 June 2012, came to the editorial office оn 09.04.2012.