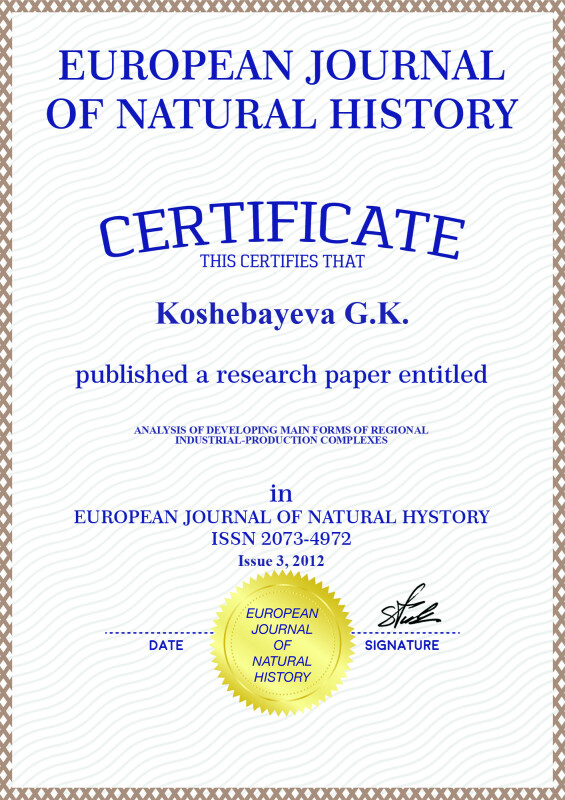 At the present stage of developing the world economy there takes place a significant revaluation of the most important trends of the regional economic development. In this connection, alongside with the common for a separate state strategic aims and tasks, there are developed and solved the problems conditioned by the characteristic features of the regions development, and the regional and common state aims must naturally effect the growth of the region population wellbeing.

The process of forming regional industrial-production complexes which has begun in the economy of Kazakhstan requires a scientific theoretical-and-methodological substantiation of their forming expediency taking into consideration the priorities of the national economy development, the state economic interests and the functioning integrated structures.

The present day tendencies of the development of Kazakhstan pose new requirements to the organization of the national industry managing, dictate the necessity of its timely reforming and modernizing with the aim of achieving its competitiveness.

The most efficient from the economic point of view is such a form of production-territorial formations, as industrial-production complexes (IPC). The analysis of home and foreign literature on this issue allows to separate various definitions of industrial-production complexes. All these definitions can be divided into three groups in which there are considered enterprises, or branches, or separate kinds of activities as the forming elements.

The first group of definitions is based on every region provision with their own fuel-and-energy, metallurgical and machine building base, building materials, production of wood and food industries, as well as the presence of corresponding enterprises on its territory. So, under a territorial-production complex there is understood a totality of uniform, closely interconnected «elementary technical-economic units» (enterprises located on a compact territory) [1].

The other group consists of definitions in which an industrial complex is considered depending on the territory covering or as a combination of industrial branches within the limits of economic regions [2], or as a totality of branches and productions in economic regions, in industrial junctions and centers [3], or an interaction between enterprises in economic regions of different levels [4]. А.Ye. Probst, starting from the efficiency of locating interconnected enterprises on the same territory, limits production complexes with cities or even with grounds in their boundaries and calls them «territorial-industrial complexes of the center» [5]. An original by its content definition of an industrial complex belonging to this group was given by N.N. Kolosovski: «Mutually conditioned combination of organically connected branches on a certain territory in accordance with its economic and natural resources features ensuring a needed economic result, i.e. obtaining a preset amount of production with minimal costs» [6].

The main content of the abovementioned definitions comes to the following: in the first case an industrial-production complex is oriented to the region self-sufficiency, in the second case -to achieving an optimal economic effect, in the third one - to the interconnection. Nevertheless, by joining the main propositions of each definition we can achieve an optimal understanding of industrial complex organization. The main indicators characterizing an industrial-production complex as a complicated territorial formation serve the following [8]:

An industrial-production complex can be defined as an interconnected and mutually conditioned combination of organically connected enterprises (and productions) on a certain territory, in accordance with its economic and natural conditions and transport-geographical location, comprising a part of the economic complex of the whole country or some economic region and ensuring the achieving of maximum economic effect, i.e. obtaining a needed production amount with minimum costs.

The present day structure of Kazakhstan economy was formed in the conditions of the USSR mainly based on practical realization of the theory of territorial-production complexes (TPC) which were an instrument of centralized planning in regions. In the 20-s the term «TPC» was identified with an economic region: «an economic region is a territorial-production complex ensuring the most complete and rational use of natural and human resources of the region» [9].

As far as complicating the territorial-production structure of the USSR economy there appeared a necessity to divide the existing economic regions into subregions for the more accurate planning of the regions development. An economic subregion began to be defined as a primary TPC, i.e. there took place the transfer of the TPC concept to a lower taxonomic unit [10].

Methodology of the territorial-production complex theory developed by N.N. Kolosovski and other soviet scientists is similar to the methodology of cluster theory by M. Porter which has net been used for long in our country.

According to N.N. Kolosovski, the basis of regionalization is designing regional territorial-production complexes which were understood as organized in certain technical forms social human labor with its power and machine equipping, applied to a certain favorable for the given specialization combination of natural resources. These production-territorial complexes were considered to be the basis of regionalization [11].

The ideas of typification production processes initialized the development of a conception of territorial-production complexes (TPC) which later on were widely used both as a method of analyzing and a category of planning, and as a form of the production territorial organization. In spite of that TPC managing was carried out by planning-and-administrative methods, there was practically no competitiveness, and the efficiency was defined by minimizing the reduced costs and the term of capital investments recoupment, there was accumulated a positive experience to develop vertical and horizontal cooperation relations, complex use of raw materials, cultivating new territories.

Changes in the country economy structure which are mainly defined by the influence of political factors led to the corresponding modernized approaches in forming and managing territorial-production complexes. These changes connected with the differences in TPC management a permit to state the following:

Consequently, present day conditions of the regional economy dictate the necessity to revise and change the existing principles and methods of managing such complexes. TPC management must be oriented to forming and developing integration processes which permit to ensure the complexity of satisfying the growing demands of economic subjects of a region. The integration of enterprises must be based on the principles of economic motivation of enterprises which consist in that enterprises functioning within the limits of TPC allow them to extract a larger economic effect than their independent development.

Now we can analyze similarities and differences between industrial-production complexes and clusters, as at first sight we can come to the conclusion that the conception of clusters repe4ats the basis propositions of IPC and is its copy. However, on closer examination it becomes clear that such a conclusion is incorrect. The conception of clusters does not copy the conception of IPC, they do not contradict to each other but can exist in parallel. We can accept V.Yu. Malov´s opinion that a cluster by the set of objects can correspond to a TPC, but it is characteristic of the period after TPC forming, when on the given territory there will be no new large structural transformations that require studying material-substantial proportions [9, p. 11]. One of the differences is clusters and IPC location. Clusters usually form in old-assimilated densely populated regions and especially often in the limits of agglomerations. In one city there can form several clusters. The IPC models can be mainly used for the regions of new assimilation with low density of population and not simple natural conditions. Besides, the structure and specialization of clusters and TPC are different. A cluster is an aggregation of contacting with each other independent companies working in one industry or subindustry. In the cluster structure there are also state and often educational or/and research organizations, there is a controlling body. An IPC is an interbranch complex in which the main role is played by the branches of the basic group defining the IPC main specialization, as well as there develop complex-forming branches. Clusters and IPX specialization is the next parameter by which these conception differ. Clusters develop mainly in new highly technological industries, sphere of services or in the traditional industries oriented to the consumers. An IPC is characterized by the presence of mining, metallurgical, chemical industries and machine building oriented to the manufacturers [12].

In connection with various approaches to the terminology there arises a necessity to streamline them. With this aim all the forms of organizing regional complexes can be grouped in such a way:

The internal relations reflecting the local differences in economic and natural-climatic conditions, specificity of the industry structure, are used as one of the main economic-geographical aspects of any IPC. Alongside with this, studying IPC is incorrect without revealing the external relations assisting the substantiation of the production specialization trend with the aim of defining the place taken by each of them in the total system of the regional labor division.

The relations inside the IPC, even if limited by the relations of just production character, are very diverse and differ by a wide branching. They appear under the influence of using raw materials, fuel, electric and heat power, various materials, machines and equipment, semi-finished products, ready products, they spread over the general servicing units (transport, power, communal and other facilities), over human resources, etc. Their highest expression serves such forms of industry organization, as combining and cooperating.

Thus, the process of complex-forming can take place both within the limits of a large territory (economic-geographical region) and within the limits of a limited territory (administrative-territorial unit) - local complexes. Due to the mutually conditioned combination of productions there can be ensured the production economic efficiency by the way of reducing transport costs, more complete and complex using of the raw materials and auxiliary materials, rational use of local natural and social-economic conditions.

Industrial groups where enterprises are connected between each other by the common transport-geographical location and the common use of the same servicing units, under known circumstances serve a step which is transit to industrial complexes. In an IPC there can be included in some cases the productions which are left from the old time if they are organically connected with the common principles of the production-territorial combination, and those which have just appeared and haven´t yet had time to merge organically with the other productions but have all the necessary preconditions for this.

Regional industrial-production complexes are exclusively diverse. The individual characteristics meaning, from the point of view of industrial complexes typology is different. Some of them are the main ones, the other play an auxiliary role.

The largest interest for typological aims there presents the analysis of specialization, structure, and territorial organization of the production. They are the main aspects in the economic-geographical studying of any production-territorial combinations
in industry.

Of the decisive importance among all the indicators which can be basic for the IPC typology there are, of course, characteristic features of the production specialization and structure. With their help it can be possible to define the functions performed by the given complex, its role in the common system of the labor territorial division inside the country, and the character of the mutually connected enterprises combination that occurred under the influence of such and such factors.