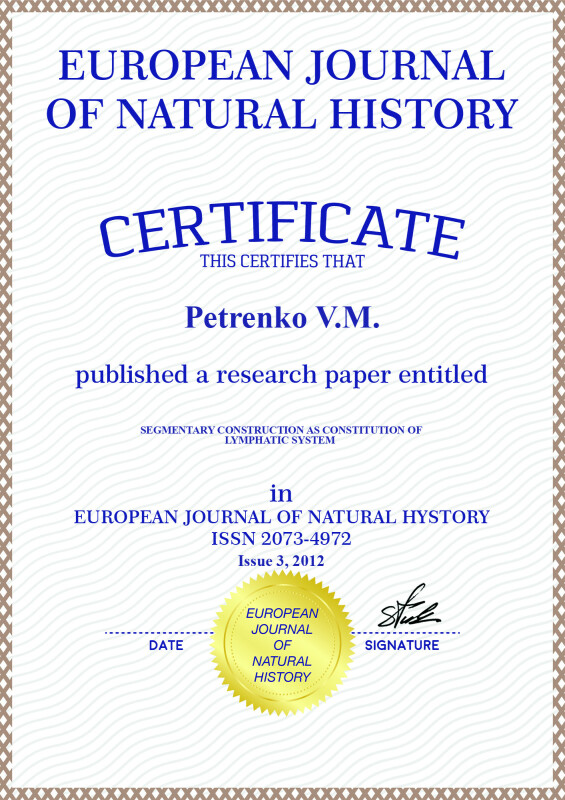 Article in PDF
269 KB
Lymphatic system consists of segments of two types – general (systemic or periarterial) and special (own, local or intervalvar). The segments organize all reactions of the system on influences of its environment including pushes of lymph flow.

It is known many facts about structure of lymphatic system (LSy) in man and animals [2, 5, 6]. It is proposed mush models of function of LSy as part of cardiovascular system, but mainly of lymphatic vessels (LV) - lymphatic hearts by L. Ranvier or lymphangions as valvar segments, functional units of LV according E. Horstmann and H. Mislin [1, 4, 6]. These models characterize organization of LSy in different aspects, but generally accepted conception about organization of LSy at whole is absent. In this article I want to point on common in structure of all sections of lymphatic bed (LB) independently from their regional and organic belonging, in order to establish the main principle of general construction of LSy in mammals.

Topographico-genetic features of LB. LV and lymph nodes (LN) usually lie about blood vessels. And this is not accidentally. Primary veins always accompany arteries of embryo, part of its veins are turned off blood flow with formation of primary LV. Blood vessels invaginate in lumen of these LV with anlage LN in fetuses. External wall of marginal sinus in anlage of LN (wall of maternal LV) transformates into capsule of LN (~ wall of definitive LV), internal wall of marginal sinus of LN is infiltrated by lymphocytes, which migrate from blood microvessels of stromal anlage of LN (invagination in lumen of maternal LV) [5]. Arteries with the most high blood pressure, the most thick and compact walls among all vessels:

Definitive microcirculatory bed, as primary vascular bed in early embryos, has netform architecture, comparatively thin, gentle differentiative walls. Most large, magistral arteriolae and venulae, their branches and tributaries divide mesentery on microdistricts of microcirculatory bed. Terminal artetriolae come off outline of the microdistricts. Their outline vascular bundles include LV of I order. The LV lie offer on their outlying area, at one or both sides from magistral venulae, аnd lymphatic capillaries - on the outside of balls of blood capillaries. Lymphatic capillaries fuse into lymphatic postcapillaries, which move towards the outline vascular bundle of the microdistrict, offer along collective venulae. LB has similar construction in organs with multilayers structure. Thus all LB, beginning from its roots, lie collaterally to the blood vessels. In definitive microcirculatory bed LV accompany offer venulae as in anlage of LB in embryo.

After bounds of organs large LV more and offer are orientated on aorta and its branches: thoracic duct and its roots, lumbar trunks, pass along descending aorta, vascular bundles of all main parts (regions) of human or animal body and to all organs form about aortic branches and their branchings. That construction of cardiovascular system, and LSy as its part, originates already in embryos (Fig. 1): branches of dorsal aorta grow to somites, adjoining parts (segments) of neural and intestinal tubes, their derivatives; drainage vessels, venous and lymphatic, are orientated on these branches of arterial tree.

Morfogenetic folding adaptation of LB - formation of valves: periodic knocks against of lymph anti-flows cause repeated local lymphodinamic strokes and overstreching of walls of LB, arising and increasing of their residual deformations with look as circular folds [6]. Valves limit lymph flow back and thus prevent destructive lymphodinamic strokes. As long ago as XIX centure A.Haller observes rythmical contractions of segments of LV between neighbouring valves and voices supposition, that such segments present lymph pumps. At this time L. Ranvier describes lymph hearts in LV of mammals. According E. Horstmann a. H. Mislin, they are valvar segments or lymphangions, functional units of LV: distal valve limits lymph flow back, more proximal muscular cuff supports direct lymph flow. I think, that lymphangions are intervalvar segments of LV, which include both neighbouring valves of the segment, entrance and exit, because lymphangions function only with participation of both their neighbouring valves (Webb R, 1932) [6], as industrial pump. What is more, LB has segmentary construction on all extent.

LSy may be present as chain of intervalvar segments. Their construction become complicated progressively in orthograd direction (Fig. 2): the endothelium of lymphatic capillary are supplemented by its folds (valves) and adventitia in the walls of lymphatic postcapillary, smooth myocyties - in the walls of LV, lymphoid tissue - in the walls of LN. This hierarchy in structure of definitive LSy recapitulares the main stages of development of LSy with connection with organogenesis (growth of functional loading on LB) in evolution and ontogenesis of vertebrates. Thus human thoracic duct:

LN is part of uninterrupted lymphatic tract: walls and lumen of afferent LV pass into capsule and sinuses of LN, which continue into walls and lumen of efferent LV. Their muscular layers interconnected too. LN is one of lymphangions in network of extraorganic LB. On structure and function capsule of LN is muscular cuff of nodal lymphangion, in connective tissue of which lymphocyties instil [6]. As in evolution of vertebrates, so in ontogenesis of man and mammal animals LN form at last among all sections of LB, on the base of LV, but with participation of arteries and veins, which invaginate in lumen of LV. Then it is originated lymphoid parenchyma of LN as local transformation of the wall of maternal LV (Fig. 3): monocytes (→ macropfages) and lymphocytes pass from blood microvessels of the invagination (stromal anlage of LN) into its intervascular connective tissue which grow up as lymphoid tissue into lumen of the LV [5].

Fig. 3. Anlage of lymph node (ALN - scheme): a,v - artery and vein, they invaginate into lumen of lymphatic vessel, which divides on three segments, ALV, ELV and PSLN - afferent and efferent lymphatic vessels and primary marginal sinus of lymph node. PSLN is local narrowing of lumen of maternal lymphatic vessel in its part, where invagination of its wall with a,v (stromal ALN) grow up and transformate into ALN with lymphoid tissue

Classification of segments of LSy. Segmentary organization of all LB is defined as structure of its walls (valves), so its topography (branching artery). Therefore I divide all segments of LSy on two groups:

1) general (common for LB and blood bed) or systemic;

I discern two types of general, periarterial segments of LSy:

1) central, paraaortic (lymphatic ducts and their parts and roots);

2а) regional or topographo-anatomical (usually about primary branches of aorta);

2b) organic, anatomical or subnodal (near the organ, in basin of its regional LN of I order);

Integration of segments of LSy. The own segments of LSy unite with another components of general segments of LSy (and corresponding neuro-vascular segments of body at whole) by means of loose connective tissue, which may be transformates into lymphoid tissue in LN. In the walls of LB it may be distinguish own or segmentary apparatus (intervalvar segments) and oversegmentary apparatus of bipartite connections with surrounding tissues. The own apparatus includes inner layers of LB wall: in lymphatic capillaries and postcapillaries - endothelium, in LV and LN - intima (including lymphoid tissue in LN) and media. The intervalvar segments of LV and LN are surrounded by common case of uninterrupted adventitia. Connective tissue fibers entwine in superficial layers of LB adventitia uniting wall of LB with surrounding tissues and organs - mechanic drives of external cuff of tissue (extralymphatic) pump.

Constitution or general construction LSy, which determines its reactions on all influences of surroundings including pushes of lymph flow, is in the segmentary construction of all parts and sections of LSy. Its organization includes folding structure of LB walls, causing by fluctuations of lymph flow [6], and quasi-segmentary connection of LB with arteries. Topographo-anatomical segmentation of LB arises in embryos [5] and reflects external connections LB with its surroundings - source of extravasal factors of lymph flow. Functional, intervalvar segmentation of LB arises in fetuses and corresponds to impulsed lymphization in organs and partial lymph flow out organs, that causing cyclic organization of vital activity of cells and tissues. In condition of deficit of own lymph flow energy LB intervalvar segments organize passive and supplementary active moving of lymph from organs to veins. Structure and regimen of function of LB intervalvar segments are determined by their topography: at each level of general segmentation, branching of the main artery of systemic segment LB is divided on intervalvar segments with different construction of their walls. It corresponds to fluctuations of functional activity of surroundings: the metabolic activity of draining organs (lymphization as piston of tissue pump) and mechanic pressure of adjacent organs (external cuff of tissue pump).