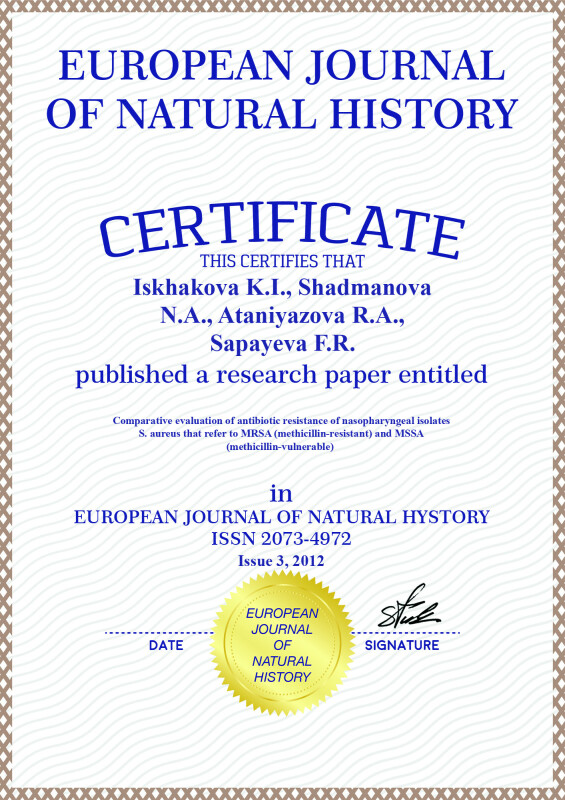 Methods and materials. In 3 years (2004-2006) 9531 people from medical personnel of different treatment-prophylactic institutions (TPI) of surgery profile of the city of Ugrench of Khoremskaya region were inspected for nasopharyngeal bearing of S. aures. Data of 5329 persons who were outside clinic environment (healthy pregnant women on their initial appeal for consultation) served as a control. Discharge and identification of staphylococcus was carried out via general methods [4]. Disc-diffusion method with usage of Muller-Hinton environment and commercial discs with antibiotics (HIMEDIA, India, Russia) was used to define antibiotic resistance. Discs with oxacillin with load of 1mkg per 1 disc were used to reveal MRSA, screening on agar with 4% NaCl and oxacillin of 6mkg/ml were used to confirm the received data. Methods of antibiotic resistance definition and selection of the tested antibiotics was carried out according to Methodical guides 4.2. 1890-04 [3], a number of betalactame antibiotics was studied additionally. In comparison of two alternative indicators (MRSA and MSSA strains) difference reliability was defined with the criteria х2 [7].

Research results. Nasopharyngeal bearing of S. aureus was revealed among 321 employee of TPI (3,4%) and among 102 (1,9) healthy persons. A significant difference (p < 0,05) in specific weight of MRSA was registered in two studied groups: among medical personnel - 13,7% (44 strains of 321); among healthy women - 4,9% (5 strains of 102). Antibiograms were studied among all of 49 MRSA and, selectively, among 110 - of isolates from nasopharynx of medical personnel. Oxacilline-vulnerable S. aureus in 100% of cases were sensible to vancomycin, and then, in decrease, the smallest number of resistant MSSA was registered for fusidine, levofloxacin, rifampicin, and doxycycline. Generally, sensitivity of MSSA to a prevailing majority of antibiotics was on a high level - to macrolids and lincosamids (88,6-61,0%), to fluoroquinolones (91,7-82,2%), betalactams (71,6-80,0%).

While studying MRSA, the results differed significantly from the previous ones, though vancomycin, as for MSSA was 100%-effective. Oxacillin-resistant S. aureus showed sensitivity to representatives of betalactam class in limits from 18,4% (ampicillin) to 62,5% (ceftazidime).

A comparison of the two studied strain groups is shown in table.

As it is shown, statistically-reliable differences referred to almost all betalactam antibiotics (except ceftazidim) and many antibiotics of other groups. The greatest was the difference in number of strains that are resistant to ampicillin - 81,6% for MRSA and 21,8% for MSSA (p < 0,01). Resistance indexes were more than two times higher against such antibiotics as amoxiclav, cefazolin, cefuroxime, ceftriaxone, erythromycin, ciprofloxacin, doxycycline, and levomycitine (p > 0,05 and p < 0,01). The most effective preparations against MRSA and MSSA, except vancomycin, were fuzidine (6,1 and 5,0% of resistant) and clindamycin (11,5 and 11,4%). Thus, it has been established that in terms of the studied region nasopharyngeal bearing of S. aures among personnel of TPI of surgery profile is low (3,4%) but exceeds this indication among healthy people who are outside hospital environment almost two times (1,9%). Along with that, a significantly higher specific weight of dangerous MRSA-variants was revealed among inner-hospital isolates S. aureus (13,7%) than among outer-hospital isolates (4,9%), as well as their higher resistance against antibiotics. It has also been found that carried staphylococcus that refer to MRSA, unlike MSSA, apart from resistance against betalactam abtibiotics, have an expressed resistance against antibiotics of different groups. All MRSA and MSSA strains preserve sensitivity to vancomycine.

Resume. Frequency of nasopharyngeal bearing of S. aureus by medical personnel of surgery clinics in terms of city of Ugrench of Khoremsk region of Uzbekistan equaled 3,4% (321 of 9531 studied persons in three years); same index among healthy people out from hospital environment equaled 1,9% (102 of 5329 persons). A significantly higher specific weight of MRSA (44-13,7%) was revealed among inner-hospital isolates in comparison to outer-hospital isolates (5-4,9%). Among 49 MRSA and, selectively, among 110 MSSA sensitivity to 18 antibiotics was studied from nasopharynx of medical workers. It has been shown that resistance was reliably higher (p < 0,05 and p < 0,01) among MRSA than MSSA against betalactams (amoxiclav, cefazolin, cefuroxime, ceftriaxone) and antibiotics of other groups: against erythromicine (65,3 and 34,5%), ciprofloxacin (37,6 and 14,5%), doxycycline (35,0 and 10,9%), and levomecitin (59,2 and 23,6%). All MRSA and MSSA strains preserve 100% sensitivity to vankomicin, and prevailing majority - to fuzidin (only 6,1 and 5,0% of resistant) and clindamycin (11,5 and 11,4%).

The work is submitted to the Scientific International Conference «Research on the priority of higher education on-directions of science and technology», on board the cruise ship «MSC Musica», June, 10-17, 2012, came to the editorial office оn 10.05.2012.