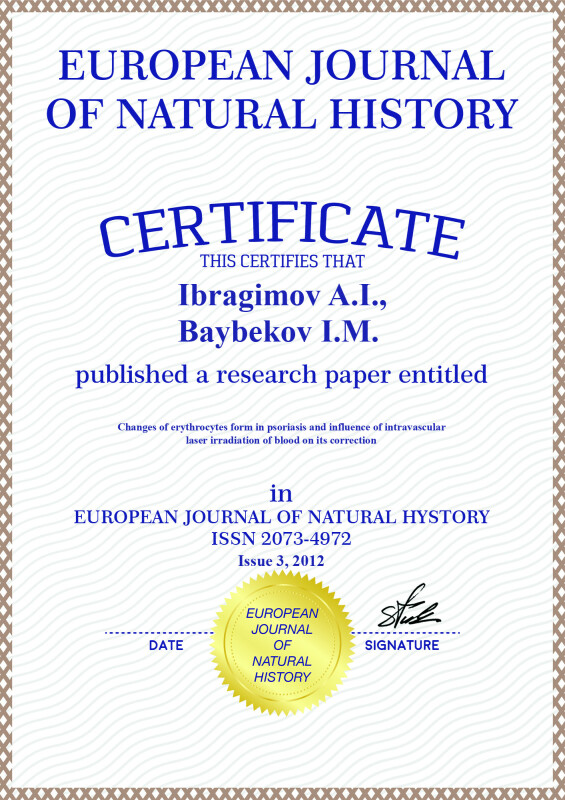 Article in PDF
2168 KB
It is shown by method of light microscopy, thick drop and morphometry, that marked shifts in proportion of discocytes – normal RBC and pathological forms takes place in peripheral blood of patients with psoriasis. It was revealed, that the changes occur more in the blood obtained from psoriatic plaque than in the blood from finger. Intravascular irradiation of blood leads to normalization of discocytes and pathological RBC as in peripheral blood, as well as in blood obtained from psoriatic plaques.

Fundamentals of therapeutic action of low-intensive laser irradiation (LILI) are the anti-inflammatory, anti-allergic and immunostimulating effects on the organism [1-3].

Intravascular laser irradiation of blood (ILIB) is the most effective method of laser therapy. The clinical efficacy of ILIB in the treatment of psoriasis, and especially its arthropathic form was established. [2, 3, 6, 7].

Erythrocytes are the most numerous and most differentiated cells of human body. They react to different pathological conditions, including diseases of the skin. Reaction of erythrocytes primarily, reflected as a lower proportion of discocytes - the main form of the red blood cells (RBC) in norm and increased of proportion their pathological forms - stomatocytes, echinocytes and of other [1].

However, alterations of the shape of RBC in psoriasis, as in the peripheral blood, and blood from the lesion zone were not studied. The influence of ILIB on erythrocytes, used in complex treatment of patients with psoriasis, was not studied as well.

The purpose of this study was to examine forms of erythrocytes in the area of psoriatic plaques and in peripheral blood, their changes in complex treatment of with application of ILIB.

Studies of anamnestic data have shown that 16 patients had prior hepatitis A, carried out in childhood. At the time of examination, 11 patients were identified to have hypoacidic gastritis, 8 patients had cholecystitis (according to USI data), 2 patients had moderate degree anemia, and 1 patient had chronic pyelonephritis. In this regard, a comprehensive treatment, along with ILIB was initiated: Essentsialle Forte capsules, tablets of Allachol, Gros-fillin (pentoksifilin), etc. Topically - sinaflan ointment.

«Matrix - VLOK», (produced by a research - research center «Matrix», Russia) was used for ILIB purposes. It has the head KL-VLOK (output power 1,5 MW, the wavelength of 0,63 microns, exposure 20 min). Intravenous irradiation was carried out using special light guide and with Teflon-coated needles KIVL-01.

The procedure ILIB (output power was 2 mW, wavelength is 0,63 μm, exposure 15 minutes) was performed on a daily basis. There were 10-15 sessions in a course.

Evaluation of the ILIB influence efficacy was judged by the change in the ratio of peripheral blood erythrocytes. For that purpose, we used scanning electron microscopy (SEM) and the express - method of «thick drop» (EMTD).

The technique of EMTD was developed in the laboratory of pathologic anatomy of RSCS named after acad. V. Vakhidov, Republic of Uzbekistan. It is patented in the patent offices of the Republic of Uzbekistan «Method of determining the shape of RBC» № МКИ 6 and 61 B 10/00, as well as the software - «Express diagnosis of RBC forms» № ED-5-05. To do this, the pad of ring finger or human psoriatic plaques punctured with scarificator and 2-3 drops of received blood are placed in 2 ml fixating 2,5% solution of glutaraldehyde prepared on phosphate buffer (pH 7,4). A drop of fixed unstained blood then placed on a slide and covered with a coverslip.

The proposed technique, allows saving the natural state of erythrocyte to a certain extent and having them approximately same with those in the vascular lumen. This, in turn, facilitates more adequate assessment of the erythrocytes´ functional morphology. This method is applicable as for qualitative study of erythrocyte forms, as well as for morphometric study of ratios of normal and pathological forms.

It should also be emphasized, that using this method, the objective morphometric evaluation of RBC deformability can be obtained within 10-15 minutes with a simple light microscopy. This makes it possible, to monitor the structural and functional status of erythrocytes and other blood cells to assess the severity of a pathological process and the adequacy of the treatment. Previously conducted comparative studies of the erythrocytes counting in peripheral blood specimens with SEM and EMTD, have shown reliability of the last [1].

Morphometric counting of normal and pathological forms of erythrocytes ratios were carried out, using at least 1000 erythrocytes in each case with the subsequent statistical analysis. Results are given as mean ± SEM the significance of differences between mean was evaluated by Student t test for unpaired data and by two - way analysis of variance (ANOVA) followed by Duncan´s multiple range test.

The examination and photographing of light microscopic preparations were performed with usage of microscope «AXIOSKOP-1940» (Carl Zeiss), Germany, with a digital camera ProgRess, Capture Pro 2.6, attached to PC Pentium IV.

Peripheral blood erythrocytes in psoriasis were studied with the EMTD after medical treatment without ILIB application and with ILIB application. Blood was also taken from practically healthy volunteers - aged 20-30 years (total 8). Blood sampling was conducted in October - November and March - April in order to minimize the influences of too hot and too cold temperatures.

Studies of blood obtained from areas of psoriatic plaques, showed, that among many forms of RBC, the echinocytes with 3 or more processes were dominating (Fig. 1, 2).

Similar studies of peripheral blood RBC, showed, that compared with the control group, patients with psoriasis had an essential decrease of discocytes´ number and increase in the number of pathological forms of RBC - stomatocytes, RBC with comb, irreversible forms of RBC which are mainly echinocytes (Fig. 1, 3).

The implementation of combined therapy without the use of ILIB lead to improvement in general condition of patients and caused a decrease of specific elements. However, it did not lead to a significant normalization in the ratio of discocytes and pathological forms of erythrocytes (Fig. 4, Table).

ILIB leads to normalize ratio discocyte and echinocytes. The number of discocytes practically rises to the control level, and the number of echinocytes reduces after 10-15 sessions. Rather high stay the numbers of RBC with a comb and especially in the blood from plaques (Fig. 5, 6, Table).

After the course ILIB, patients had remained isolated small nodules which regressed by 20-22 day of combined treatment. In case of scalp lesions subjective sensations were reduced by 5-6 days of treatment, desquamation and infiltration decreased on 14-15 days of treatment. The positive dynamics in patients with lesions of the palms and soles was observed only on 15 day of treatment (decrease of hyperkeratosis, healing of fissures).

Photochemotherapy plays an important role in the correction of immune changes in skin disorders such as psoriasis.

It is known that the change in shape of RBC and transformation of discocytes into various pathological forms associated with shifts of physical and chemical properties and, consequently, the structures of their membranes.

The increase in the number of pathological forms of erythrocytes, leading to increased blood viscosity is the primary cause of its rheological property disturbances and consequently, the cause of microcirculatory disturbances.

Significant changes of peripheral blood RBC and their recovery after treatment was noted in some skin and venereal diseases.

The increase of pathological forms of erythrocytes was shown to take place in primary and secondary. Treatment of different forms of syphilis with extencillin resulted in normalization of the peripheral blood RBC and the dominance of their normal forms - discocytes [1].

Studies carried out by SEM showed, that a decline of discocytes with increase of echinocytes takes place in rosacea.

The course of complex treatment of all rosacea forms led to statistically significant increase in the number of discocytes, whereas the content of echinocytes, stomatocytes and irreversible forms of RBC significantly reduced in peripheral blood [1].

The above mentioned allowed us to make a suggestion, that the change in the ratio of discocytes and pathological forms of erythrocytes may had place in psoriasis as well.

The studies of the ILIB efficacy in the complex treatment of psoriasis showed, that this type of laser therapy, leading to the normalization of the correlation values among normal and pathological forms of RBC, have an effective impact on the clinical manifestations of disease and causes stable remission.