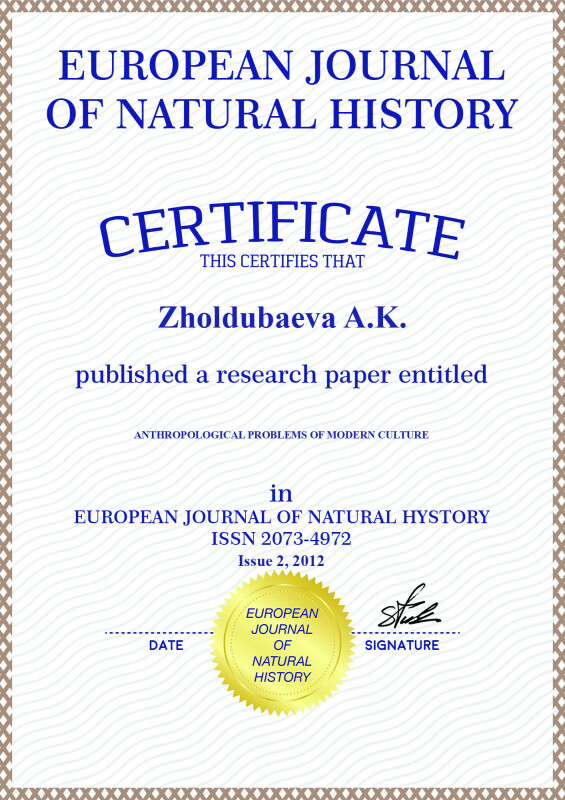 One of the main peculiarities of the modern society is impetuous development of informational technology and system of communications. Worldwide informational web by becoming characteristic trait of civilization is transforming modern space, changes channels of transmission of social cultural experience and abilities of adaptation to new conditions. In such surroundings interaction and behavior of a human does not limit with search, processing and transmission of information, acquisition and translation of knowledge. In the general informational surroundings occurs whole spectrum of human activities and one of the main of them is communicative action. Changes of communicative interactions are mainly shown through their principal interactivity. It opens for humanity new perspectives of development which concise plurality of opportunities and his involvement in them.

To this point analysis of informational technological type factors is becoming high topical which rise questions of humanity and his interaction with his self-made culture. Beside vivid achievements we can notice consequences of such impetuous involvement of huge massive of technical means to human life.

If before surrounding influenced of a human´s character of activity, now it becomes possible to form actively surrounding according to individual requirements. If an industrial economics and its culture oriented on ‘middle consumer´ of uniform material benefits and entertainment, then modern digital economics and its informative culture makes possible for consumer individually form set of business and entertainment information and to define individually what and where to listen and to watch. If earlier a person was limited in acquisition of new information , than today with the help of fast and easy access to numerous massive of information our consciousness gets wider opportunities to choose meanings, visions and sounds which he creates according to personal preferring by which he creates new psychological phenomena.

Therefore it would be difficult to find a person who has never thought about modern informational culture and those radical changes which happens with individuals and with cultures. Bit for all that one blesses this phenomena and claims that this the beginning of the new era, and the others regards to them with beware underlining that these changes makes humans´ life com[licated and take people to symbolic world which far from real life. The third group recognizes both opportunities and perspectives which are gained by informative technologies and dangers which are possible to forestall.

Let´s consider in a nut main problems of transformation of cultural special dimension of a human under pressure of developing informative communicative culture.

At second in spite the fact that informational technological processes made great leap in development a human still stays alone though level of his communication has been increasing.

In fourth in conditions when a human constituent becomes defining in all spheres he beomes passive and aloof contemplator of occurrence.

Original refraction of listed problematic peculiarities are included in the roman of V. Pelevin «Generation «P». Let´s quote some examples from his work: ‘When the TV is switched off he become objet number one. It´s just a box with mirror wall to which we are free to watch or not. But when it´s switched on from object number one it turns to object number two. It becomes absolutely another nature phenomenon. For televiewer TV vanishes as material object. TV viewer begins to feel like he is in another area. The issue is just in its presence. May we say that it is televiewer? Mat we say that a person watches TV really watches it? A person does not even have a chance to ask about his real nature...» [1, p. 103-113].

These changes and influences are so significant that people began to speak more frequently about formation of new symbolic (virtual) reality which does not exist as part of a nature or social world but which has its qualities of essence for consciousness of an individual.

Symbolic character of virtual reality is shown through its picturesqueness, and these figures usually have high level of reality. Mode of a ‘virtual human´ supposes transformation of processes of intercourse and communication, transfer of accent from activity to game forms of activity, realization of a person not in objective conditioned but in subjective conditioned reality.

How can happen personalization on a virtual reality and what consequences can we meet in this situation?

The first thing which giver virtual reality is that self affirming person in a society can live several lives. And if a real life gives only one chance for choice of act, then a virtual life give possibilities for changes. For example, a man can live several lives in different time directions, to realize unused opportunities and chances in past, correct his past and as result to change self-appraisal and attitude to himself. It is also possible trying on of actual roles and situations, trying of yourself in new conditions form which can be resulted new self-vision. It´d be possible to see future and project own way. In a virtual life these kinds of attempts can be numerous and each time a person can begin from the very beginning.

According to its specifics virtual reality creates for a person unbelievable opportunities which´s realization can change seriously person´s consciousness. Today there data which proves that modern virtual informative reality destabilize distribution of status and social structure in whole and partially vanishes borders between work and home, between public and personal area. A person´s idea of time and his presence in time process may change and by this he as if fell out fro time stream and his behavior may be inadequate which influence on personal identity. A person by entering to a virtual reality relieves from himself necessity to subdue to definite laws and norms. All these leads to change of idea about himself and later to change of him.

Surely from one point this kind of possibility has a psychological assist for a man by helping to stimulate process of self realization. But all kinds of lies are drained as first or last it will stop to satisfy growing needs. And then it´s appeared need in creation of new illusion.

Thereby it´s created new type of social subject which is less conditioned with physical peculiarities of individual and his group belonging. In virtual expanse occurs limitation of social role and individual of his performer which leads to disruption of social stereotyped masks by which society provided definite performers. Web demonstrates instability of all identifications provided by society and finds out whom wants to be this or that subject in reality according to his choice. In virtual life is ‘switched on´ absolutely new ‘level of freedom´ which gives virtuality absolutely specific ‘vitality´. It becomes element of free formation which totally excludes any parameters given in advance and which is directed at this time only by lows of individual fantasy.

Therefore, forming under influence of virtualization of man activity new traits of a man could not not to influence on changes of human thinking´s character at all. In another word virtual-informative realty simultaneously offers an opportunity for individual to develop his individuality and at the same time it deprives his individualism because of machinery world vision; simultaneously it opens an opportunity for extension of new ways of cognition but at the same time threatens by pernicious influence on consciousness and physics of a man.

Concluding above mentioned, ‘a virtual man´ experiences changes of expanses of cultural meanings and values, an ability of adequate perception of world, mixture of real and game world, which leads to social destruction and alienation. These peculiarities of changes of subjectivity of personal informational culture were already considered by E. Fromm. He described aliened man form other industrialized man as necrophiliac who is mostly attracted by mechanisms artifacts of all alive: ‘...passion to technical tools constituents its real interest to life and absolves a man from all wide set of abilities and functions by which he was provided from birth» [3, p. 351].

Thereby we may say that virtual reality by being fruit of a human consciousness considerably influence on the process of his formation, newly puts accents to its parts and sometimes even goes out of control by inflicting practical attacks which leads to deformation and modification of an individual consciousness of modern man. Appearance of a ‘virtual man´ which has an ability of dynamic turn from real life to virtual life and conversely indicates new opportunities and new dangers in formation of individual.

Actively entering in sub consciousness by using symbolics which has support in deep subconscious, informative culture combines conscious and subconscious influence by creating and extending social myths, this peculiar cultural form of description and explanation of reality which got new specific essence in XXIst century.

The work is submitted to the International Scientific Conference «The introduction of integrated models of educational institutions, implementing educational programs at various levels of education», Singapore, December 10-17, 2011, came to the editorial office оn 03.05.2012.